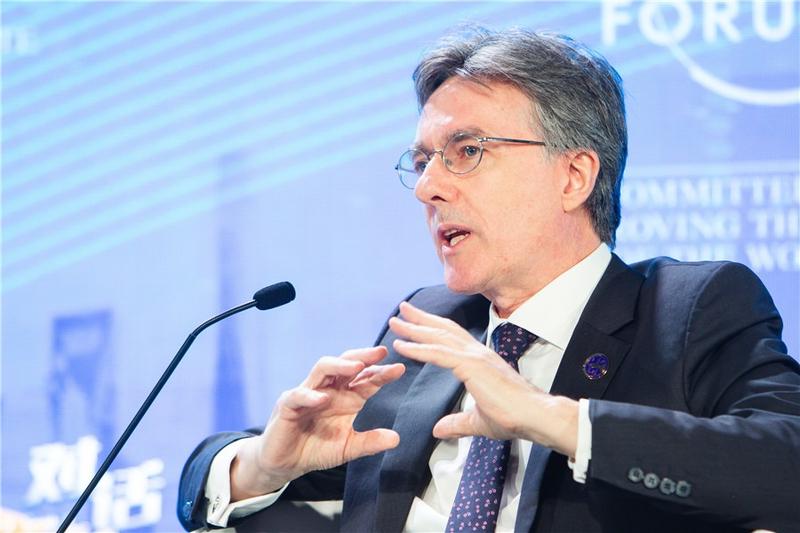 In this file photo, Joachim von Amsberg, vice-president of policy and strategy at the Asian Infrastructure Investment Bank, speaks at the Summer Davos Forum in Dalian, Northeast China's Liaoning province, on July 1, 2019. (PHOTO PROVIDED TO CHINADAILY.COM.CN)

"We see the RCEP as a very important next step to broaden the group of countries that facilitate, simplify and reduce the cost of trade between them," Amsberg told Xinhua Saturday on the sidelines of the ongoing 17th China-ASEAN Expo, held on Nov. 27-30 in Nanning, capital city of south China's Guangxi Zhuang Autonomous Region.

As for post-pandemic economic recovery, AIIB Vice-President Joachim von Amsberg highlighted investment in infrastructure as one of the most effective ways of revitalizing the economy after a crisis, because infrastructure investment has "a triple benefit of short-term income, long-term growth and environmental sustainability"

"The RCEP has the potential to generate even bigger benefits to allow more countries to trade with each other in goods and services, because that trade has the potential to actually lift millions and millions more people out of poverty and into prosperity," he said, adding that the world's biggest trade pact sends "a very hopeful sign at a time when some are doubting the benefits of (free) trade, which we don't believe is justified."

He also mentioned the AIIB's role in drawing "the biggest benefits" out of newly-signed trade agreements such as the RECP, emphasizing further reduction of barriers to the access to markets in all directions between countries, especially for small and medium-sized enterprises (SMEs).

"I do emphasize in particular the access to markets for small and medium enterprises (for their) participation (in) digital marketplaces, and trade and services, which is just as important as the reduction in tariffs is for large enterprises that are trading in commodities or industrial goods," Amsberg said.

He pointed to the great potential of free trade agreements like the RCEP to open up more opportunities for SMEs that both offer services across boundaries and participate in goods trade conducted on digital platforms.

"I do think the next step of regional integration is that these e-commerce platforms could become regional platforms where more trade could occur across boundaries and then open up even more opportunities for smaller companies to benefit from the business they can do in neighboring countries. For that I think free trade areas provide a very, very important basis," he noted.

"So once economies reach the stage where they have conquered the health emergency, I think we (can) start the economy by investing in infrastructure, addressing these big gaps in transporting, energy and data connectivity, and also (in) water and sanitation," he said.

In that regard, he pointed out that infrastructure investment, first of all, provides short-term employment, as the construction of infrastructure is "very much a source of income." Then it's an opportunity for laying the foundation for a stronger growth of the economy.

"And finally, (many) countries are firmly committed to implement(ing) the Paris Agreement, changing toward a carbon neutral economy, which requires huge investments in energy systems and transport systems," he explained. "Those investments, I think, are very much aligned with the infrastructure investments that need to be undertaken."