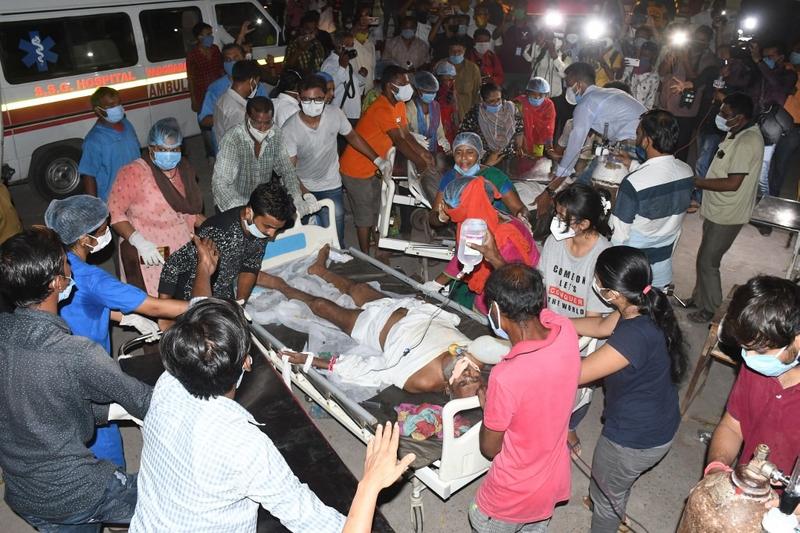 Medical staff attend COVID-19 coronavirus patients after a fire broke out inside a ICU ward at the Sir Sayajirao General Hospital (SSG), in Vadodara, some 110 kilometers from Ahmedabad on Sept 8, 2020. (PHOTO / AFP)

AHMEDABAD - Five patients were killed in India on Friday in a fire that broke out in a COVID-19 ward, the fourth blaze in a novel coronavirus hospital since the outbreak began, which drew angry questions from the Supreme Court.

In August, eight COVID-19 patients were killed in a fire in the ICU ward of a hospital in Ahmedabad, the largest city of Gujarat

The early morning blaze in Rajkot city in the western state of Gujrat gutted the intensive care unit (ICU) of the private hospital, television footage showed. The most likely cause was an electrical short circuit, said government official Udit Agarwal.

India has recorded 9.3 million infections, the second-highest in the world after the United States, and more 135,00 deaths. On Friday, the health ministry said it reported 43,082 new cases and 492 deaths in the past 24 hours.

The latest fire angered India’s top court, which asked both the federal and state governments to submit a detailed reply on recurring fires in COVID-19 hospitals.

In August, eight COVID-19 patients were killed in a fire in the ICU ward of a hospital in Ahmedabad, the largest city of Gujarat.

Prime Minister Narendra Modi, who hails from the state, said on Twitter that he was pained by the loss of lives on Friday.

Modi will visit three companies working on coronavirus vaccines, including one in Gujarat, on Saturday, his office said in a post on Twitter.