By Zhou Huiying in Harbin and Liu Kun in Wuhan 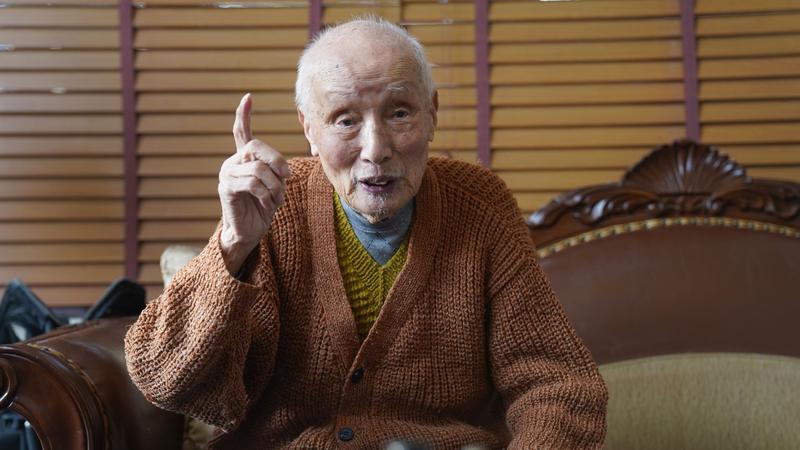 Yu Liangshi talks about his experiences during the War to Resist US Aggression and Aid Korea (1950-53) at his home in Wuhan, Hubei province. (PENG NIAN / FOR CHINA DAILY)

Seventy years after the War to Resist US Aggression and Aid Korea (1950-53), Yu Liangshi still keeps memorabilia about the conflict in his home in Wuhan, Hubei province.

We have seen much better living conditions in recent decades. But we must not forget history and we should work hard to make contributions to social development.

Yu Liangshi, veteran of the War to Resist US Aggression and Aid Korea

Two military medals, a handkerchief and an enamel cup given to the Chinese soldiers by the Koreans printed with the appreciative phrase "for the loveliest people", are the 96-year-old veteran's most precious treasures.

"My father has occasionally talked to me in recent years about the war when I asked him about it," said Yu's youngest son, Yu Tantan."He still clearly remembers his experiences and always tells me something new about the history of the war, life in the military and fighting for peace."

Yu Liangshi was born in Huoshan county, Anhui province, and started studying at Anhui University in Wuhu in 1945. After graduating from the university in 1949, he became a court official. In March 1950, Yu Liangshi joined the military.

ALSO READ: For remembrance and peace

Several months later, he enlisted in the Chinese People's Volunteers after the Korean War broke out in June 1950, and was accepted as a correspondent because of his education. Yu Liangshi said he never held a gun or fought on a battlefield.

"At that time, all the young people including me were full of zeal to protect our homes and country," he said.

"However, I believed very few people could imagine the difficulties and challenges during the war."

In September 1952, he was among troops that crossed the Yalu River, the border between China and the Democratic People's Republic of Korea, to join the war.

"The language barrier was the first difficulty we had to face," Yu Liangshi said. "We were asked to learn more than 100 Korean words and around 40 sentences within a few days when we stayed in the border city of Tonghua (in Jilin province)."

To quickly acquire the correct pronunciations of commonly used Korean words and sentences, Yu Liangshi and his army comrades labeled them with pinyin and Chinese characters.

It was an extremely cold winter and the temperature was as low as-40 C. When we were outside, the air we breathed soon formed ice on our eyebrows and beards.

Yu Liangshi, veteran of the War to Resist US Aggression and Aid Korea

"We also tried several methods, such as using a word in a sentence, which might help us better remember it," he said.

In October 1952, The CPV troops were ordered to hold the position of Triangle Hill, known in China as Shangganling, which was under heavy artillery and air attack by the enemy.

"It was an extremely cold winter and the temperature was as low as-40 C," Yu Liangshi said. "When we were outside, the air we breathed soon formed ice on our eyebrows and beards."

His strongest memory of the fighting was a battle in March 1953 after Triangle Hill had been held.

"It was snowing heavily that day and several soldiers of the attacking detachment clenched their Soviet-made rotary submachine guns in the trench, wearing white cloth as camouflage," Yu Liangshi said. "With an order to 'Go!', nine soldiers leapt out. The enemy trench was only 20 meters away from ours. The detachment killed more than 10 enemy soldiers, but three of my young comrades lost their lives."

Yu Liangshi wrote an article about the battle, which was published in a military newspaper and greatly increased troop morale.

During the war, haircuts and baths were luxuries for Chinese soldiers. In the first three months after they entered the DPRK, only a few of the soldiers took a bath.

"During the long-distance marches, we all sweated and became terribly smelly," he said."Almost everyone had lice in their clothes and we called them the 'glorious worms' and the 'revolutionary worms' because we thought they were the signs of our hard work."

Around the time of Spring Festival in 1953, the soldiers enjoyed a hot bath in the forest after finding a gasoline drum and burning pine branches to boil water.

"Each soldier could only wash for 10 minutes and after two finished, the water was already covered with a thick layer of muck and smelled terrible," Yu Liangshi said.

"Despite that, we all thought it was the most comfortable moment during the war."

In April 1953, he returned to China and became a teacher at a middle school in Qufu, Shandong province. In 1978, Yu Liangshi was transferred to the education department of Jingzhou, Hubei province.

He retired in 1987 and started writing his memoirs about the Korean conflict in 2000. He said the memoirs would not be presented from a grand perspective, but "the personal experience of an ordinary veteran". Yu Liangshi said they are expected to be published later this year or next year.

"We have seen much better living conditions in recent decades. But we must not forget history and we should work hard to make contributions to social development," he said.