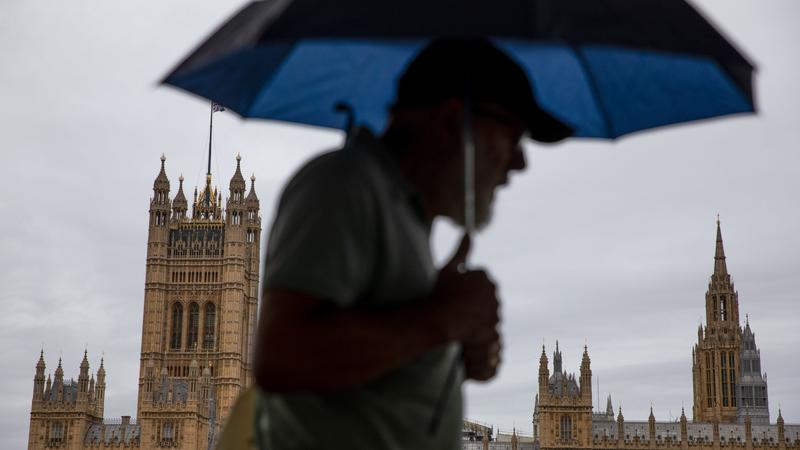 A pedestrian carrying an umbrella to shelter from the rain passes the Houses of Parliament in London, UK, on June 30, 2020. (SIMON DAWSON / BLOOMBERG)

The United Kingdom's Department for International Trade has reaffirmed its commitment to bilateral relations with China, as the triple concerns of Brexit, the coronavirus pandemic, and geopolitical tensions affect commercial activity between the two nations.

John Edwards, the department's trade commissioner for China, said the UK "welcomes Chinese investment" and that Britain remains open for business as it navigates its way out of the European Union.

Edwards was speaking at the online launch of a report from the China Chamber of Commerce in the UK, or CCCUK, on the development of Chinese enterprises in Britain.

"China is an important member of the international community,"Edwards said. "Its size, rising economic power, and influence make it an important partner in tackling the biggest global challenges. We have a policy of engagement with China and our approach will remain consistent, even if difficulties emerge."

Speaking at the launch event, China's Ambassador to the United Kingdom, Liu Xiaoming, said both China and the UK are about to embark on "new stages of development", with the Brexit transition window closing on Dec 31 and China poised to replace high-speed growth with high-quality growth during the period of its 14th Five-Year Plan (2021-25).

The pandemic reminds us once again that the world is a community.

Liu said China and the UK are "important business partners" and emphasized the need to "strengthen confidence in China-UK business cooperation".

"The pandemic reminds us once again that the world is a community," Liu said."A certain country, out of its political agenda, has been clamoring for economic decoupling, and parallel systems. However, it has become increasingly clear that globalization is an irreversible trend of history and the only road to progress."

In its report, the CCCUK surveyed 75 Chinese businesses in the UK, analyzing their health and longevity and assessing past and future challenges for growth.

The business chamber revealed a strong contribution to the UK from the Chinese business community. Three-quarters of companies have reinvested all or the majority of their profits generated by their UK operations back into the UK, while 60 percent of businesses employed fewer Chinese employees than those of other nationalities.

Companies identified the impact of the geopolitical landscape on China-UK relations as the biggest challenge in conducting business in the UK, followed by cultural differences between the two countries.

Vince Cable, a former secretary of state for business, innovation and skills, said the UK government's decision to ban Chinese telecommunications company Huawei from British mobile networks may have a negative impact on bilateral business relations.