Vaccines offer glimmers of hope as world plans for future 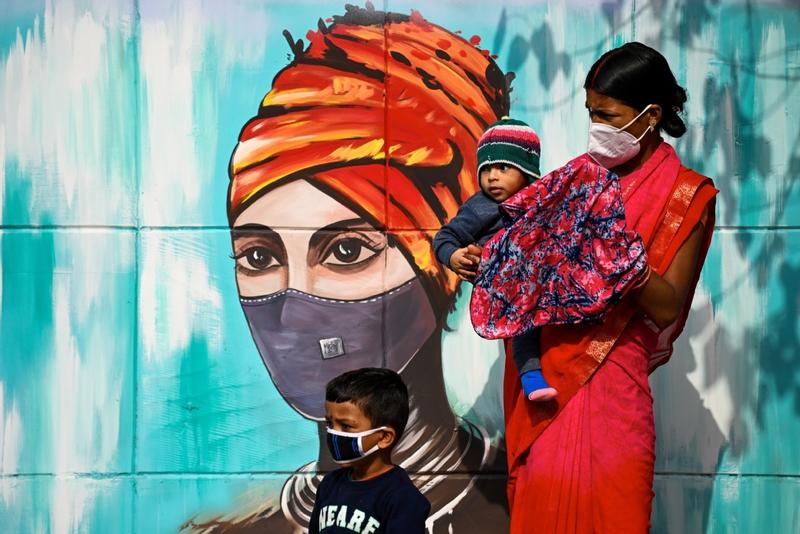 A woman and her children stand in front of a mural in New Delhi on Monday. India has the second-highest numbers of cases in the world after the US. (SAJJAD HUSSAIN / AFP)

France was expected to loosen coronavirus restrictions on Tuesday as the head of a major airline said proof of vaccination will likely become the only way people can fly in a post-pandemic world.

Hopes over COVID-19 vaccines have given a boost to virus-weary citizens across the globe, but the disease remains rampant and world leaders are urging people to be patient.

The world is still engulfed in the unprecedented health crisis which has shattered economies, infected almost 58.9 million people and left nearly 1.4 million dead

French President Emmanuel Macron will address the country－currently under lockdown－to announce a reworking of the rules following a drop in infections.

Macron's televised speech comes a day after British Prime Minister Boris Johnson said thanks to a major vaccine breakthrough, saying "the escape route is in sight "from the coronavirus crisis.

Johnson said although the "scientific cavalry" was arriving, he warned "Christmas cannot be normal and there's a long road to spring".

The world is still engulfed in the unprecedented health crisis which has shattered economies, infected almost 58.9 million people and left nearly 1.4 million dead.

AstraZeneca and Oxford University on Monday said their drug had proved on average 70 percent effective at stopping the virus after trying it on 23,000 people, days after tests of two other drugs suggested they were more than 90 percent effective. China and Russia have also announced the success of effective vaccines.

While World Health Organization Director-General Tedros Adhanom Ghebreyesus hailed the latest batch of results as the light at the end of a "long dark tunnel", he cautioned the world had to ensure drugs were distributed fairly.

"Every government rightly wants to do everything it can to protect its people," Tedros told a virtual news conference from Geneva. "But there is now a real risk that the poorest and most vulnerable will be trampled in the stampede for vaccines."

Australia's Qantas announced that international travelers will need to be vaccinated against COVID-19 to fly, becoming the first airline to suggest such rules could become common across the industry.

Nearly 258,000 people have died nationwide and the caseload is edging toward 12.4 million, according to data from Johns Hopkins University

CEO Alan Joyce said the Australian flag carrier would implement the measure once a vaccine was made available to the public.

"Whether you need that domestically, we will have to see what happens with COVID-19 in the market but certainly, for international visitors coming out (to Australia) and people leaving the country, we think that is a necessity," he said.

The chief executive predicted the rule would likely become standard practice around the world as governments and airlines consider the introduction of electronic vaccination passports.

The United States－by far the worst-hit nation－will celebrate the Thanksgiving holiday on Thursday, and many people plan to spend the time with extended family despite authorities warning they risk exacerbating the spread of the disease already raging across the country.

Nearly 258,000 people have died nationwide and the caseload is edging toward 12.4 million, according to data from Johns Hopkins University.

Stopping short of issuing an outright ban, the US government's Centers for Disease Control and Prevention has for the first time called on Americans not to travel for the annual holiday, which sees families get together over a traditional feast of turkey, yams and cranberry sauce.

Last weekend was the busiest since the start of the pandemic with more than three million people passing through US airports, the Transportation Security Administration said. The agency is responsible for security checks.

"Our pleas for help have fallen on selfish deaf ears," said Cleavon Gilman, an emergency doctor in Arizona, where he said hospitals were "overwhelmed" with patients.

For US airlines, Thanksgiving has been one of the busiest periods of the year.

A total of 31.6 million US citizens flew on carriers in the run-up to the holiday last year. That generated US$8 billion for the industry out of a total of US$247 billion revenue in 2019.

More than 50 million US citizens will travel by various means for Thanksgiving this year, a drop from 55 million in 2019, according to the American Automobile Association.

Chen Weihua in Brussels, Belinda Robinson in New York and agencies contributed to this story.