By Zhao Lei in Wenchang, Hainan 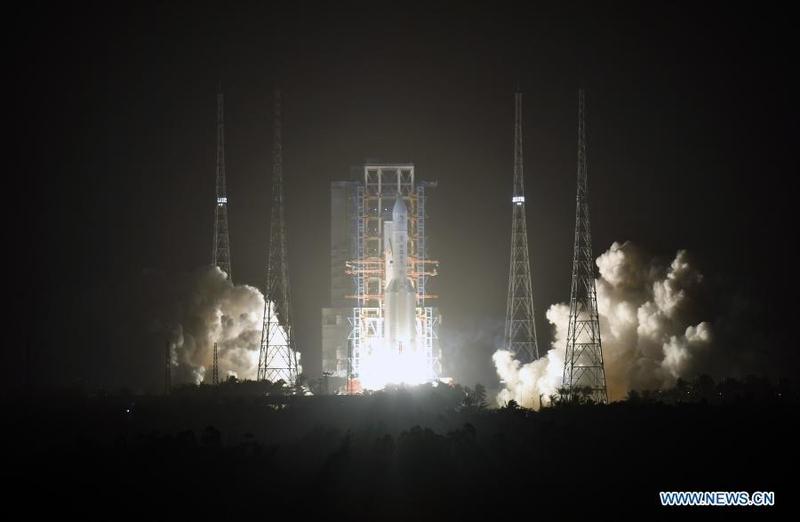 A Long March 5 heavy-lift carrier rocket carrying the Chang'e-5 spacecraft blasts off from the Wenchang Spacecraft Launch Site, on the coast of the southern island province of Hainan, Nov 24, 2020. (GUO CHENG / XINHUA)

China launched a large robotic spacecraft early Tuesday morning at the Wenchang Space Launch Center in Hainan province, tasking it with landing on the moon and bringing back samples 44 years after the last lunar samples were returned to Earth.

A Long March 5 heavy-lift carrier rocket, the biggest and mightiest launch vehicle in China, lifted its 20-story-tall body from the launchpad and soared skyward with a spectacular silver flame at 4:30 am, leaving many spectators at and around the coastal Wenchang center in awe and excitement as the gigantic booster thundered up.

After about 37 minutes into the flight, the rocket successfully reached its destination in space and then placed the 8.2-metric ton Chang'e 5, which has four components－an orbiter, lander, ascender and re-entry capsule－into an Earth-moon transfer trajectory.

The probe will land on the northwestern part of the Oceanus Procellarum, on the western edge of the moon's near side, as "it has never been reached by man or rover," Peng Jing, deputy chief designer of Chang'e 5 at the China Academy of Space Technology, said

The heaviest and largest spacecraft in the nation's lunar probe fleet, Chang'e 5 will fly in the trajectory within the next several days and make some correction operations before conducting a key braking maneuver to avoid accidentally flying past the moon.

After it reaches lunar orbit, the probe will circle the celestial body for a certain period of time and then separate into two parts, with the orbiter and re-entry capsule remaining in orbit while the lander-ascender combination descends toward the surface.

The landing combination will make an engine-assisted touchdown on the moon and later start conducting assignments such as using a cutting-edge drill to obtain rocks from 2 meters beneath the surface and a mechanical arm to gather surface dirt.

If everything proceeds smoothly, about 2 kilograms of stones and soil will be collected and packed in a container inside the ascender.

After the surface operations are done, the ascender's rocket will lift it to lunar orbit to rendezvous and dock with the re-entry module. It will transfer lunar samples to the module and then undock from the latter.

Back on the lunar surface, the lander will continue using its three scientific payloads to carry out surveying and measurements－the panoramic camera is tasked with mapping the topography of the landing site; the infrared spectrometer will determine the physical composition of stones and dirt around the landing site; and the soil measurement instrument will detect and analyze the subsurface structure of the drilling point.

The mission is scheduled to last around 23 days, according to the China National Space Administration. 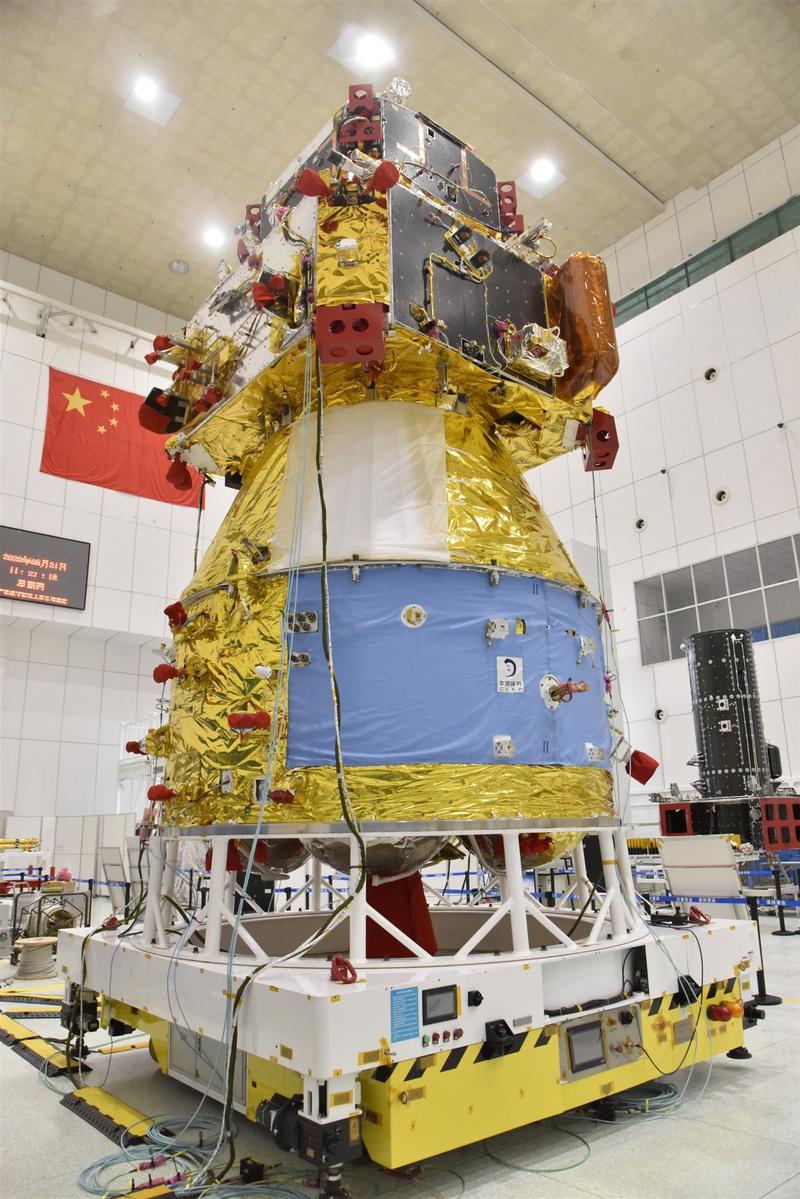 Peng Jing, deputy chief designer of Chang'e 5 at the China Academy of Space Technology, said the probe will land on the northwestern part of the Oceanus Procellarum, on the western edge of the moon's near side.

"This landing site was selected because it has never been reached by man or rover and also because scientists are interested in the geological history of that place," he explained.

Peng said designers devised many cutting-edge, delicate instruments for Chang'e 5, including the "excavator" mechanism at the end of the mechanical arm and the transfer equipment on the ascender and the re-entry module.

He mentioned that designers installed two types of collection tools on the probe in hopes of obtaining various types of samples to facilitate scientific studies.

If the Chang'e 5 mission ends successfully, it will be China's first space activity to retrieve extraterrestrial substances and will also make China the third nation in the world to bring lunar samples back after the United States and the then Soviet Union

Another consideration is that two types of methods will reduce the risk of failure and improve the probability of success, he said.

If the Chang'e 5 mission ends successfully, it will be China's first space activity to retrieve extraterrestrial substances and will also make China the third nation in the world to bring lunar samples back after the United States and the then Soviet Union.

Moreover, the mission's success will make Chang'e 5 the world's first lunar sample-return spacecraft since August 1976 when the Soviet Union's unmanned Luna 24 brought 170.1 grams of lunar samples back to Earth.

According to the space administration, the Chang'e 5 mission is intended to fulfill several objectives.

In terms of space engineering, it will demonstrate and verify technical plans and apparatus for autonomous lunar sampling and packing, moon-based launching as well as lunar orbital docking.

In the scientific field, it will investigate the landing site's geological and topographical features, and enable scientists to analyze the structure and physical traits of lunar samples so they can deepen their research of the moon's origin and evolution.

The administration added that the mission will also help to foster the country's knowledge, technology and talent pool for future manned missions to the moon and other deep-space expeditions.

Pei Zhaoyu, a spokesman for the mission, said if the mission is successful, it will be a milestone in the nation's lunar exploration endeavors and will show the world China's scientific, technological and engineering capabilities.

Furthermore, Chang'e 5 will strengthen the nation's status and influence in the international space community, pave the way for the country's future lunar expeditions and boost its space science, and will also offer more opportunities to lunar researchers around the world, Pei said.

Scientists around the world are welcome to participate in the research of the lunar samples brought back by the mission. China will publish a set of guidelines about the use and distribution of the samples after the mission, said Pei, who is deputy director of the administration's Lunar Exploration and Space Program Center.

His remarks were echoed by Xing Qiang, founder of Micro-Rocket Union, a nonprofit space research organization in Beijing.

Currently, China has only 1 gram of lunar sample－a tiny piece of rock－that was collected on one of the US Apollo missions ... For a long time we had been unable to collect more lunar samples by ourselves, but now Chang'e 5 will bring as much as 2 kg of stones and dirt back to us. You can imagine what this will mean to our scientists.

Xing said if everything goes well in the mission, about 2 kg of lunar rocks and soil will be sent back and that will mean a lot to Chinese scientists, not only scientifically but also emotionally.

"Currently, China has only 1 gram of lunar sample－a tiny piece of rock－that was collected on one of the US Apollo missions. The stone was later divided into two equal pieces. One piece was used for scientific study and the other was sent to the Beijing Planetarium for public display," he said. "For a long time we had been unable to collect more lunar samples by ourselves, but now Chang'e 5 will bring as much as 2 kg of stones and dirt back to us. You can imagine what this will mean to our scientists."

The samples to be retrieved by the Chinese vehicle will bring abundant benefits and opportunities to Chinese scientists and their foreign counterparts, he said, adding that the mission also will earn China a place in the elite club of space powers able to carry out deep-space sample return operations.

The mission was originally scheduled to be completed by the end of 2017, but the plan had to be postponed due to technical problems with the Long March 5 rocket, which had a launch failure in July that year.

Since then, engineers had continuously improved the mission's overall reliability and spared no efforts to ensure the program can eventually succeed, said Ye Peijian, a leading scientist in deep-space exploration at the China Academy of Space Technology.

Before Chang'e 5, 20 successful soft landings have been made on the moon by the US, the Soviet Union and China. The most recent, and still operational, are China's Chang'e 3 and Chang'e 4 missions.