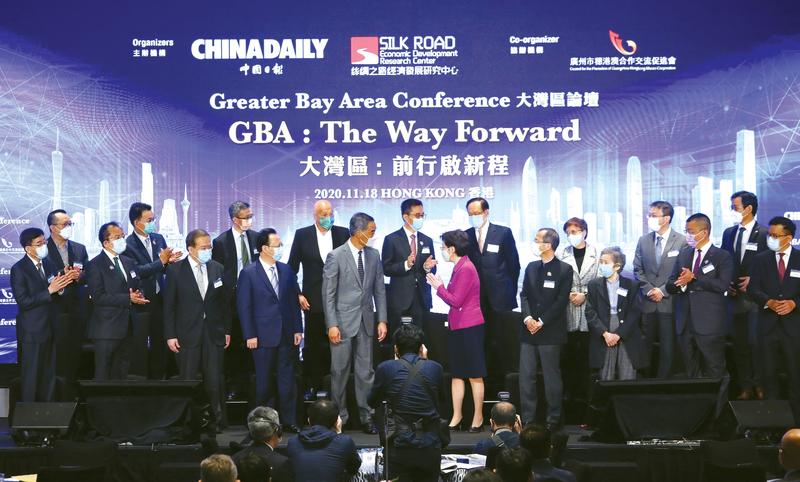 The Hong Kong Special Administrative Region should take a three-pronged approach to find its place in the Guangdong-Hong Kong-Macao Greater Bay Area, and its participation in this national development blueprint should be guided by adhering to the “one country, two systems” policy. This was a key message at the recent Greater Bay Area Conference.

The conference, GBA: The Way Forward, organized by China Daily and the Silk Road Economic Development Research Center, was held on Nov 18. Over 400 people including government officials, business leaders and members of academia exchanged their views on how to enhance collaboration among all sectors in the Hong Kong and Macao SARs and Guangdong province.

“It is time that we prepare the way forward for Hong Kong in this exciting region. I see three parts to this preparation, which are research, messaging and community engagement,” Leung Chun-ying, vice-chairman of the National Committee of the Chinese People’s Political Consultative Conference, said in his address.

Leung said through research, the city can give the most comprehensive and factual understanding of the latest developments and policy publications in all sectors and in all cities in the Bay Area. The second stage, messaging, is to broadcast the results of the research findings comprehensively, effectively and objectively. The final step is community engagement, such as in schools, professional bodies, trade industries and investment communities aiming to change mindsets and attitudes.

Leung added that Hong Kong can facilitate collaboration between mainland scientists and Hong Kong investors to bring new capital to laboratories and startups on the mainland. The city also can facilitate direct contacts between businesses and government.

Innovation and technology should be put at the top of our agenda, the chief executive added.

This calls for out-of-the-box thinking in Hong Kong’s cooperation with the mainland cities, particularly Shenzhen, Lam said. Hong Kong should play a more proactive role in identifying new opportunities for joint actions. And finally, greater emphasis should be placed on supporting young people and nurturing talent.

Zhou Shuchun, a member of the Standing Committee of the National Committee of the Chinese People’s Political Consultative Conference and China Daily publisher and editor-in-chief, said via a video link from Beijing: “The central government’s new dual-circulation development program is expected to mark a major shift in the country’s economic strategy, and the 11-city cluster in the Bay Area will, doubtless, play a key role in it.”

Annie Wu Suk-ching, honorary chairwoman of Beijing Air Catering, said Hong Kong can utilize its professional expatriates and expertise in finance, international litigation and mergers and acquisitions to bring overseas businesses to Hong Kong first before they start doing business in the Bay Area. The city can also bring technologies from overseas institutions into the Bay Area by using Hong Kong as a stepping-stone.

“This was always a useful and important role for Hong Kong in the past, as it is in the present and also will be in the future,” Wu said.

The conference included three panel discussions to discuss healthcare sector development in the Bay Area, the role of technology infrastructure as the new engine of economic growth and the role of Hong Kong in the Bay Area blueprint.

Business and government leaders taking part in the discussions said Hong Kong should use its strengths as it takes up a larger role.

“Hong Kong’s role as an international financial center will not change. But what we do in the Bay Area should change,” said CK Chan, chairman of WeLab Bank and senior advisor of WeLab, WeLab Ltd.

Although the neighboring city of Shenzhen has developed its own financial market, Hong Kong still plays a vital part in the market, Chan said.

But Chan noted that Hong Kong should do more to facilitate the connectivity of financial markets between Hong Kong and the Chinese mainland so that Bay Area residents have greater access to financial services in the SAR.

He emphasized the importance of developing fintech as the future of financial development in Hong Kong. “In the future, the competitiveness of the financial industry will not just be defined by the number of initial public offerings. It will also be defined by how technology can really help you do financing and help you do investing and fundraising,” Chan said.

“We have been so complacent about our system. We think it’s perhaps the best in the world. Maybe it is. But still there’s room for improvement,” he said.

As the country now makes great efforts to promote the “dual-circulation” development pattern, Hong Kong should take full advantage of its edges to fit itself into the national strategy, Hung said.

The “dual-circulation” model makes the domestic market as the mainstay while allowing domestic and foreign markets to boost each other.

Hung added that one thing that Hong Kong can do is attract more talent through the city’s strong academic competence and internationalized environment.

Allan Zeman, chairman of Lan Kwai Fong Group, said he believes the most important thing for Hong Kong is to think positively.

“From past to present, we build brands in Hong Kong and we take them to the whole country. And these brands of Hong Kong are something accepted worldwide,” he said.

“Now when we talk about the Bay Area, we’re talking about an incredible market with 72 million people and a GDP of US$1.68 trillion, which is mind-boggling. Our brands from Hong Kong will continue (to grow) and (we should) look beyond the city’s 7.5 million people. Look at one big global Eastern market.”

Zeman said the recent signing of the Regional Comprehensive Economic Partnership by 15 Asia-Pacific countries would shift the global business landscape.

“The power of the West is going to come to the East. In the past, Hong Kong was always looking to and learning from the West. But now we can see the East is where the future is. The system here works, and it’s really something Hong Kong can benefit from,” he said.

“If you want to make money and you want to really be successful, I urge you to come back to Hong Kong, and this will be the place where you’ll thrive.”

Other panelists called for greater collaboration between Bay Area cities to promote integrated development of the southern region.

Steve Chuang, deputy chairman of the Federation of Hong Kong Industries, said the manufacturing sector in Hong Kong has adopted a “4R” strategy — response, reset, revive and reinvent — in the past two years to deal with various problems arising from the trade tensions and the coronavirus pandemic.

He said the Bay Area will become a home market for Hong Kong companies, as they are now selling to the mainland some products that they used to export to overseas countries.

Wang Peng, assistant to the president at Wuyi University in Jiangmen, pins high hopes on the prospect of Hong Kong-Jiangmen cooperation.

“Many Hong Kong people’s ancestral homes are in Jiangmen, and these kinds of connections have tied Jiangmen and Hong Kong closely,” Wang said.