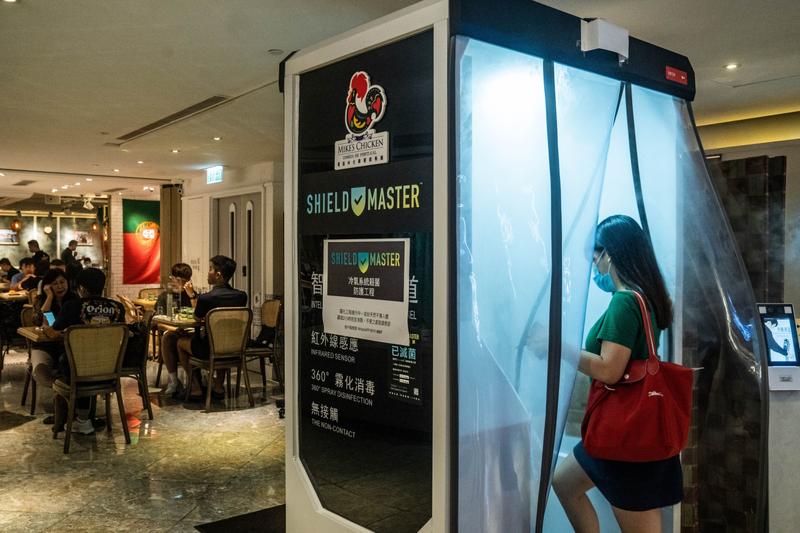 A customer walks through a sanitizing booth while entering a restaurant at Tsim Sha Tsui in Hong Kong, on Sept 11, 2020.  (PHOTO/BLOOMBERG)

HONG KONG - The Hong Kong government will tighten social-distancing restrictions and introduce mandatory testing for some groups as locally transmitted COVID-19 cases rose in the past week.

The announcement came as the city saw eight new coronavirus cases on Saturday, including one case with an unknown origin.

In a press conference in the afternoon, Secretary for Food and Health Sophia Chan Siu-chee said anyone who refuses a compulsory test faces a penalty of HK$2,000 and will be issued with an order to take the test. They face a jail term of up to six months and a fine if they still refuse to take the test. The new regulation takes effect from Sunday.

Chan also announced the tightening of social distancing measures to be effective Monday. The number of patrons allowed to be seated at a table in restaurants will be capped at four while the number will be capped at two at bars. Eateries will only be allowed to provide dine-in services from 5 am to midnight.

Restaurants, bars, night clubs and swimming pools will have to limit their customer capacities at 50 percent, down from the current 75 percent, Chan said.

Patrons are also banned from eating or drinking away from the tables.

Five of the eight new cases reported on Saturday were imported, said Chuang Shuk-kwan, head of the communicable disease branch of the Centre for Health Protection, at the same briefing.

Among the three local infections, two were linked to previous cases while the origin of another one remained unknown.

The untraced case involved a 58-year-old man who lived in Tze Wan Shan with his family and worked as a night-time guard. Three of his colleagues were identified as close contacts and will be placed under quarantine, Chuang said.