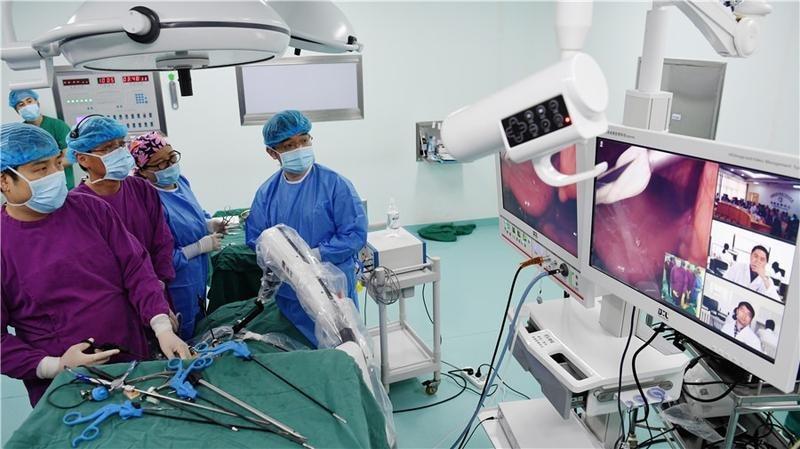 In this undated file photo, surgeons at the People's Hospital in Shitai county, Anhui province, conduct an operation with the help of their counterparts at the Second Hospital of Anhui Medical University via a 5G-assisted medical-services platform. (XU MINHAN / CHINA DAILY)

Measures have been unveiled to bolster the nation's telemedicine network to improve epidemic prevention measures at the grassroots and raise access to healthcare in less-developed areas.

Last year, China's telemedicine network saw 21.72 million patient visits, and more than 24,000 medical institutions nationwide were connected to the network, according to the National Health Commission

A policy document, issued by the Ministry of Industry and Information Technology and the National Health Commission on Nov 3, said the level of internet coverage at grassroots healthcare institutions will be raised by expanding the scale of broadband services and 4G networks in remote and impoverished areas.

The coverage of 5G networks will be expanded to more healthcare institutions to offer better internet connectivity. The blueprint is the central government's latest move to promote telemedicine and bridge the urban-rural healthcare gap.

Last year, China's telemedicine network saw 21.72 million patient visits, and more than 24,000 medical institutions nationwide were connected to the network, according to the NHC.

"The document is a key step toward the establishment of an ideal telemedicine system in China," said Cui Yong, vice-president of the China-Japan Friendship Hospital in Beijing and chairman of an expert panel at the department of dermatology at the National Telemedicine and Connected Health Center.

He noted that the disparity in healthcare between hospitals in first-and second-tier cities and those at the grassroots has seen people flowing to big cities, leaving small hospitals with fewer patients.

Cui added that the gap in the level of medical services between hospitals in different parts of the country could be reduced by telemedicine, which offers remote clinical services and exchanges between practitioners.

One of the major challenges facing the telemedicine system is a lack of application of new technologies, such as 5G and artificial intelligence, with technological levels also varying between hospitals. Those factors are the driving forces behind the document, he said.

He highlighted the need for stronger guidance from the central government and the rolling out of more support policies to integrate telemedicine with the medical insurance system and cutting-edge technologies.

Meanwhile, as hospitals have developed a range of systems for telemedicine, it is important for authorities to push forward the restructuring and unification of such systems to boost connectivity between hospitals and improve efficiency, he said.

"A nationally unified telemedicine system, a key step toward making the system more efficient and diagnoses more accurate, will help raise the level of trust and acceptance among patients," he added.

Cui gave the example of the China-Japan Friendship Hospital, which undertakes functions for the National Telemedicine and Connected Health Center. It provided long-distance diagnoses for severe COVID-19 cases in Wuhan, capital of Hubei province, earlier this year and played a key role in patients' treatment and recovery.

The government will extend telemedicine coverage to all poor counties, connect long-distance diagnostic services to villages equipped to handle them and offer individuals and households access to online lessons about basic healthcare and home management of chronic disease, it added.

Wang Hang, founder and CEO of Haodf, one of China's largest online healthcare companies, said telemedicine has made the services of high-ranking clinicians much more accessible to rural residents and helped reduce their healthcare costs.

Local authorities have employed Wang's company to provide telemedicine services to residents in the country's western areas, including the Ningxia Hui autonomous region.

He noted that internet access is still lacking in some rural areas and many residents do not own smartphones, while awareness of the help available through telemedicine systems is low. These are major obstacles to the promotion of telemedicine in remote areas.

"It is important to extend the reach of telemedicine so people in the rural areas can understand that the services are helpful. Only in this way can we gain more people's trust and promote the development of such services at the grassroots level," Wang said.

Zhu Xingxin contributed to this story.