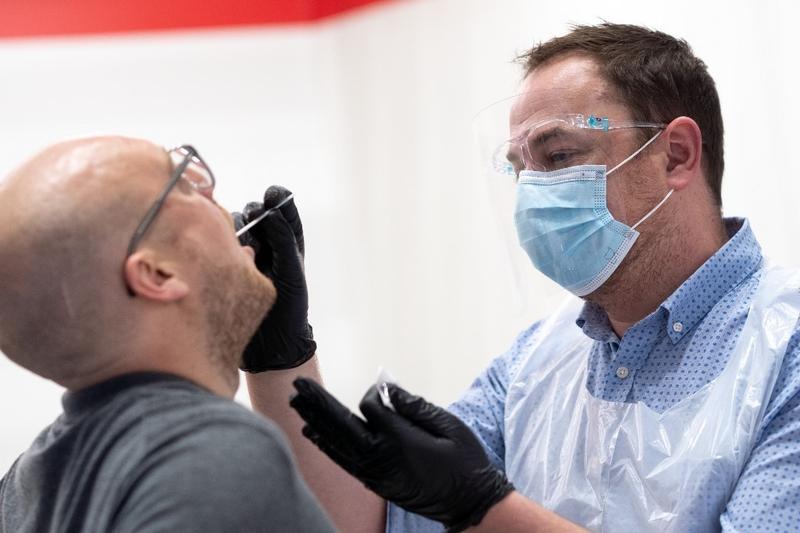 A handout picture released by LHR Airports Limited on Oct 20, 2020 shows a nurse swabbing the throat of a traveller as he adminsters a COVID-19 test in Heathrow Airport in west London. (LHR AIRPORTS LIMITED / AFP)

The rapid test, which is called Oxsed RaViD Direct, was created by a team of 13 scientists at the Oxford Suzhou Centre for Advanced Research, which is a partnership between Oxford University and the Suzhou Industrial Park in Jiangsu province

The hub for the British capital is offering the tests, which can deliver results in under half an hour, to passengers bound for Italy and China's Hong Kong in order to meet pre-departure testing requirements for those regions.

ALSO READ: Airlines working with WHO on testing to replace quarantine

Hong Kong International Airport is also trailing the test, which is called Oxsed RaViD Direct. Speedy detection of COVID-19 in travelers will play a major role in bringing the coronavirus pandemic under control, said Huang Wei, a synthetic biologist at Oxford University who helped develop the technology.

"We felt that rapid testing should be a must for airport screening and our entire team has been working day and night to make this development happen," said Huang. "I am now very pleased to see our tests are actually used at Heathrow and making an impact on safe travel."

The test was created by a team of 13 scientists at the Oxford Suzhou Centre for Advanced Research, which is a partnership between Oxford University and the Suzhou Industrial Park in Jiangsu province.

The team began work on the technology in January, and in August the scientists received a President's Special Award for Pandemic Service, bestowed by the Royal Academy of Engineers in recognition of "exceptional engineering achievements in tackling COVID-19 throughout the UK".

The test works by isolating and amplifying genetic material from the novel coronavirus in saliva samples or mouth or nose swabs. The team chose a form of amplification called reverse transcription loop-mediated amplification, RT-LAMP, to detect viral RNA, rather than the more commonly used polymerase chain reaction, or PCR, process.

Chemical engineer Cui Zhanfeng, who co-led development with Huang, said RT-LAMP is advantageous because it is quicker than PCR, and reactions take place at one constant temperature, whereas PCR requires adjustments in temperature and more machinery.

The Oxford team has formed a spinout company, called Oxsed, which was recently acquired by UK-based DNAFit Life Sciences, which is a subsidiary of Hong Kong-based biotech company Prenetics. Prenetics is in discussions over deploying the test at other major international airports.