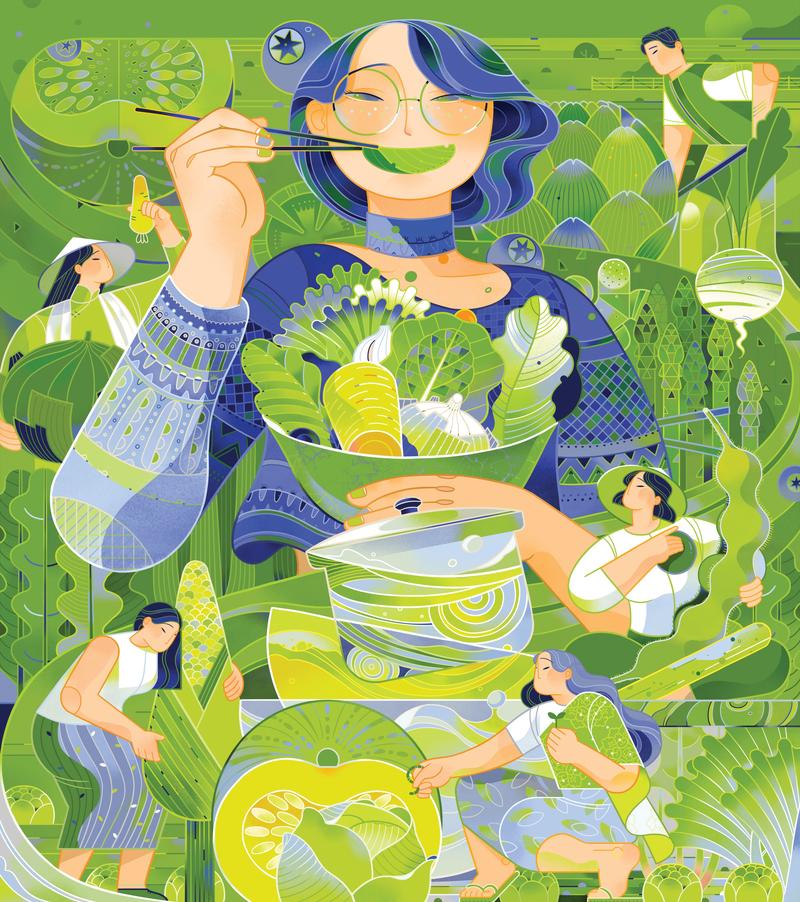 For the past five years, farmer Michael Christian Simon has regularly supplied organic vegetables to a steady clientele of more than 30 families in the Malaysian state of Selangor.

“I started farming for my family, but I soon discovered that it’s a viable and sustainable business,” he said.

While happy that his passion had become a money-spinner, Simon did not expect COVID-19 to bring a windfall.

Soon after the Malaysian government imposed a movement control order, or MCO, in mid-March, his client base surged to more than 100 households as consumers, forced to stay home, bought food online.

Simon had to refuse most of the orders he received as his farm could only produce 150 kilograms of vegetables a week. While the government has gradually eased lockdown measures, he believes that consumers will continue to buy directly from farmers, especially those raising organic crops.

“In the past, Malaysians could buy vegetables everywhere, but because of the MCO, they started buying online. That’s when they reached out to farmers and became more conscious of what and where they were buying,” Simon said.

Online shopping is now the norm in Southeast Asia, as governments throughout the region have enforced lockdown and social distancing measures to check the spread of infections.

However, these measures have disrupted the supply of food from farms to cities and towns, with public transportation suspended and trading outlets shuttered. This situation has prompted urban residents to seek alternatives.

One of the most popular options is to buy directly from farmers via e-commerce sites and social media. Meanwhile, others residents have started to grow their own vegetables at home.

EWS supplies seeds to wholesalers and distributors, but these outlets had to close in March amid the Philippine government’s curbs. Sayoc said the company then went online and started selling seeds directly to consumers.

By mid-September, it had sold more than 30,000 seed pouches. Sayoc said EWS will not quit the retail market anytime soon.

“Home gardening is not just a fad — it’s part of the new normal. The pandemic has heightened public awareness of the importance of growing safe and nutritious vegetables for home consumption,” she said.

“Urban gardening will continue to grow as governments recognize it as a potential alternative to diversify food sources,” Wong said.

He added that as city population densities rise, food security will become a pressing issue.

The Philippine Department of Agriculture has allocated 400 million pesos (US$8.26 million) to promote urban gardening. Agriculture Secretary William Dar said: “This is part of our household food security arsenal.”

The department is distributing starter kits to households and local governments to encourage them to grow their own vegetables. Each kit contains a packet of assorted vegetable seeds, an instruction brochure, and sample designs for pocket, container and community gardens.

Meanwhile, the Singapore Food Agency is leasing out the rooftops of public buildings for growing food crops. This program is in line with the city-state’s “30 by 30” goal, which aims to produce 30 percent of its food locally by 2030. 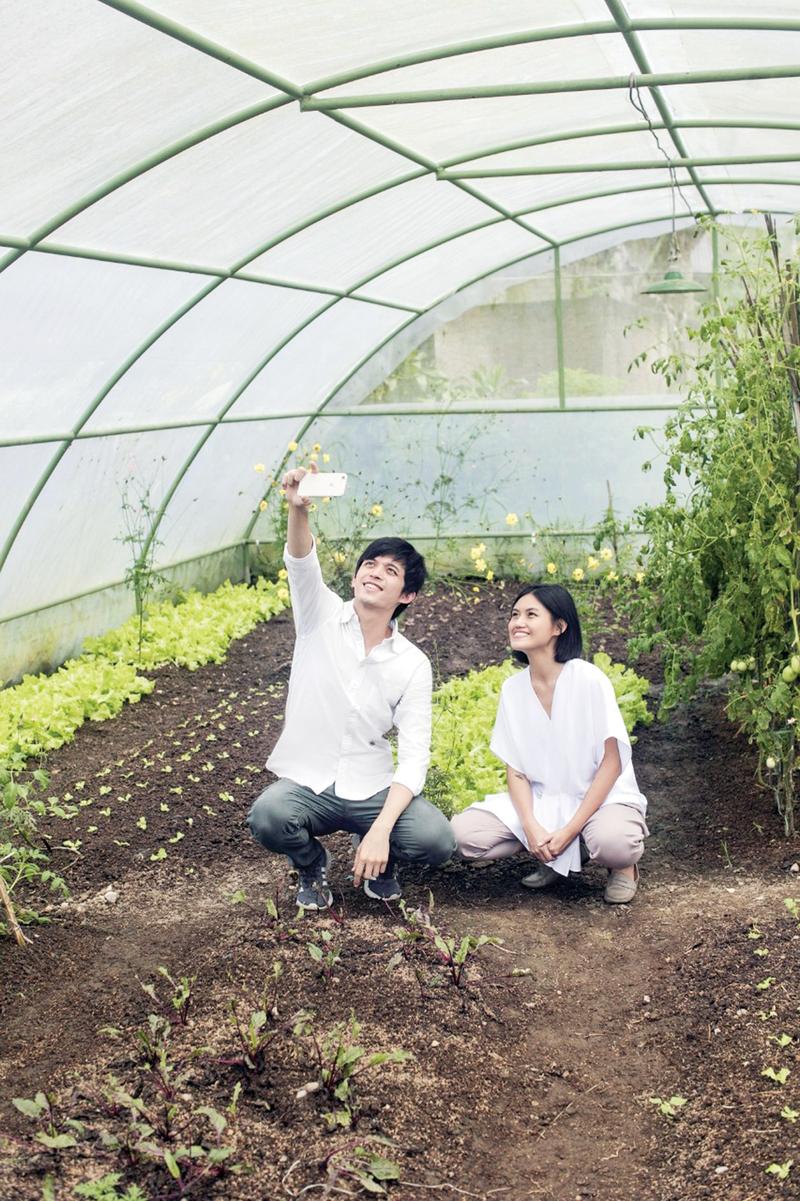 Helga Angelina Tjahjadi (right), co-founder of Burgreens, a vegetarian restaurant and caterer in Jakarta, the Indonesian capital, aims to serve food that is good for diners, the earth and farmers. (PHOTO PROVIDED TO CHINA DAILY)

Food and agriculture industry experts said the rise of urban gardening and buying directly from organic farmers are part of the farm-to-table social movement that has gained traction in the region in recent years.

It became popular in the early 2000s, when sustainable agriculture advocates promoted seasonal produce sourced directly from farms, which provides small farmers with more income and lessens their reliance on middlemen for sales. Consumers able to trace the source of their food are also assured of quality and safety.

Farm-to-table advocates also promote the welfare of small farmers, the importance of an ecologically sound farming system, and the cultivation of heirloom crops, or varieties commonly grown before World War II but not used in large-scale modern agriculture.

The rapid rise of Southeast Asia’s economy has failed to boost its agriculture sector. From 2000-15, while the region recorded annual GDP growth of more than 5 percent, the agriculture sector grew only 3 percent, according to the International Food Policy Research Institute. This has affected the livelihoods of some 100 million small farmers in the region, spurring the growth of the farm-to-table movement, according to the Berlin-based policy think tank Heinrich Boll Stiftung.

“Decreasing rice prices, extreme climate-related events such as typhoons, floods or droughts shifted rural households into widespread poverty, and organic farming was introduced as one means of relief. It can offer an alternative livelihood strategy for farmers in rural or urban areas, and provide mitigation for climate change-related impact,” the think tank said.

Asked about their commitment to the farm-to-table movement, restaurateurs stressed the welfare of small farmers and the environment.

Malaysian chef Darren Teoh, who owns the fine-dining restaurant Dewakan in Kuala Lumpur, the country’s capital, said the principles of the movement are aimed at promoting sustainable agriculture, of which he is an advocate. This not only involves buying organically grown produce, but offering fair prices to farmers and championing indigenous crops.

Dewakan is known for dishes crafted from indigenous and long-forgotten ingredients in Malaysia, including buah kulim, a fruit only found in the country’s rainforests, and bunga kantan, or torch ginger flower.

“We form connections with people who have similar values and principles and see if this translates to the work they do on the field,” Teoh said, adding that about 90 percent of the ingredients used at Dewakan are bought directly from Malaysian farmers and indigenous groups.

Helga Angelina Tjahjadi, co-founder of Burgreens, a vegetarian restaurant and caterer in Jakarta, the Indonesian capital, aims to serve food that is good for diners, the earth and farmers.

“When we talk about sustainability, there are three qualities that our company values. First, it has to be plant-based, because plants use fewer resources and have fewer greenhouse gas emissions. Second, we use mostly local ingredients. Third, we also make sure that farmers are getting a fair income,” she said.

As people become more affluent, they become increasingly concerned about their food consumption from health, environmental and social impact perspectives, he said.

“In Southeast Asia, many people are aware of the vulnerabilities of small farmers and are generally empathetic toward them.”

He also said technology start-ups in the region play a key role in making direct-from-farm purchases easier — from sourcing and packing produce to cross-regional transportation and delivery to urban consumers.

With lockdowns driving more customers online to buy directly from farmers, a new generation of tech-savvy agriculturists is turning to social media and e-commerce sites to promote and sell produce.

In Thailand, fruit farmers who traditionally sell their produce to wholesalers have started to market directly to consumers using Facebook and the messaging app LINE, according to a report by Thai Enquirer.

In Malaysia and Indonesia, farmers and fishermen are selling their produce on e-commerce sites, as lockdowns have affected their sales, according to a BBC report.

“I think the new normal for food purchases will follow the trend of new retail. People will prefer to buy things the way they want and where they want. This means that while traditional food supply chains won’t be disrupted completely, the direct farm-to-consumer model is here to stay and will take a significant market share,” he said.

Wong hopes more farmers will embrace digitalization as a “strong pathway to better rural livelihoods”, but said this will require support from other sectors, including governments, agribusiness companies and research institutions.

Teoh from Dewakan said consumers’ lifestyles will determine if the farm-to-consumer model remains relevant after the pandemic.

He is unsure if online customers will continue to buy produce after returning to work, as they will be spending much time commuting. However, Teoh believes that lockdowns have given more people the chance to learn about sustainable agriculture.

Tjahjadi from Burgreens said the pandemic could lead to a gradual behavioral change among Indonesians, adding that a growing number had already started to care about where their food comes from.

“There’s a healthy food trend in Indonesia,” she said, which has been heightened during lockdown.

Tjahjadi said some residents in Jakarta have started urban gardens after spending more time at home. She expects people to continue cultivating their gardens after the pandemic — a lifestyle that has emerged during months of lockdown.