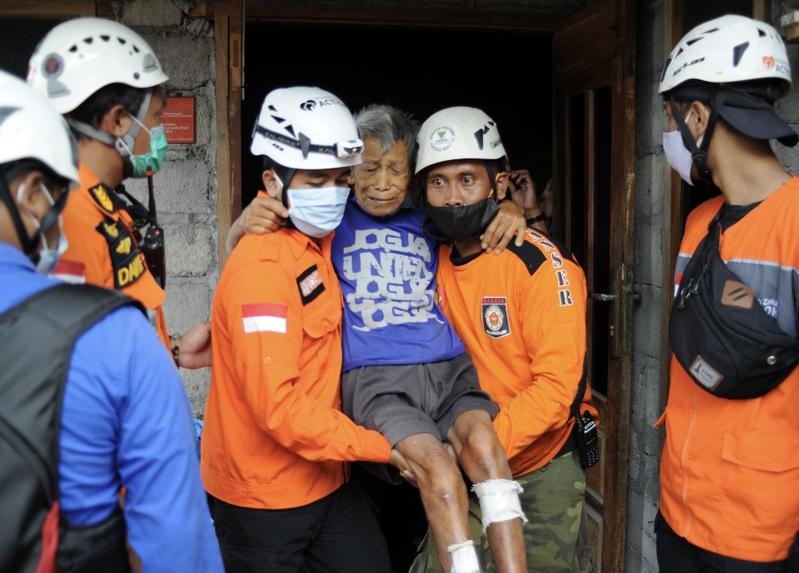 Rescue workers evacuate a resident in Magelang on November 8, 2020, as the Indonesia Geological agency raised the alert status for Mount Merapi ahead of a possible eruption. (AGUNG SUPRIYANTO / AFP)

JAKARTA - More than 630 residents were evacuated from a village near Mount Merapi in Indonesia's Central Java province between Friday and Saturday as a volcano alert was raised to the second-highest level, a local official said.

Chief Executive of Magelang District's disaster management agency, Edy Susanto, said on Saturday that in addition to them, there are also people living in three villages in Dukuh sub-district to be evacuated.

In Sleman district of Yogyakarta province, 133 vulnerable groups including children, the elderly, pregnant women, and the disabled have been evacuated

"There are about 2,625 people from the three villages who have to be evacuated. We are still monitoring the rest," Susanto said, adding that basic supplies for seven evacuation posts are available for the next three days.

In Sleman district of Yogyakarta province, 133 vulnerable groups including children, the elderly, pregnant women, and the disabled have been evacuated, said Joko Supriyanto, head of the district's disaster management agency.

The agency has turned three buildings into evacuation centers. The district has set an emergency response period for the possible eruption of Mount Merapi from Nov 5-30.

Merapi is the most active volcano in Indonesia. Last Thursday, the status of the 2,968-m high volcano was declared as the second-highest alert level, which means that its eruption can occur at any time.

The last eruption of Merapi occurred on June 21 this year.