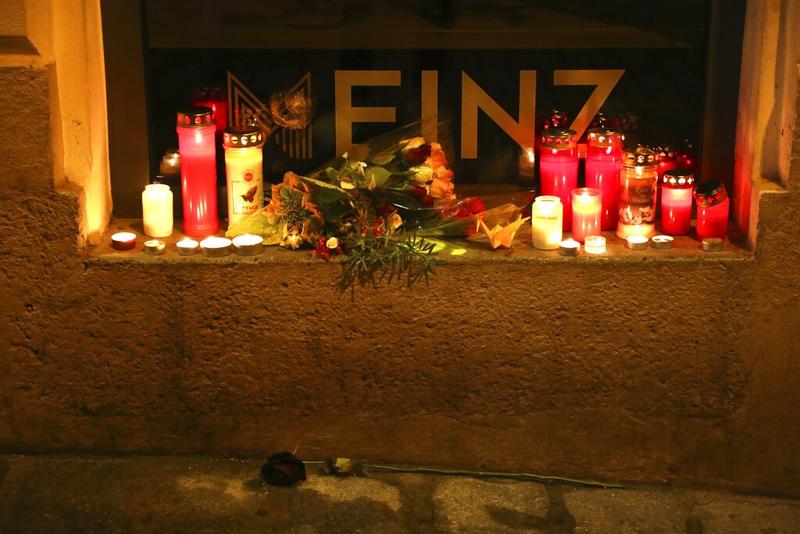 Candles and flowers where a bullet hole is seen at the synagogue crime scene, in Vienna, Austria, Nov 3, 2020. (MATTHIAS SCHRADER / AP)

CAIRO - Islamic State claimed responsibility on Tuesday for a deadly attack in Vienna, in a statement issued through its Amaq News Agency along with a picture and video purporting to show the gunman.

According to a statement, Islamic State said a gunman had attacked crowds in central Vienna on Monday with a pistol and machine gun before being shot dead by police

The picture, released on Telegram, showed a bearded man identified as "Abu Dagnah Al-Albany". According to the accompanying statement, he had attacked crowds in central Vienna on Monday with a pistol and machine gun before being shot dead by police.

In the photo, Albany carries a pistol, a machine gun and a machete and is wearing a ring stamped with a sentence saying "Mohammed is the messenger of Allah".

Amaq posted a video of Albany minutes later in which he pled allegiance to Islamic State leader Abu Ibrahim al-Hashemi al-Quraishi. He was speaking Arabic in the video.

Albany would normally be used to refer to someone with Albanian origins. The statement did not identify the man by any other name.

Austrian officials have identified the attacker as Kujtim Fejzulai, a dual citizen of Austria and North Macedonia, who had been sentenced to 22 months in jail in April 2019 for attempting to travel to Syria to join Islamic State.

The gunman, who was killed by police minutes after opening fire on crowded bars, had been released from jail less than a year ago.