​Millions vote in India's first election in shadow of coronavirus 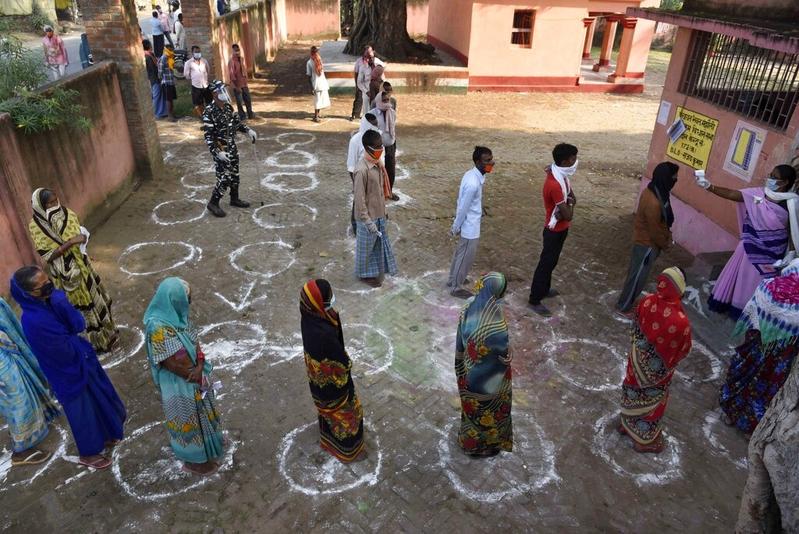 Voters stand within circles marked to ensure social distancing at a polling station during the first phase of state elections at Paliganj, in the eastern Indian state of Bihar, Oct 28, 2020. (AFTAB ALAM SIDDIQUI / AP)

LUCKNOW - Health authorities in one of India's most populous states faced a big test on Wednesday with the country's first state assembly election being held since the novel coronavirus epidemic began, despite calls to postpone it.

The world's biggest democracy has one of its worst outbreaks of the coronavirus, with nearly 8 million infections, and voters lining up on the first day of a three-phase election for a new legislature in Bihar state were met with masks and temperature checks.

Bihar is India's third-most populous state with a population of more than 100 million people. The election outcome is not expected to have any major implications for national politics

"Face masks and sanitizers have been provided to the staff deployed on election duty," said a polling officer in the holy city of Gaya, who declined to be identified as he was not authorized to speak to the media.

"Face masks are also being provided to people who are reaching polling stations without wearing one."

In August, the Supreme Court rejected a bid by a Bihar political party to postpone the vote, ruling that the virus was not a valid reason to do so. 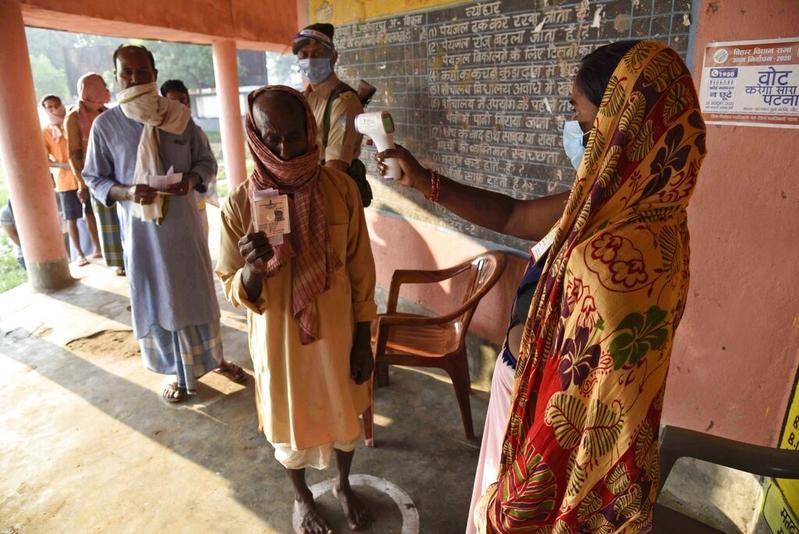 A woman wearing a face mask (right) screens the body temperature of voters at a polling station in Paliganj, in the eastern Indian state of Bihar, Oct 28, 2020. (AFTAB ALAM SIDDIQUI / AP)

Bihar is India's third-most populous state with a population of more than 100 million people. Voting takes place over three days, winding up on Nov 7.

The outcome is not expected to have any major implications for national politics more than a year after Prime Minister Narendra Modi secured a second term with a sweeping general election victory.

Modi, whose ruling alliance in Bihar is up against a united opposition, recently praised Bihar's handling of the coronavirus. Bihar has recorded more than 213,000 infections, fewer than many better-off Indian states with smaller populations.

India's daily increase in virus infections has been dipping since a September peak, but health experts warn that the numbers could surge again.

India is set to pass the milestone of 8 million infections on Thursday, as 43,893 new cases were reported in the past 24 hours, taking its caseload to 7.99 million, health ministry data showed.

India has the second-highest number of infections after the United States but its death toll has been relatively low at 120,010.