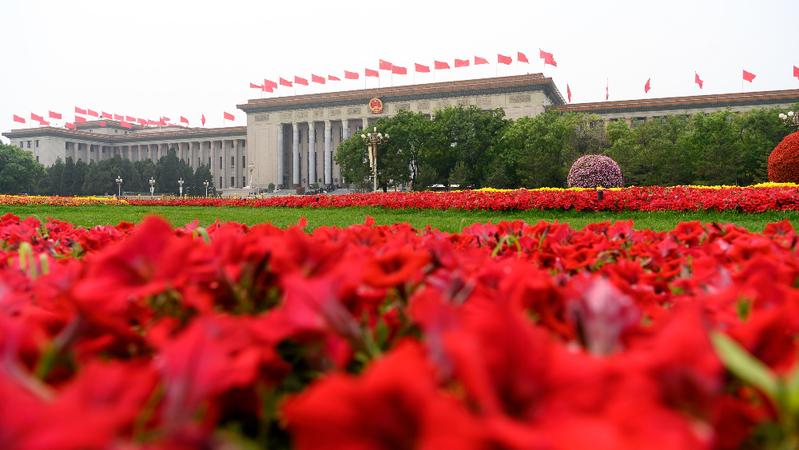 A view of the Great Hall of the People, the venue of the third plenary session of the 13th National Committee of the Chinese People's Political Consultative Conference, in Beijing, China, on May 21, 2020. (PHOTO / XINHUA)

When the Communist Party of China draws up the blueprint for the country's socioeconomic development for the next five years and beyond, people's concerns matter to its policymaking.

In drawing up the proposals for the 14th Five-Year Plan (2021-25), which are being discussed at the Fifth Plenary Session of the 19th CPC Central Committee, the Party has extensively sought public opinions to make the plan more relevant to the country's reality and the people's desire to live a better life. President Xi Jinping, who is also general secretary of the CPC Central Committee, was deeply involved in the process.

In the past months, Xi held a series of meetings and symposiums to obtain opinions and suggestions on the new five-year plan from economists, social experts, entrepreneurs, scientists, professionals outside the Party and grassroots representatives.

In drawing up the proposals for the 14th Five-Year Plan (2021-25), the Communist Party of China (CPC) has extensively sought public opinions to make the plan more relevant to the country's reality and the people's desire to live a better life

For the first time in history, a two-week campaign was launched in August to seek public input online for drafting the plan. It received over 1 million opinions and suggestions from internet users on a wide range of topics, including social governance, technological innovation, rule of law, the healthcare system, job creation, rural vitalization, educational reforms and environmental protection. Some of them have been delivered to him, according to Xi.

Observers said that such a policymaking process, which is carried out in the formulation of the nation's development blueprint, reflects the practice of socialist democracy with Chinese characteristics, which was described by Xi as "a type of whole-process democracy". That means all major legislative decisions in the country are based on legal procedures and democratic discussions as well as scientific and democratic decision-making, according to Xi.

In a written instruction in August, Xi required combining top-level design and public opinions in compiling the 14th Five-Year Plan, and stressed the need to broaden channels for the public to express their opinions and offer their suggestions.

The compilation of five-year plans involves all aspects of economic and social development and is closely related to people's work and life, so people from all sectors of society should be encouraged to offer advice by diverse means so that social expectations, the wisdom of the people, expert advice and experience at the grassroots level could be integrated into the plan, Xi said.

While presiding over a symposium attended by grassroots-level representatives in Changsha, Hunan province, last month, Xi stressed that "realizing people's aspirations to live a better life is the goal we strive for", and he encouraged the public to offer advice and suggestions on compiling the plan through various channels to ensure that it responds to the wishes of the people and meets their expectations.

At that meeting, 10 grassroots-level local representatives, including an agricultural cooperative manager, a truck driver, a restaurant owner, an entrepreneur and a schoolteacher, offered their suggestions on issues including rural education, poverty alleviation through industrial support and the development of micro and small businesses.

Li Junru, former vice-president of the Party School of the CPC Central Committee, said that formulating the proposals for the five-year-plans for economic and social development is an important way for the Party to govern the country.

In line with the country's development needs and people's aspirations for a better life, the CPC Central Committee makes proposals for the mid-and long-term socioeconomic development plan, and the State Council will organize related government departments to compile the plan based on the proposals, Li said, and the final plan will be presented to lawmakers for their approval when the annual session of the National People's Congress, China's top legislature, is held next year.

The Party leads the formulation work, and the government and the legislature play their due roles in the process, Li said, adding that such a practice is a good experience that the CPC has created in the governance of China.

Created every five years since 1953, the five-year plans are one of the major characteristics of China's governance system, setting growth targets and defining development policies. They are more like "a super policy package"－setting out quantitative indexes on many fields, including economic growth and environmental protection, and listing major programs and infrastructure projects affecting people's livelihoods. They also allow the authorities to map out strategies for overall economic and social development and advance with the times.

It takes at least two years for China to make a five-year plan as officials, policymakers and experts conduct a great deal of research, listen to suggestions from people from all walks of life, analyze the existing problems, learn from previous mistakes and hold wide-ranging discussions.

The 14th Five-Year Plan is believed to be the cornerstone of China's development in the coming years as the period between 2021 and 2025 marks the first five years on the country's journey toward building a modern socialist country by 2049.

The five-year plans can fully leverage the decisive role of the market in allocating resources, and can also help the government play a better role in economic development, experts said. Guided by the plans, China has created the miracle of long-term rapid economic growth while maintaining long-term social stability.

Gafar Karar Ahmed, Sudanese ambassador to China, said that the prosperity and stability of China cannot be achieved without some kind of agreement between the CPC and the Chinese people. "I have been in China for 25 years. I see clearly that the Chinese model of democracy and human rights is extremely fit for this nation. People who understand the history and culture of this nation will understand China's system works indeed."

The Sudanese diplomat said that the CPC has done all it can to improve people's livelihoods, healthcare, education and other aspects. "So in my point of view, this model is very successful, because whatever you do and wherever you are, you and I want stability, you and I want a better life, you and I want to see our children go to school safely."

Cypriot Ambassador to China Antonis Toumazis said that socialism with Chinese characteristics, the strong leadership of the CPC, the economic system it upholds and the mentality of the hardworking and disciplined Chinese people all contributed to China's development in the past decades.

"You cannot say this kind of democracy is better than others, you have to take into consideration the history and culture of a country where the democracy applies," Toumazis said, adding that the Chinese government and people will find the best road for the nation's development.