Australia's coronavirus epicenter to ease curbs after no new cases 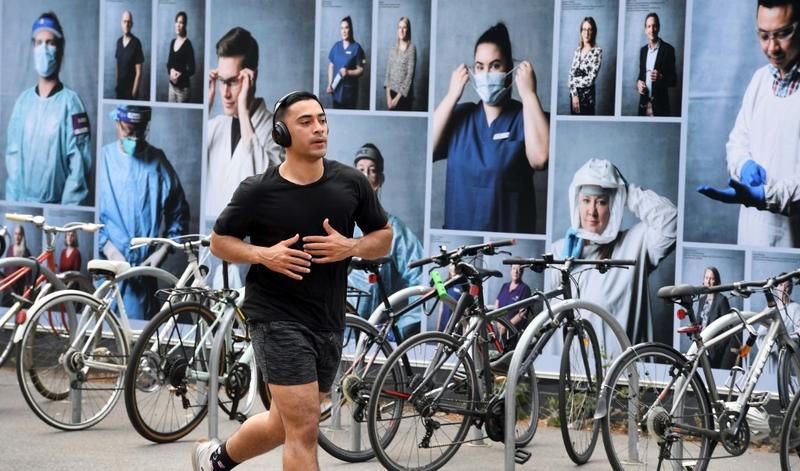 A man jogs past a display of photos outside the Royal Melbourne Hospital on Oct 20, 2020. (WILLIAM WEST / AFP)

Melbourne - home to 5 million people - has been in lockdown since early July after a spike of novel coronavirus infections that began in hotels where people were in quarantine after arriving from abroad.

But with infections now under control, Andrews said most restrictions would be eased in two phases from Tuesday, which should give Australia’s ailing economy a boost.

“Now is the time to open up,” Andrews told reporters in Melbourne.

“We’ve have been able to bring this under control, a day of zero cases is an amazing achievement.”

Andrews said people would be free to leave their homes from Tuesday while restaurants, cafes, shops, bars and hotels would be allowed to reopen.

Capacities at those businesses, however, will be capped at 40 indoors and 70 outside.

The size of religious services would also be expanded, Andrews said.

Andrews said people would be allowed to travel from Melbourne to the state’s rural areas from Nov 9, when a curb limiting people to no more than 25 km from their homes will be dropped.

The easing of restrictions will boost hopes of a quick economic rebound from Australia’s first recession in three decades, triggered after large swathes the economy were shut to slow the spread of the virus.

The economy shrank 7 percent in the three months to the end of June, the biggest quarterly contraction since records began in 1959. Unemployment hit a 22-year high of 7.5 percent in July as businesses and borders closed.

Most restrictions in other parts of Australia have been eased with just a handful of locally acquired infections being found on most days.

Australia has recorded just over 27,500 novel coronavirus infections, far fewer than many other developed countries.

Victoria, which accounts for more than 90 percent of the 905 deaths nationally, did not record any new deaths from the virus in the past 24 hours.

The Afghan Ministry of Public Health on Monday confirmed 104 new COVID-19 cases, bringing the total number of patients to 40,937 in the country, including 5,269 active cases.

A total of 431 tests were conducted within the past 24 hours, and 104 were positive in nine provinces out of 34 Afghan provinces, the ministry said in a statement.

Four patients died within the period, taking the death toll to 1,518 since February, the statement added.

Laboratories across Afghanistan have completed 120,425 tests since February.

The Bangladeshi government has adopted a "no mask, no service" policy across the country to contain the spread of the COVID-19 pandemic.

“Instructions have been given at all levels, to all of our institutions -- social, organizational or formal institutions -- that no mask, no service. Masks must be used in all institutions, markets, shopping malls, schools, and social and religious gatherings. We’ve made it compulsory,” Cabinet Secretary Khandker Anwarul Islam said.

He was briefing journalists after the weekly Cabinet meeting on Sunday.

Brunei reported no new cases of COVID-19 on Monday with the national tally of cases standing at 148.

According to Brunei's Ministry of Health, no more recoveries were recorded, maintaining the total number of recovered cases at 143. There are still two active cases being treated at the National Isolation Center, who were recorded on Oct 14 and 22.

Meanwhile, currently there are 287 individuals who are undergoing mandatory isolation at the monitoring centers provided by the government, who have arrived in the country after traveling abroad.

There have been three deaths from COVID-19 in Brunei.

The country, which has the second-highest number of infections after the US, has been averaging about 52,000 cases daily over the past week, after reaching almost 100,000 in September. The slowdown comes as the US is reporting higher infections, topping 80,000 for two straight days.

"I have tested COVID-19 positive. Asymptomatic. Feeling very much alright," Das, governor of the Reserve Bank of India (RBI), said on his social media account.

The governor will continue to work from isolation and said that his work at the RBI will go on normally. 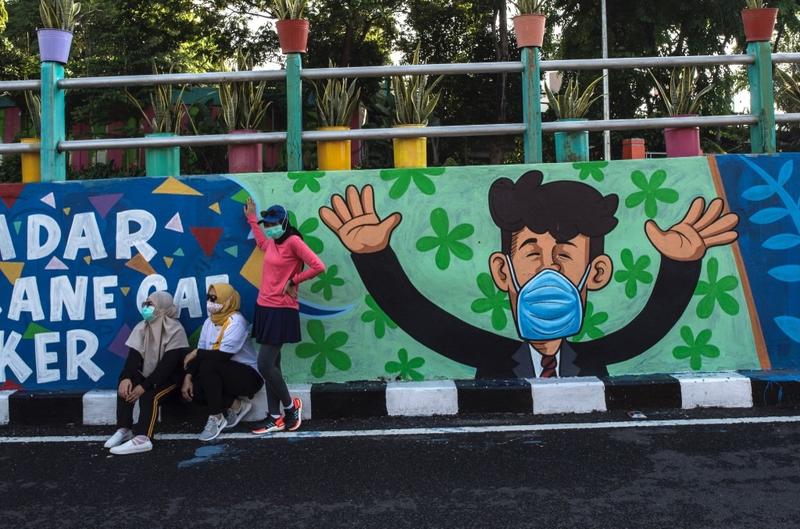 According to the ministry, 4,545 more people were discharged from hospitals, bringing the total number of recovered patients to 313,764.

The pandemic has so far claimed 32,616 lives in Iran, up by 296 in the past 24 hours, said Sima Sadat Lari, spokeswoman for the Iranian Ministry of Health and Medical Education, during her daily briefing.

A total of 455,054 people have recovered from the disease and been discharged from hospitals, while 4,969 remain in intensive care units, she added.

According to the spokeswoman, 4,719,597 tests for the virus have been carried out in Iran as of Sunday.

The new cases included 716 in the Iraqi capital Baghdad, 331 in Erbil, 322 in Duhok, and Sulaimaniyah 175, while the other cases were detected in the other provinces, the ministry said in a statement.

The ministry also reported 55 new deaths and 3,140 more recovered cases in the country, raising the death toll from the infectious virus to 10,623 and the total recoveries to 381,349.

A total of 2,756,365 tests have been carried out across the country since the outbreak of the disease in February, with 16,687 done during the day, according to the ministry.

Israel will begin human trials for a potential COVID-19 vaccine developed by a research institute overseen by the Defence Ministry on Nov 1 after receiving regulatory approval, the ministry said on Sunday.

The Israel Institute for Biological Research (IIBR) began animal trials for its “BriLife” vaccine in March. The Health Ministry and an oversight committee have now given the green light to take it to the next stage.

Eighty volunteers aged between 18 and 55 will be monitored for three weeks to see if virus antibodies develop, the ministry said in a statement. A second phase, expected to begin in December, will involve 960 people over the age of 18.

Should those succeed, a third, large-scale phase with 30,000 volunteers is scheduled for April/May. If successful, the vaccine may then be approved for mass use.

The vaccine, the ministry said, has already tested well on a number of animal models and the IIBR has produced more than 25,000 doses for the first and second phases of the clinical trials.

The number of confirmed COVID-19 cases in the Maldives has risen to 11,505, local media reported Monday.

According to the Health Protection Agency (HPA), 84 new cases of COVID-19 were detected on Sunday, including 26 locals and 58 foreigners. 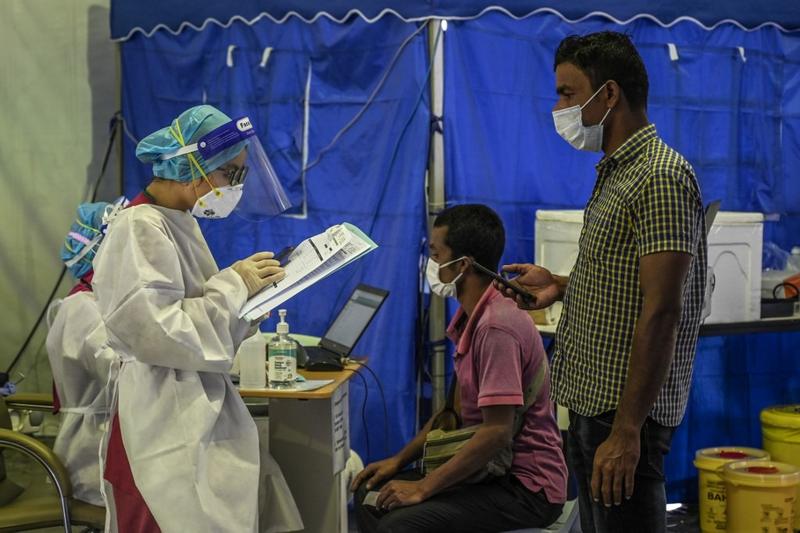 A health worker inspects details before collecting swab samples to test for the COVID-19 novel coronavirus at Sunway Medical Center in Subang Jaya, on the outskirts of Kuala Lumpur, on Oct 22, 2020. (MOHD RASFAN / AFP)

Another eight new deaths have been reported, bringing the death toll to 229.

The majority of new cases are from the state of Sabah, with 533 of the new cases reported in the state.

Myanmar reported 986 more COVID-19 cases on Sunday, bringing the total in the country to 44,774, according to a release from the Ministry of Health and Sports.

A total of 29 more COVID-19 deaths were also reported in the country on Sunday, bringing the death toll to 1,095, the release said.

According to the ministry's figures, 24,920 patients have been discharged from hospitals so far.

With one other case now recovered, the country's total number of active cases is 74, according to the Ministry of Health.

The five cases include three additional international mariners in the Sudima Hotel Christchurch Airport, which brings the total number of mariners who have tested positive to 29, said a ministry statement.

New Zealand's total number of confirmed cases is now 1,584, according to the ministry.

Singapore is holding its first large-scale business conference this week since the coronavirus pandemic, a key test of efforts to restart the the city-state’s economy.

Singapore International Energy Week began Monday with 250 participants and on-site staff, with hundreds more slated to join virtually. As a hub for the oil and natural gas business, and a go-to destination for regional conferences, the Southeast Asian nation in a normal year hosts dozens of events for company officials to mingle and broker deals.

While places such as China and Chinese Taipei have restarted business gatherings -- from automotive shows to tech conferences -- with hundreds of participants, the Singapore event will be its first step in reopening a key sector. Those attending the conference at the Marina Bay Sands hotel are required to take a COVID-19 test, with results within 30 minutes, and must download a contact-tracing app.

“This has been in the making for a long while,” Trade and Industry Minister Chan Chun Sing said in his opening remarks, which highlighted efforts to boost Singapore’s green energy sector. “We are back in business. Different format, but same spirit.”

Singapore’s government has rolled out strict measures to stop the spread of the virus, such as implementing a partial lock-down for two months, requiring mask use and limiting outdoor gatherings to five people. The economy has gradually reopened since mid-June, with daily cases dwindling in recent weeks to low single digits or zero.

South Korea’s Celltrion Inc said on Monday it has received emergency use authorisation (EUA) from the US Food & Drug Administration (FDA) for its rapid COVID-19 testing kit Sampinute, which boosted shares of the company and its affiliates.

Celltrion said Sampinute delivers coronavirus test results within 10 minutes, with a sensitivity of around 94 percent.

The authorisation came three months after requesting approval in late July and the product has already been launched in the United States in August, according to the company statement.

“(The company) is planning to supply Sampinute across the United States through local wholesalers as it believes the demand for rapid diagnosis kits will be high, mainly among large businesses and government agencies that are about to return to work after telecommuting,” it said in a statement.

Shares of Celltrion Inc surged as much as 4.6 percent, while Celltrion Pharm and Celltrion Healthcare jumped 4.6 percent and 1.6 percent, respectively. Broader KOSPI, however, was trading down 0.1 percent as of 0208 GMT.

The total number of COVID-19 cases in Sri Lanka rose to 7,872 on Sunday after 351 new patients were detected during the day, mainly from a new cluster detected from a fish market in Peliyagoda in capital Colombo earlier last week, Health Ministry statistics showed.

According to the government information department, the Peliyagoda fish market cluster has emerged as a new large cluster in the island country leading to several parts of capital Colombo coming under a curfew in recent days to prevent a further spread of the infection.

Earlier Sunday, the police announced that a curfew which was already imposed on some parts of Colombo's north would be extended to Borella, Pettah, and Fort, which is the main business and trading hub of the capital. All businesses and key departments in the curfew area would be closed until further notice and people were informed not to leave their homes.

The Department of Health (DOH) of the Philippines on Monday reported 1,607 new confirmed cases of COVID-19, bringing the total number of the cases in the country to 371,630.

The DOH said 245 more patients had recovered, raising the total number of recoveries to 328,258. The death toll climbed to 7,039 after 62 more patients died, the DOH said.

Health Undersecretary Maria Rosario Vergeire told an online media briefing that as of Oct 25, the DOH has monitored a total of 2,531 COVID-19 clusters across the country. 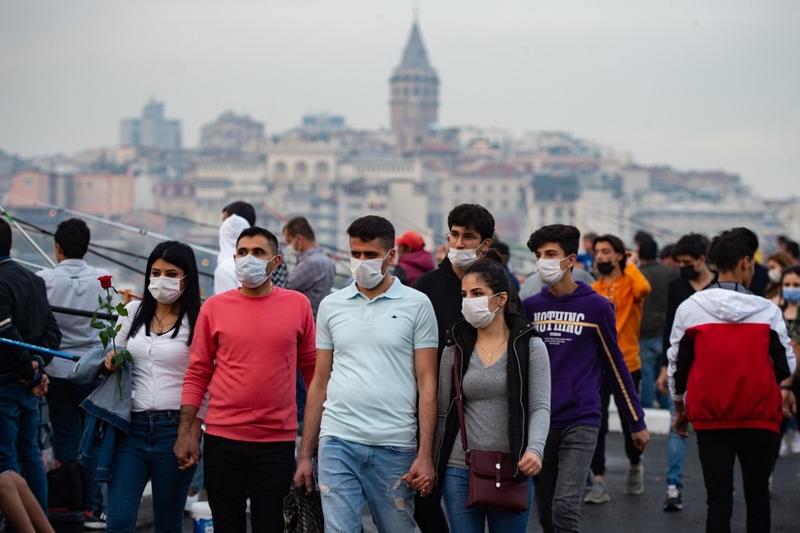 Meanwhile, 72 people died in the past 24 hours, taking the death toll to 9,799, the Turkish Health Ministry announced.

Vietnam reported eight new cases of COVID-19 infection on Sunday, bringing its total confirmed cases to 1,168 with 35 deaths from the disease so far, according to its Ministry of Health.

The new cases, including two one-year-old boys, are all Vietnamese citizens who have recently entered the country from abroad and were quarantined upon arrival, said the ministry.