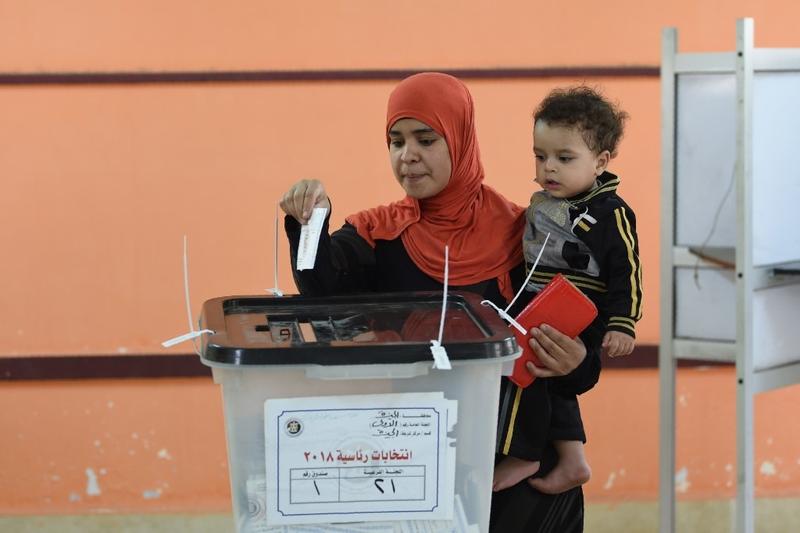 An Egyptian woman casts her ballot at a polling station in Saad Zaghloul Basha school in Giza, on the third day of voting in the 2018 presidential elections on March 28, 2018.（FETHI BELAID / AFP)

CAIRO - Polls opened in Egypt on Saturday for parliamentary elections that will stretch over several weeks and are set to be dominated by supporters of President Abdel Fattah al-Sisi.

A first round of voting will end on Sunday, with a second round on Nov 7-8. Run-offs will take place in late November and early December.

A first round of voting will end on Sunday, with a second round on Nov 7-8. Run-offs will take place in late November and early December

The polls are being held under a new electoral law under which 50 percent of 568 contested seats will be allocated to pre-selected lists, a system critics say benefits Sisi’s backers.

The remaining contested seats will be allocated to individual candidates, and Sisi can appoint up to 28 legislators directly.

Mostaqbal Watn (Nation’s Future), which in August won nearly three-quarters of the contested seats in an election for Egypt’s Senate, an advisory body, is the favorite to come out top.

Sisi has overseen a sweeping crackdown on political dissent since leading the ouster in 2013 of the Muslim Brotherhood’s Mohamed Mursi, who was freely elected in 2012 before mass protests engulfed his rule.

Both Islamists and liberal opponents have been targeted.

Supporters say the measures have been necessary to stabilise the country and carry out economic reforms that have won praise from many economists and international financial institutions.

As Sisi has consolidated control, interest in politics has dropped, with electoral turnout gradually declining.