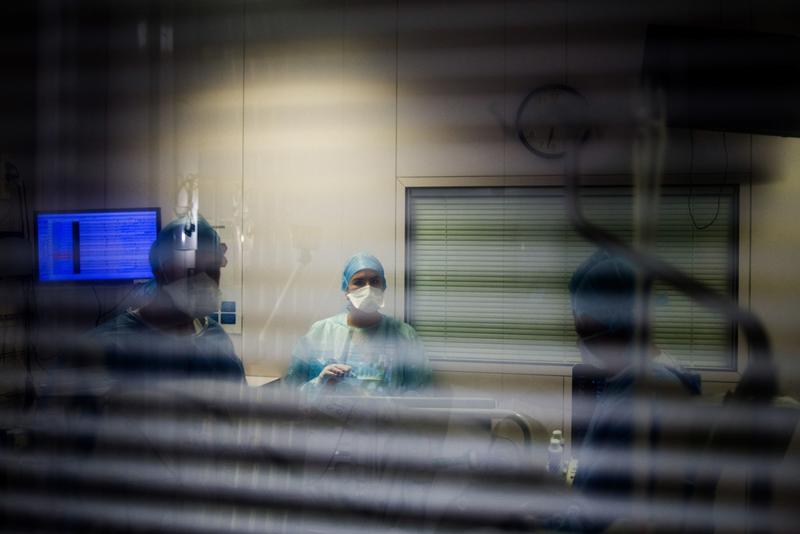 Nurses and doctors provide treatment for a COVID-19 patient in the intensive care unit (ICU) at the Ambroise Pare Clinic in Paris, France, on Oct 22, 2020. (PHOTO / BLOOMBERG)

“The president yesterday was tested for the presence of coronavirus. The result turned out to be positive. The president is fine. We are in constant contact with the relevant medical services,” Spychalski said on Twitter.

Duda’s infection comes as the country faces a surge in the COVID-19 epidemic, with new infections hitting a daily record of more than 13,600 on Friday.

Duda, 48, holds a mainly ceremonial role, but has the power to veto legislation. He is an ally of the ruling nationalist Law and Justice (PiS) party.

Poland registered 13,628 new coronavirus cases on Saturday, slightly less than Friday’s record. The number of deaths was 179, the highest since the beginning of the pandemic, and almost 479,000 people are now in quarantine in the country.

The world is now at a critical juncture in the COVID-19 pandemic and some countries are on a dangerous path, facing the prospect of health services collapsing under the strain, the head of the World Health Organization said on Friday.

“We are at a critical juncture in the COVID-19 pandemic, particularly in the Northern hemisphere,” WHO Director-General Tedros Adhanom Ghebreyesus told a news conference. “The next few months are going to be very tough and some countries are on a dangerous track.”

“We urge leaders to take immediate action, to prevent further unnecessary deaths, essential health services from collapsing and schools shutting again. As I said it in February and I’m repeating it today: This is not a drill.”

Tedros said too many countries were now seeing an exponential increase in infections, “and that is now leading to hospitals and intensive care units running close or above capacity -- and we’re still only in October”.

AstraZeneca has resumed the US trial of its experimental COVID-19 vaccine after approval by regulators, and Johnson & JohnsonS is preparing to resume its trial on Monday or Tuesday, the companies said on Friday.

The news signaled progress against the novel coronavirus that has infected more than 41 million globally, including 8 million Americans and comes 10 days before a US presidential election that may hinge on plans here to fight the pandemic.

AstraZeneca, one of the leading vaccine developers, paused its US trial on Sept 6 after a report of a serious neurological illness, believed to be transverse myelitis, in a participant in the company’s UK trial. J&J paused its large, late-stage trial last week after a study participant became ill.

Both companies have contracts to provide vaccine to the United States and other governments if they are cleared by regulators.

Following Spain, France on Friday became the second country in Europe to pass the grim one-million mark, after new COVID-19 infections surged by over 40,000 for the second day in a row, health authorities reported.

Italian Prime Minister Giuseppe Conte on Friday said all steps should be taken to avert a second national lockdown, as a recent spike in new coronavirus cases boosted fears across the country.

"I share the growing concern about the rise in infections these days throughout Europe and in Italy," Conte said in a video speech delivered at Work Festival 2020, an event organized by the National Council of Labor Consultants.

The prime minister's remarks came as the country registered 19,143 new cases over the last 24 hours, a new record high.

Another 20,530 people in Britain have tested positive for COVID-19, bringing the total number of coronavirus cases in the country to 830,998, according to official figures released Friday.

The coronavirus-related deaths in Britain rose by 224 to 44,571, the data showed.

The latest figures were announced as Warrington, a town in northern England, is expected to move into England's highest level of restrictions.

Non-essential shops, pubs and restaurants in Wales have closed doors as the British region entered a "firebreak" lockdown on Friday for 17 days.

The Czech Republic reported 15,252 new cases of coronavirus for Oct. 23, its highest daily tally, as the country faces Europe’s fastest spread of the infection.

Denmark will limit public gatherings to 10 people -- from 50 -- and expand the mandatory use of face masks after registering its highest ever daily tally of coronavirus cases.

The new measures, some of which will take effect from Monday, are the toughest since Denmark enforced one of Europe’s swiftest lockdowns back in March. A spike in new cases has spread across the Nordic region, where strategies to fight the pandemic have varied from country to country.

Luxembourg also introduced a curfew to cope with a record rise in infections. People are expected to stay at home between 11 pm and 6 am for one month as soon as lawmakers approve the new restrictions. “This was not an easy decision,” Prime Minister Xavier Bettel said.

Belgium’s French-speaking southern region of Wallonia widened the existing national curfew that begins at midnight, ordering residents to stay inside from 10 pm to 6 am for one month, after Brussels and the five Walloon provinces have 14-day incidence rates that are twice as high as those of the Flemish provinces in the north of the country.

In Switzerland, Geneva plans to limit public and private gatherings to five people to slow the spread of the virus. The new measures come into effect at midnight Sunday and will be in place until Nov. 30.

Chancellor Angela Merkel on Saturday reinforced a message to Germans to curb social contacts and keep travel to a minimum as coronavirus infections continued to rise.

Russia registered 16,521 COVID-19 cases over the past 24 hours, slightly down from the record high of 17,340 a day earlier, the country's COVID-19 response center said Saturday.

US
The United States broke its daily record for new coronavirus infections on Friday as it reported over 80,000 new cases due to outbreaks in virtually every part of the country, according to data compiled by Bloomberg.

The US death toll from COVID-19 could surpass 500,000 by February unless nearly all Americans wear face masks, researchers said on Friday, as 14 states set new records for one-day increases in infections.

The latest estimate by the widely cited University of Washington’s Institute for Health Metrics and Evaluation reflects fears that cold winter weather will drive Americans indoors, where the virus is more likely to spread.

The number of possible deaths could drop by 130,000 if 95% of Americans would cover their faces, the IHME said, echoing a recommendation by Anthony Fauci, director of the National Institute of Allergy and Infectious Diseases.

Anthony Fauci, director of the National Institute of Allergy and Infectious Diseases, told CNN he’s worried the US is headed for a massive surge in cases if smart public health measures aren’t ratcheted up. He also said he’s hopeful at least two vaccines will emerge by the end of November or early December that are “safe and effective.”

Earlier in the day, the top infectious disease expert told MSNBC that Friday’s data puts the US in a “a precarious place” as the cases would lead to an increase in hospitalizations and eventually deaths as the colder weather keeps people indoors.

The additional fund included up to 173 million Canadian dollars for the Quebec biopharmaceutical Medicago Inc., including support to create a production facility in Quebec City.

Mexico raised its alert in several states -- including the border state of Chihuahua -- amid a resurgence of COVID -19 cases. The northern states of Durango, Coahuila and Nuevo Leon are also at risk of moving to the highest risk level, Health Ministry official Ricardo Cortes Alcala said.

According to the Ministry of Health, the country registered 52 deaths from the virus in the same period, bringing the death toll to 13,844.

The southern region of Magallanes continues to report the highest number of new cases in the country, but has seen a decrease in the incidence rate.

Chile remains under a state of emergency and a curfew though quarantines have been lifted in many municipalities. In other areas, however, residents still have to follow social distancing measures due to the resurgence of cases.

Colombian Vice President Marta Lucia Ramirez said on Friday that she had tested positive for the novel coronavirus (COVID-19) and would be isolated in her home for 15 days.

"Yesterday I took the COVID-19 test, since I had planned to travel to the Governors Summit in (the city of) Manizales. I am informing Colombians that the result was positive. Thank God I am in good health and I am complying with the corresponding isolation," the vice president wrote on Twitter.

Argentina decided to prolong its isolation and social distancing measures meant to control the spread of the novel coronavirus until Nov 8, President Alberto Fernandez announced on Friday.

"From the day the (current) quarantine expires, we will continue the measure for another 14 days," said the president during a visit to the province of Misiones.

Argentina became the fifth country in the world and the second in Latin America to hit 1 million cases of COVID-19 earlier this week. "The virus has spread beyond the cities. It is also in small towns, and it is logical that this happens when people continue to travel," Fernandez said.

Argentina registered its first COVID-19 case on March 3 and went into quarantine two weeks later. As of Friday, the country has reported 1,069,368 cases and 28,338 deaths from the virus.

Brazil's COVID-19 death toll has reached 156,471 after 571 more patients died of the disease in the last 24 hours, the country's Ministry of Health said Friday.

Meanwhile, 30,026 more infections were reported, raising the nationwide count to 5,353,656, the ministry said.

The state of Sao Paulo, the most populous in the country, has been hit the worst by the disease, with 1,083,641 cases and 38,608 deaths, according to the ministry.

Tunisian Health Ministry announced that 1,322 new cases of coronavirus were confirmed, raising the tally of infections to 47,214 in the North African country.

The death toll from the virus rose by 44 to 784, the ministry said in a statement.

"The ministry recorded 1,058 hospitalized COVID-19 patients, including 163 in intensive care units and 98 others are mechanically ventilated," it added.