Iran blacklists US ambassador in Iraq, reciprocating US move 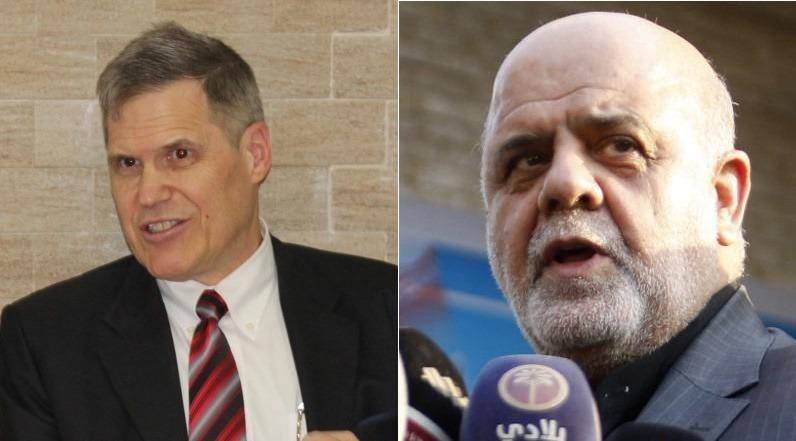 DUBAI/WASHINGTON - Iran on Friday blacklisted the US ambassador in Iraq and two other diplomats following a similar move by the United States against Iran’s envoy to Baghdad, the Iranian Foreign Ministry said.

“US Amb(assador) to Iraq, Matthew Tueller, has had a central role in coordinating terrorist acts in Iraq & beyond, in ... assassination of Gen. (Qassem) Soleimani... Today, Iran designated him & two other officials involved,” ministry spokesman Saeed Khatibzadeh said on Twitter.

The United States on Thursday imposed fresh sanctions against a senior Iranian official in Iraq for his role in supporting militia groups, and five entities over "attempted election interference."

Iraj Masjedi, a general in Iran's Islamic Revolutionary Guard Corps-Qods Force (IRGC-QF) and Iran's ambassador to Iraq, was designated for "acting for or on behalf of the IRGC-QF," according to a statement issued by the Treasury Department.

Iran's Foreign Ministry spokesperson Saeed Khatibzadeh rejected such a claim, which he described as "repetitive claims and fabricated, clumsy and fraudulent reports by US regime officials."

"The Iranian regime threatens Iraq's security and sovereignty by appointing IRGC-QF officials as ambassadors in the region to carry out their destabilizing foreign agenda," Treasury Secretary Steven Mnuchin said in the statement.

The United States claimed that Iran-backed militias were "the single biggest deterrent" to stability in Iraq. The Baghdad airport and the military bases housing US troops across Iraq as well as the US embassy in the Green Zone have been frequently targeted by mortar and rocket attacks.

In a separate move on the same day, the Treasury blacklisted the Islamic Revolutionary Guard Corps (IRGC), the IRGC-Qods Force, Bayan Rasaneh Gostar Institute, the Iranian Islamic Radio and Television Union, and International Union of Virtual Media for "attempting to influence elections in the United States."

ALSO READ: US to slap sanctions on over two dozen targets tied to Iran arms

The sanctions came one day after US Director of National Intelligence John Ratcliffe accused Iran and Russia of seeking to influence certain US voters in the run-up to the Nov 3 presidential election.

Iran's Foreign Ministry spokesperson Saeed Khatibzadeh rejected such a claim, which he described as "repetitive claims and fabricated, clumsy and fraudulent reports by US regime officials."