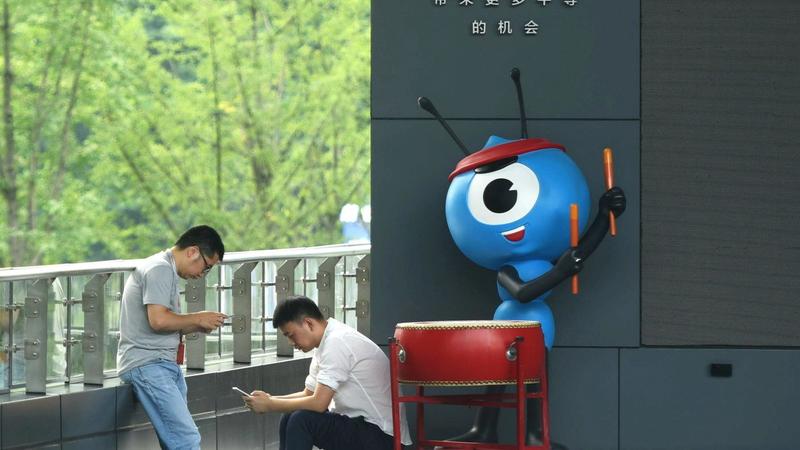 This undated photo shows a mascot of Ant Group at the company's headquarters in Hangzhou, Zhejiang province. (LONG WEI / FOR CHINA DAILY)

Alibaba Group Holding Ltd. has agreed to subscribe to more than a fifth of Ant Group’s imminent initial public offering, propping up its part-owned fintech giant’s potentially US$35 billion debut.

Asia’s largest corporation will buy 730 million of about 1.67 billion Shanghai-listed A shares as part of a placement to strategic investors, the e-commerce giant said in a stock exchange filing. Including the Hong Kong tranche of its IPO, Ant intends to sell a total of 3.3 billion shares. In addition, the financial services giant plans to issue about 1.16 billion Hong Kong-listed or H shares to Alibaba, part of a distribution of about 3.26 billion shares to existing backers.

Alibaba Group Holding Ltd said in a stock exchange filing that it will buy 730 million of about 1.67 billion Shanghai-listed A shares of Ant Group as part of a placement to strategic investors

The IPO would also be the first simultaneous listing in Hong Kong and on the year-old STAR Market in Shanghai.

Alibaba co-founder Jack Ma’s Ant Group is racing toward what could be the world’s largest ever coming-out party, slated for sometime over the coming weeks. The IPO shares deal helps Alibaba prevent the dilution of its stake after Ant goes public. The Chinese e-commerce giant will hold about 32 percent of its affiliate’s shares after the IPO, based on data compiled by Bloomberg.

Ant’s IPO is said to have drawn interest from strategic investors including Singapore’s sovereign wealth fund GIC Pte, Temasek Holdings Pte and China’s US$318 billion National Council for Social Security Fund. That strong demand means the Alipay operator could fetch a valuation of at least US$280 billion, despite concern that people within the Trump administration are exploring restrictions on the Chinese fintech giant, according to people familiar with the matter.

Ant reported a 74 percent jump in gross profit to 69.5 billion yuan (US$10.4 billion) from January to September, according to an A-share prospectus posted to the Shanghai exchange.

Ant is set to conduct price consultations for the Shanghai offering on Oct 23 and will set the price on Oct 26 as per its updated prospectus filed with the local exchange.

Strategic investors whose investments in Ant’s STAR IPO will be locked up for at least 12 months, will account for 80 percent of the domestic float. Among them are Zhejiang Tmall Technology, a wholly-owned unit of Alibaba, which has committed to purchasing 730 million shares, according to the prospectus.

The share sale plan comes after the China Securities Regulatory Commission accepted the registration of Ant’s domestic float on the Nasdaq-style STAR Market, as part of the local rules. The company filed its preliminary prospectus in late August.

Proceeds will be used partly to support Ant’s digital economy business and to enhance its research and development capabilities.

Hangzhou-based Ant on Monday also won approval from the Hong Kong Stock Exchange for the offshore leg of its IPO, Reuters has reported.