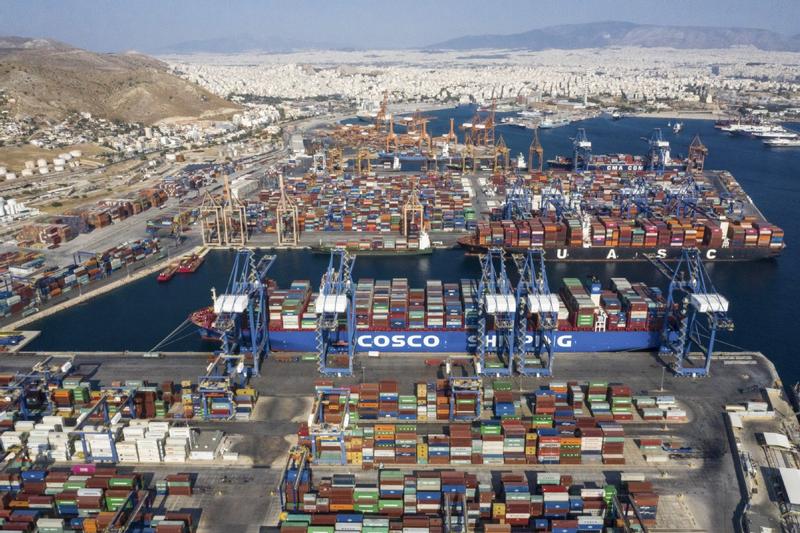 This aerial file photo on Sept 6, 2019 shows a cargo ship of COSCO Shipping Lines transporting Italian products to participate in the 2019 China International Import Expo (CIIE) berths at the Port of Piraeus in Greece. (PHOTO / XINHUA)

Although the growth of China's foreign trade is facing severe challenges caused by factors like the COVID-19 impact and the world's weak goods demand, the basic advantages and conditions for the development of this sector have not changed.

China still seeks to foster a stable global environment in order to boost foreign trade volume. The country can enhance its earning strength by promoting traditional industries that have been advantageous via international cooperation in production capacity. It can also seek more growth points in other developed countries

In particular, with the continuous implementation of a series of policy measures to stabilize foreign trade from the central authority to the local government level, as well as the surging stability and competitiveness of the country's industrial chain, its foreign trade has notably stopped falling from the pandemic impact and gradually rebounded.

Based on the current condition, it will likely speed up the high-quality development while maintaining a stable momentum, and could become the core force driving the recovery of international trade.

Since the 2008 Global Financial Crisis, the trends of unilateralism, trade protectionism and anti-globalization have risen. They have continued to manifest in new forms after the outbreak of the COVID-19 pandemic.

Therefore, the process of economic globalization has encountered severe challenges. Facing the global spread of the pandemic and the economic difficulties caused by it, the remedial global joint action has been delayed.

Some countries such as the United States have increased their internal conservative tendency, and nationalist-oriented national policy practices have been continuously strengthened. This has eroded international cooperation, and affected the willingness of key countries to lay a strong foundation for global governance.

For example, the reform of the World Trade Organization is in a complex and difficult state, and it is difficult for countries to reach consensus on reform plans.

Nevertheless, people should see there is broad consensus among most countries that globalization should be persisted with. The general trend of open international cooperation has not changed.

China still seeks to foster a stable global environment in order to boost foreign trade volume. The country can enhance its earning strength by promoting traditional industries that have been advantageous via international cooperation in production capacity. It can also seek more growth points in other developed countries.

It is vital for China to actively explore markets in partner economies related to the Belt and Road Initiative to reach win-win results, especially in economies of the Association of Southeast Asian Nations, Africa, Central and Eastern European countries, because global openness and cooperation are still the general trend, and the structure of China's foreign trade market has also shown a more diversified and optimized pattern.

The country's trade with the European Union, its second-largest trading partner, grew by 1.4 percent on a yearly basis to 2.81 trillion yuan during the same period, according to the latest foreign trade data released by the Ministry of Commerce.

Currently, the world economy has fallen into the biggest recession since World War II. According to the Global Economic Outlook report released by the World Bank in June, this year will see the largest number of economies suffer a decline in per capita output since 1870

Currently, the world economy has fallen into the biggest recession since World War II. According to the Global Economic Outlook report released by the World Bank in June, this year will see the largest number of economies suffer a decline in per capita output since 1870.

The International Monetary Fund, the World Bank and the Organization for Economic Cooperation and Development have all made predictions for a deep recession in the global economy.

The IMF forecast global economic growth will likely shrink by 4.9 percent this year. The WB forecast a decline of 5.2 percent. The OECD forecast a 6 percent drop.

It is more serious compared with the situation that occurred between 2008 and 2009 during the GFC. With the continued downturn of the world economy, global trade has also shrunk severely.

According to a WTO forecast, global trade will shrink by 13 percent this year. Basically, all regions of the world will see a double-digit decline in trade volume, and uncertainty shrouds the hoped-for recovery of global trade in 2021.

Moreover, the global circulation is still not smooth. Although the total number of global flights is gradually recovering, it is still 40 percent lower than the period early this year. Container ship port calls are still sluggish. As of early August, they were still down by about 7 percent from the same period last year.

Despite the global economic and trade situation being sluggish, the fundamentals supporting China's foreign trade development have not only remained unchanged but gradually strengthened in certain aspects.

First, China's institutional advantage has become more obvious. Against the backdrop of the worrisome prospects for global trade and investment, China was able to quickly adopt a series of measures to stabilize foreign trade across the country, focusing on key points and making up for shortcomings. These practical moves demonstrate the nation's comparative institutional advantage.

According to data from the General Administration of Customs, China's exports surged by 11.6 percent year-on-year in August, the fifth consecutive month of positive growth this year, a sign of the welcome improvement in the state of both Chinese and global economies.

China's foreign trade volume totaled 20.05 trillion yuan from January to August. Although it was still down 0.6 percent year-on-year, the drop had narrowed by 1.1 percentage points compared with the decline from January to July, indicating the overall trade situation has taken a turn for the better.

Second, the strong market advantage in China is more prominent. China has a population of 1.4 billion, the per capita GDP has reached US$10,000, and the gap of the consumption rate between China and the world average level is more than 15 percent, and its middle-income group continues to grow.

Third, the advantages of high-level opening-up will continue to emerge. With the spread of the global pandemic, China continues to adhere to the basic national policy of opening to the outside world, providing a solid guarantee for the development of foreign trade.

For example, the government continues to promote the implementation works after the WTO's Trade Facilitation Agreement took effect in 2017, guide enterprises to apply for paperless import and export documents, further improve the efficiency of Customs clearance, and provide more convenience during the inspection and quarantine procedures. This ensures that the goods of foreign trade businesses can enter the global market more conveniently.

However, there are some barriers as China's industrial chain has faced the pressure of relocation in recent years. Because several developed nations are trying to cut dependence on China's supply chain and encouraging their companies to return to their home markets, many manufacturing businesses in China have been affected.

Even though China's labor cost advantage provided basic conditions for multinational companies to deploy processing trade in the country's early stage of reform and opening-up, its soaring labor and other operational costs have forced a number of foreign manufacturing businesses to relocate their factories to other parts of the world in recent years, especially labor-intensive industries like clothing and footwear.

Although the current labor-intensive industries are gradually shifting from China to Southeast Asia and other countries, they are still highly dependent on Chinese intermediate products and equipment－and most of the industrial chain is still in China.

At the same time, although the US and others have tried hard to promote the return of the industry, foreign companies have gradually increased their confidence in investing in China.

Under such circumstances, the growth of China's foreign trade has become a highlight under the current global economic and trade downturn.

As the basic advantages of the sector's growth continue to fortify, it is foreseeable that while the scale of foreign trade in the fourth quarter and even the whole year will achieve recovery in growth, the global market channels and structure of China's products will be further enriched and upgraded.

The writer is president of the Chinese Academy of International Trade and Economic Cooperation, which is part of the Ministry of Commerce.