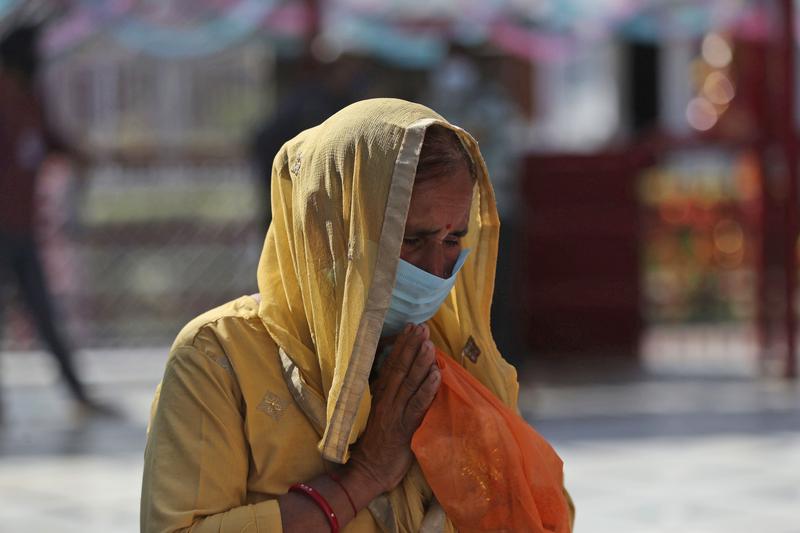 A Hindu devotee wearing a face mask to prevent the spread of the coronavirus offers prayers inside a temple dedicated to goddess Kali in Jammu, India, Oct 17, 2020. (PHOTO / AFP)

Still there are 783,311 active cases in the country, while 6,597,209 people have been successfully cured and discharged.

For the past two days the number of active COVID-19 cases has fallen below 800,000-mark, the first time in the past one and a half months.

The Indian government's focus has been on ramping up COVID-19 testing facilities across the length and breadth of the country. Till Saturday a total of 94,224,190 COVID-19 tests had been conducted, out of which 970,173 tests were conducted on Saturday alone, revealed the data from the Indian Council of Medical Research (ICMR).

Cinema halls, theatres and swimming pools were reopened in the country on Thursday after nearly seven months, amid strict COVID-19 restrictions like social distancing and regular sanitisation drives.

As the pandemic broke out in the country, India remained under a strict 68-day lockdown beginning March 25.

India's COVID-19 graph has been sliding downwards over the past few days, as new cases have fallen to below-70,000 per day.

Iran, the Middle Eastern country hardest-hit by the coronavirus, extended restrictions and closures in the capital Tehran into a third week on Saturday as its death toll rose above 30,000.

Schools, mosques, shops, restaurants and other public institutions in Tehran, where the infection rate has been highest, have been closed since Oct 3, and Tehran province governor Anoushiravan Mohseni Bandpey announced an extension of the measures until at least Friday, state media reported.

Health Ministry spokeswoman Sima Sadat Lari told state TV that 253 deaths and 4,103 new cases had been identified in the past 24 hours, taking the total number of deaths to 30,123.

Iran is experiencing its third surge of coronavirus infections and says its fight against the coronavirus has been hampered by US sanctions, which have limited its crude oil sales and its access to foreign banks.

On Wednesday it reported record daily figures of 279 deaths and 4,830 new coronavirus infections. It has registered more than 250 deaths and 4,000 cases in each of the past six days.

The rial currency was trading at a new low of about 322,000 per dollar on Saturday on the unofficial market, according to the foreign exchange website Bonbast.com, hit by worries over new US sanctions that may block some Iranian medicine purchases.

A requirement to wear face masks in public in the capital, imposed last Saturday, remains in effect, as does a ban on travel in and out of five cities including Tehran, which was announced on Wednesday.

An Auckland man tested positive for the virus Saturday after developing symptoms the previous day, Director-General of Health Ashley Bloomfield said Sunday. People the man had contact with in the days prior when he may have been infectious have been put in isolation.

News of the fresh community case comes hours after Prime Minister Jacinda Ardern swept to a landslide victory in a general election, largely on the back of her government’s successful response to COVID-19.

Meanwhile, 71 people died in the past 24 hours, taking the death toll to 9,224, the Turkish Health Ministry announced.

In addition, 1,401 patients recovered, raising the total recoveries to 302,499 in Turkey since the outbreak.

The rate of pneumonia in COVID-19 patients is 5.9 percent and the number of seriously ill patients is 1,428.

Of the new cases, one is an imported case, one is a community case and one is linked with the dormitories of foreign workers.

There are currently 37 confirmed cases who are still in hospital. Of these, most are stable or improving, and none is in critical condition in the intensive care unit.

Furthermore, 41 are isolated and cared for at community facilities. These are those who have mild symptoms, or are clinically well but still test positive for COVID-19.

Altogether 28 people have passed away from complications due to COVID-19 infection.

Both the number of cases and deaths in the Southeast Asian country are the highest in the region.

Israel eased coronavirus-related restrictions in most of the country on Sunday as new infections continued to decline, though localities with the highest morbidity numbers will still be subject to strict curbs.

The spread of the virus has slowed in Israel four weeks after it became the only rich nation to go into a second nationwide lockdown. So far, there have been more than 300,000 confirmed cases and almost 2,200 fatalities.

Workplaces that don’t receive the public can now reopen and pre-schools may operate. Restaurants, which until now could only offer deliveries, will be allowed to sell takeaway food and drink.

The number of confirmed COVID-19 cases in the Philippines surged to 356,618 after the Philippines' Department of Health (DOH) reported 2,379 new cases on Sunday.

The DOH said that the number of recoveries also surged to 310,158 after 14,941 more patients recovered. Meanwhile, 50 more patients died from the viral disease, bringing the death toll to 6,652.

Thailand on Sunday reported three more local COVID-19 cases, all are family members of two Myanmar nationals in Thai soil, who previously tested positive for COVID-19 this past week, said the Center for COVID-19 Situation Administration (CCSA) on Sunday.

The CCSA said that the five cases tested positive in Tak, a province in northwest of Thailand, bordering Myanmar.

The official data showed that 11,866 samples were tested in the last 24 hours across Bangladesh.

The total number of recovered patients in the country stood at 303,972 including 1,674 new recoveries on Sunday, said the DGHS.

According to the official data, the COVID-19 fatality rate in Bangladesh is now 1.46 percent and the current recovery rate is 78.23 percent.

Bangladesh recorded the highest daily new cases of 4,019 on July 2 and the highest number of deaths of 64 on June 30.

Health Ministry Director-General Noor Hisham Abdullah said in a press briefing that five of the new cases are imported and 866 are local transmissions, the majority of which were from the eastern state of Sabah, with 702 of the new cases reported.

Seven more deaths have been reported, bringing the death toll to 187.

Total COVID-19 cases in Malaysia surpassed the 10,000 mark in mid-September, nearly 9 months after Malaysia confirmed the first case in late January. But it only took a month for the figure to double due to the current wave which began on Sept. 20.