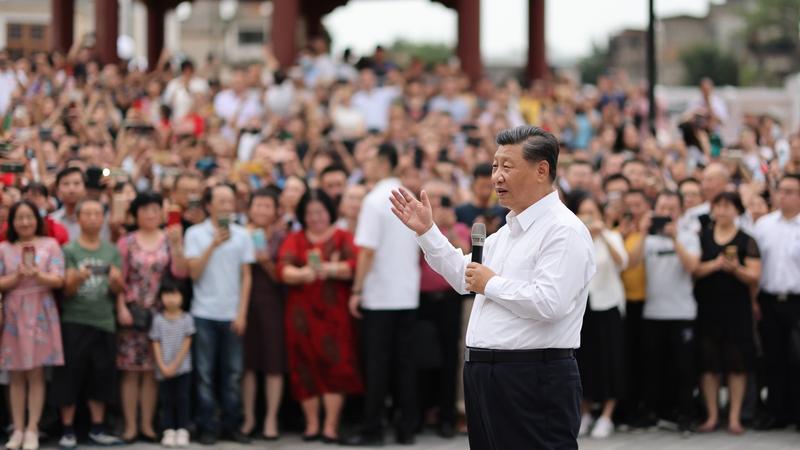 President Xi Jinping talks to residents and tourists in an old downtown area of Shantou, Guangdong province, on Oct 13, 2020, during his inspection tour of the province. (WANG YE / XINHUA)

President Xi Jinping has called for greater resolve and bolder moves to advance reform and opening-up, urging Guangdong province to take the lead in the journey of building China into a modern socialist country.

Xi, who is also general secretary of the Communist Party of China Central Committee and chairman of the Central Military Commission, made the remark during an inspection tour of Guangdong, which took him to the cities of Chaozhou and Shantou on Monday and Tuesday.

During his inspection of Guangdong, President Xi urged the province to take the lead in the journey of building China into a modern socialist country

There, he visited historical and cultural sites and an enterprise, and learned about the cities' efforts in coordinating epidemic control and socioeconomic work, as well as reform and opening-up.

On Wednesday, Xi attended a grand gathering in Shenzhen celebrating the 40th anniversary of the establishment of its special economic zone.

During his visit on Tuesday to Shantou, one of the earliest special economic zones, Xi visited streets in an old downtown area that had witnessed the city's history of opening-up, and talked with local residents.

He told them that his inspection tour of Shantou was a further statement made to both China and the international community that the Party will lead the Chinese people unswervingly on the path of reform and opening-up, work hard to build China into a great modern socialist country, and strive to realize the Chinese Dream of national rejuvenation.

Xi also visited a museum to learn about the city's history of opening-up as a port, its achievements as a special economic zone and its future development plans.

He called for concrete efforts from local authorities to fully utilize the opportunities offered by the building of the Guangdong-Hong Kong-Macao Greater Bay Area and the joint construction of the Belt and Road, leverage the city's strength and advance reform and opening-up in the building of the special economic zones in the new era.

Saying that Shantou is known as the hometown of many overseas Chinese, he stressed the need to unite the vast number of overseas Chinese in realizing the Chinese Dream, and enable them to make greater contributions to promoting the peaceful unification of the motherland and enhancing international exchanges and cooperation.

Xi also called for strengthening the protection of the historical and cultural sites amid rapid social and economic development, to ensure that the ancient city gains a new vitality.