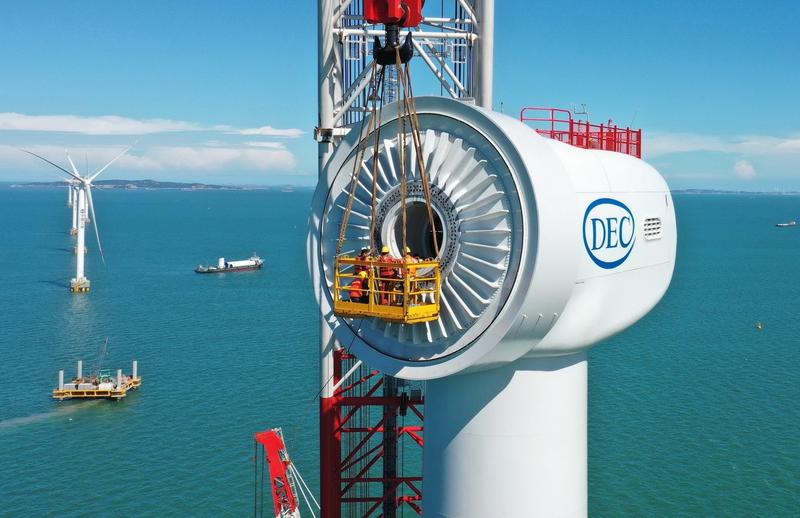 As subsidies for China's offshore wind power projects are to be removed by the end of 2021 to allow clean energy to compete with coal on price, insiders are appealing to the government to come up with transitional policies to enable the sector to smoothly transit the period.

Most of the offshore wind projects might not make profits without subsidies except for some that enjoy the country's best wind resources. The removal of subsidies in more than one year will pose challenges for the country's wind turbine makers.

Renewables have received subsidies since 2011. With gradual reductions in manufacturing costs, China has been reducing the amount of subsidies to renewable energy providers so as to ensure wind and solar generators can achieve "grid price parity" with traditional energy feed-stocks such as coal.

Wang Ziyue, an analyst with China Wind Research affiliated with BloombergNEF, said the removal of subsidies is expected to increase competition in the sector.

"Most of the offshore wind projects might not make profits without subsidies except for some that enjoy the country's best wind resources," said Wang. "The removal of subsidies in more than one year will pose challenges for the country's wind turbine makers."

"The next five years are crucial for the industry to achieve grid parity, and the government, design institutes, developers and turbine makers should work closely to come up with an integrated design and intensive development of scale strategy to achieve a reduction of costs with optimization in design, technological innovation and scale advantages."

To ensure the sector smoothly transits the period with reduced to eliminated subsidies, he also suggested supportive transitional policies from the government.

"As the cost of electricity continues to fall, we expect to see more offshore projects in some markets. The growing power demand, the need to decarbonize the economy and decreasing costs will help accelerate the adoption of offshore wind power," Wang added.

Yi said local government support or investment subsidies are still necessary in the upcoming two or three years so as to achieve grid parity in the offshore wind power sector in 2025.

Cao Zhigang, director of Goldwind, said earlier that time is still needed for offshore wind power to reach grid parity. As the sector is in a crucial phase of development that requires massive investment in product development and the construction of product chain, it's necessary for the government to come up with sustained government support to assist the healthy growth of the sector.

The government called on local authorities to be more rational when approving new capacity, especially for offshore wind power development, saying it would give priority to the construction of wind projects that are capable of operating without subsidies this year to ease a subsidy payment backlog of around 120 billion yuan (US$17.9 billion).

Developers of wind projects will be ordered to ensure their proposed on-grid prices do not exceed benchmark prices set by government, and the amount of power wasted because of grid connection failures should be below 5 percent, said China's National Energy Administration.

As COVID-19 has delayed renewable energy projects, developers in China are ramping up production to have capacity installed and connected to the grid before subsidies end. According to figures from the National Energy Administration, the country sees newly installed capacity of offshore wind power reaching 1.06 million kilowatts during the first six months this year, up 165 percent year-on-year.

Wind has become China's third-largest power resource after coal and hydro. The installed wind power capacity is expected to increase by 70 GW to 140 GW every year, according to the China Renewable Energy Engineering Institute, a think tank linked to China's National Energy Administration.

Solar and wind-based power will account for the majority of clean power in China's energy mix by 2050, it said.

Insiders believe the offshore wind power sector, which relies on capital investment especially at the initial phase, requires guidance from the government and State-owned enterprises at the outset. But future operations should still rely on the market for sustainable growth and development.

According to Liu Jizhen, an academician at the Chinese Academy of Engineering, the country's west-to-east power transmission project－an important part of China's resources strategy that transmits power from regions in the western parts of China to the electricity-hungry regions in the east－might not be sustainable.

It's necessary to not only rely on the west-to-east power transmission project, but also for the eastern parts to provide themselves with sufficient energy and thus it's important for the east to develop its offshore wind power, Liu said.

Offshore wind power will become an inevitable choice for China's renewable energy development, which not only enjoys a shorter transmission length, but also high efficiency and longer hours of operation, he added.

The combination of both offshore wind power projects and the west-to-east power transmission project will greatly complement each other, Liu said.

The government should step up oversight and evaluation of offshore resources and scientific and technological innovation to further assist the sector, he said.

Despite Europe's dominance, China was the leader in new offshore wind installations in 2019, installing more than 2.3GW of new capacity, followed by the United Kingdom at 1.8 GW and Germany with 1.1GW, according to the Global Wind Energy Council.

The fast expansion of China's offshore wind power project construction began in 2016 when the country's National Energy Administration came up with an offshore wind plan that aims to boost offshore wind development in coastal provinces including Jiangsu, Zhejiang, Fujian and Guangdong.

According to a report from Bloomberg New Energy Finance, China will be at the forefront of the increased generation of clean energy, taking pole position in wind power market share by 2050. Its total installed capacity in wind power, including both onshore and offshore, will reach 1,003 GW, accounting for 30 percent of the overall energy pie.