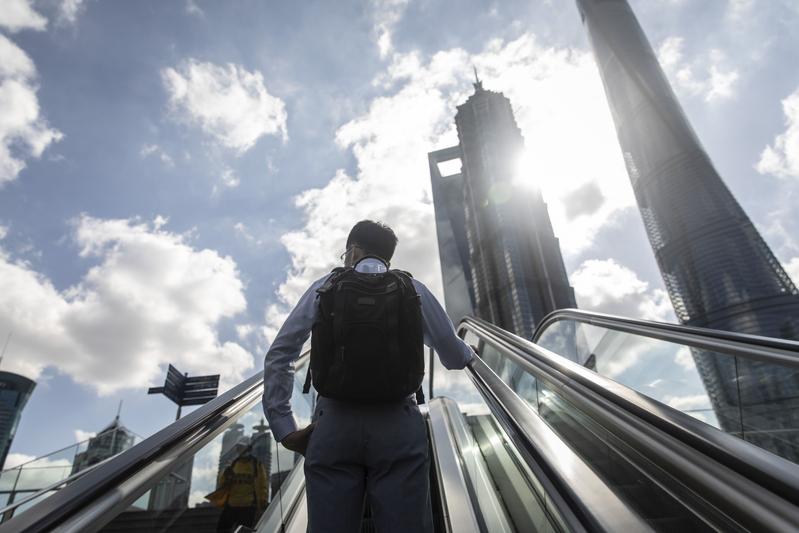 A morning commuter rides an escalator in the Lujiazui Financial District in Shanghai, China, on Oct 9, 2020.  (PHOTO/BLOOMBERG)

Chinese domestic equities are worth more than US$10 trillion for the first time since 2015, when a record crash erased half the market’s value in months.

The world’s second-largest stock market has added US$3.3 trillion since a low in March, helped by Beijing’s policies to encourage trading, a flurry of new listings that arrived with eased rules and the strengthening yuan. Stocks have been close to the US$10 trillion milestone since July, when China’s government acted to tame a speculative rally that had suddenly pushed a gauge of large caps near a 12-year high.

The country’s total market capitalization is now US$10.04 trillion and just shy of the all-time high, according to data compiled by Bloomberg as of Monday.

The country’s total market capitalization is now US$10.04 trillion and just shy of the all-time high, according to data compiled by Bloomberg as of Monday

Chinese shares rallied after a long holiday break on optimism the government will introduce reforms to turn the region around Shenzhen into a global technology hub and that the Communist Party of China will introduce policies to stimulate demand when it holds a major meeting later this month. Equities surged over the summer as margin debt climbed at the fastest pace since 2015 and turnover soared.

The CSI 300 Index of key stocks listed in Shanghai and Shenzhen was little changed as of the midday break on Tuesday. It’s gain of 18 percent this year tops the world’s major benchmarks.

China has added a new stock venue since 2015, with the Nasdaq-style Star market launching in Shanghai in July last year. Regulators waived rules on valuations and debut-day price limits for shares on the board. In August this year, a batch of 18 firms traded for the first time on the ChiNext Index under so-called registration-based initial public offerings, surging by an average 212 percent by the close.

A stronger yuan has also helped equities. China’s currency rose 3.9 percent last quarter, the most in 12 years. That advance has prompted the central bank to restrain the yuan’s rally while stopping short of encouraging declines.