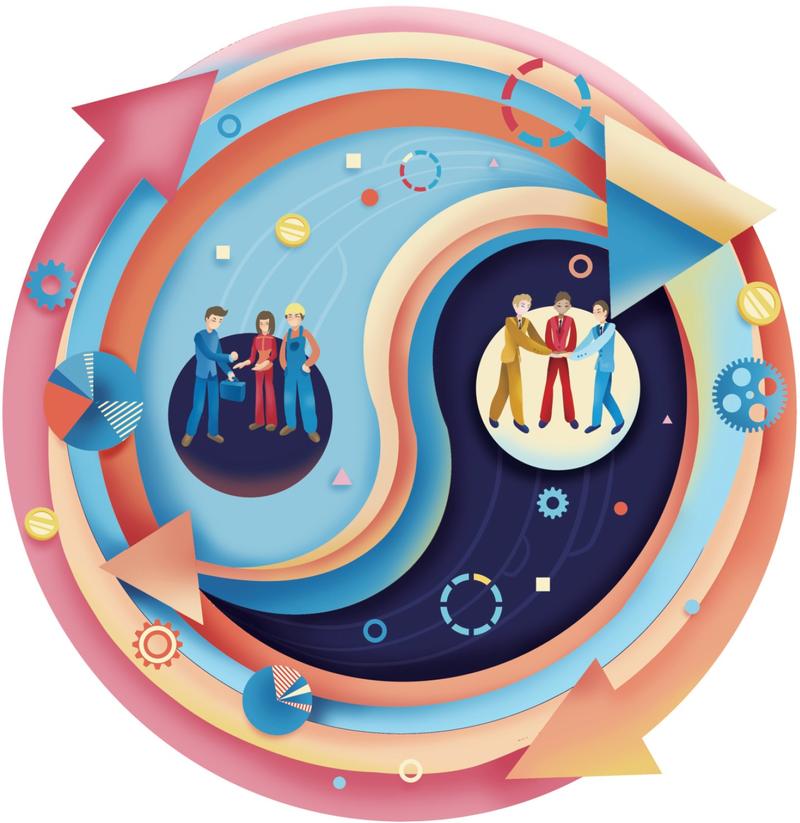 In May, China's central leadership proclaimed that it would "fully develop the advantages of the country's super-large market and the potential for domestic demand to establish a new development pattern featuring domestic and international dual circulations that complement each other".

"Dual circulation" has been the subject of intense discussion within and outside China ever since. Does the announcement signal a fundamental shift in China's growth paradigm or development strategy? Why was this new concept introduced, and what policy changes will it entail?

Initial reform period one of Catch-22

To answer these questions, one should briefly revisit the process of China's reform and opening-up since the late 1970s. Toward the end of that decade, the key hurdle preventing China from taking off economically was a shortage of foreign exchange reserves. Policymakers faced what seemed to be a Catch-22: without foreign reserves, China could not jump-start its exports, and without decent export growth, it could not earn and accumulate the minimum necessary amount of foreign exchange reserves.

In the event, China was lucky. The rise of the original equipment manufacturer (manufacturing inputs) sector in the 1970s gave China a window of opportunity to break through the deadlock. OEM manufacturing began to flourish in China's southeast coastal regions during the late 1970s and early 1980s.

And despite little or no foreign exchange reserves, Chinese OEM enterprises were able to import and process parts and components that were being outsourced by foreign corporations. These final products, with the value added contributed by Chinese enterprises, were then sold in international markets.

The processing trade allowed China to leverage its comparative advantage in abundant, low-cost skilled labor. Gradually, a feedback loop－from importing intermediate products to processing to exports－was established. With each round, Chinese enterprises were able to accumulate more reserves. And this increase in foreign exchange in turn enabled the importation of more intermediate products for processing and export.

The strategy turned out to be a stunning success. In 1981, Chinese exports and imports totaled just US$22.5 billion and US$21.7 billion, respectively. By 2013, China's total trade reached nearly US$4.2 trillion, making it the world's trade leader. In those three decades, China's GDP rose from 17th in the world, just behind the Netherlands, to second, surpassing Japan in 2010.

But export-promotion strategies can become self-negating when an economy grows past a certain point. After 40 years of expansion under the "great international circulation" model, China is no longer a small economy, and the global impact of its export drive is no longer negligible. In fact, since the turn of the century, the price of whatever products China purchases has tended to rise, whereas whatever it sells has fallen in terms of price.

Worse, China's relentless export drive has provoked (justifiably or otherwise) severe protectionist responses from importing countries. China's persistent trade and capital account surpluses have translated into a persistent accumulation of foreign exchange reserves, which reached US$3 trillion in 2014－an amount far above what is needed to ensure liquidity.

Equally worrying, despite the fact that China's net foreign assets stand at more than US$2 trillion, it has run investment-income deficits for more than a decade. This suggests there is something seriously wrong with China's inter-temporal and cross-border allocation of resources.

For its part, the Chinese government has long known the success of the "great international circulation" strategy has created new problems. In China's 11th Five-Year Plan (2006-10), published in early 2006, the authorities declared: "China's growth should be based on domestic demand, especially consumption demand.

But China's economic shift had already started by this point, as demonstrated by the fact that its trade-to-GDP and export-to-GDP ratios peaked in 2006, at 65 percent and 36 percent, respectively. Between 2008 and 2018, net exports as a share of Chinese GDP fell from 10 percent to 1 percent. And in almost every year since 2009, the contribution of net exports to China's GDP growth has been negative.

In light of these trends, it is clear that the introduction of a new concept-"dual circulation"－does not imply any fundamental change in China's growth paradigm. No matter what happens, China will never turn its back on the rest of the world.

Still, the United States administration's policy of "decoupling" and sanctions has left China with no choice but to double down on linking economic growth to domestic demand and support for domestic innovation, in order to secure a solid position in global value chains.

This imperative may explain why Chinese leaders have begun to emphasize "dual circulation". With its huge domestic market of 1.4 billion people, and well-developed manufacturing capacity and modern infrastructure, China will survive under any label.