By Xu Lin in Lanzhou 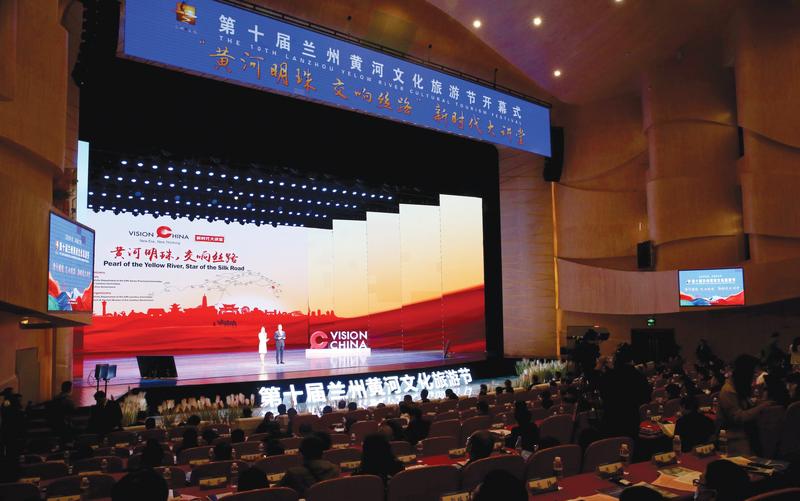 ‘Pearl of the Yellow River, Star of the Silk Road”, a Vision China event, was held on Sept 25 in Lanzhou, capital of Gansu province, as part of the 10th Lanzhou Yellow River Cultural Tourism Festival.

Organized by China Daily and the local government, the event aimed to implement the spirit of President Xi Jinping’s speeches and instructions about Gansu and boost the culture and tourism industry of Lanzhou, which is along the Yellow River.

Launched in 2018 by China Daily, Vision China invites political, business and academic speakers to tell China’s story from a global perspective and discuss China-related topics of international interest. It has been held 15 times in places like Beijing, Tianjin and the United Kingdom.

Keynote speakers from home and abroad shared their thoughts about the Yellow River civilization’s inheritance and development and its global significance and the development of the Belt and Road Initiative.

The river, which has been flowing for thousands of years, has nurtured the spirit of unremitting self-improvement, perseverance, national amalgamation and openness, thus forming the spirit of Lanzhou — inclusiveness, persistence, innovation and harmony, he said.

Zhou said as an essential vehicle to connect China with the world, China Daily will continue to report stories about poverty alleviation and reforms in Gansu, which will lead to the world’s better understanding of the Chinese spirit and China’s policy to help its people shake off poverty.

Wang Jiayi, Gansu province’s publicity chief, said as an essential hub of the ancient Silk Road, Gansu is a strategic tunnel connecting China with western and central parts of Asia. The local government has been striving to protect the Yellow River civilization and ecosystem and build the province into a tourism hub.

Lyu Linbang, deputy mayor of Lanzhou, said that during the past decade, the Lanzhou Yellow River Cultural Tourism Festival has evolved into a brand that enhances the city’s influence. With the integration of the culture of the Yellow River, Silk Road and ethnic group culture, Lanzhou has become a popular tourist city that attracts visitors with its exotic culture and great landforms.

In a video speech, Erik Solheim, former undersecretary-general of the United Nations and executive director of the UN Environment Programme, recalled his visit to Gansu to see the province’s beautiful landforms and the life of its people.

He said the Belt and Road Initiative presents a fantastic new opportunity for multilateralism.

“Those countries involved in the initiative see it as an opportunity for shared prosperity and for poorer nations to come out of poverty. But we need to take the Belt and Road in a greener direction,” he said.

Solheim said China is the biggest nation in the use of solar and wind power. It has a great deal of environmental experience to share with the world, such as the greening of the deserts in Gansu.

He said he is confident that together with others, China will create a shared global ecological civilization through the Belt and Road Initiative and other mechanisms.

Zhong Lina, vice-dean of the Institute for Big Data Research in Tourism and Culture at Beijing International Studies University, designed an enlightening route to travel with her son along the Yellow River to learn about Chinese civilization and diverse natural landscapes.

She said she hopes that more visitors from around the world, especially young people, will use the journey along the Yellow River as the starting point for understanding China.

Orlando Nieva Valente, former general director of Varoni Publicidad & Producciones TV & Media Broadcasting Company in Peru, said the marvelous scenes of the Yellow River remind him of the Amazon River, which originates in the Andes Mountains in his home country.

“The deforestation (of the Amazon region) is visibly staggering. Many organizations have been doing their best to protect it, but the economic interests of countries or large investors often, unfortunately, take priority,” said Valente.

In comparsion, China has for centuries been increasing the modernization of the main towns and communities along the Yellow River, turning them into prosperous metropolises like Beijing, he said.