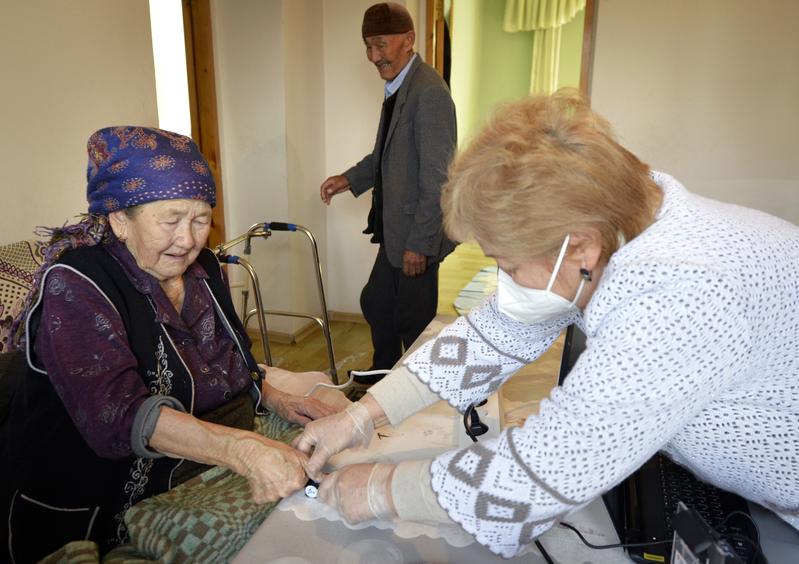 A voter, left, goes through the identification procedure for voting at home during parliamentary elections in the village of Koi-Tash, 25 km (15 miles) south of Bishkek, Kyrgyzstan, Saturday, Oct. 3, 2020. The right to vote at home is held by voters who are on the voter lists, but for health reasons or disabilities cannot come to the polling station. The main voting day of parliamentary elections in Kyrgyzstan will be on Oct. 4. (VLADIMIR VORONIN / AP)

BISHKEK - Kyrgyzstan votes in a parliamentary election on Sunday that will test President Sooronbai Jeenbekov’s political capital and his ability to forge new alliances amid the worst economic crisis in two decades.

Jeenbekov’s supporters look likely to win a significant number of seats in the legislature in the Central Asian country, but the current pro-presidential ruling coalition is certain to be upset due to internal splits in the two major political groups and widespread voter discontent.

Jeenbekov’s supporters look likely to win a significant number of seats in the legislature in the Central Asian country, but the current pro-presidential ruling coalition is certain to be upset due to internal splits in the two major political groups and widespread voter discontent

The campaign has been marred by allegations of vote-buying, and an August opinion poll ordered by the U.S.-backed International Republican Institute showed that 15 percent of respondents favoured the idea of voting against all parties.

A total of 16 parties are contesting 120 seats in the single-chamber parliament. If none of them wins more votes than the “Against all” option, a new election would have to be called.

The country of 6.5 million people has a history of political turmoil: in the past 15 years, two presidents have been toppled by revolts and a third is in prison after falling out with his successor.

Further instability would be a concern to close ally Russia. Moscow operates a military airbase in the former Soviet republic and is already dealing with major crises involving its allies Belarus and Armenia.

Some observers say the campaign promoting voting against all parties is in fact a ploy by the wealthiest parties, who would be able to outspend smaller competitors in a rerun.

The Social Democratic party (SDPK), which dominated the previous election in 2015 and served as the core of the pro-presidential coalition, has split after a rift between Jeenbekov and his predecessor Almazbek Atambayev.

Another major coalition member, “Respublika - Ata Zhurt”, which together with SDPK won more than a half of the seats in the previous election has also split. Some of its MPs will seek reelection on a different party’s ticket.

Some of Jeenbekov’s closest allies including his brother are now running for parliament under the flag of the Birimdik (Unity) party. But that party’s leader, Marat Amankulov, faced a barrage of criticism last month over comments in which he called for closer integration with Russia. Amankulov said the remarks were taken out of context.

Less than a week ahead of the vote, Jeenbekov travelled to meet Russian President Vladimir Putin who assured him of Moscow’s support.

Results of the election are likely to be known on Sunday night or on Monday, but given the fractured nature of the parties, it could be days or weeks before a government is formed.