The worst over or not, India concerned about countering COVID-19

By Aparajit Chakraborty in New Delhi 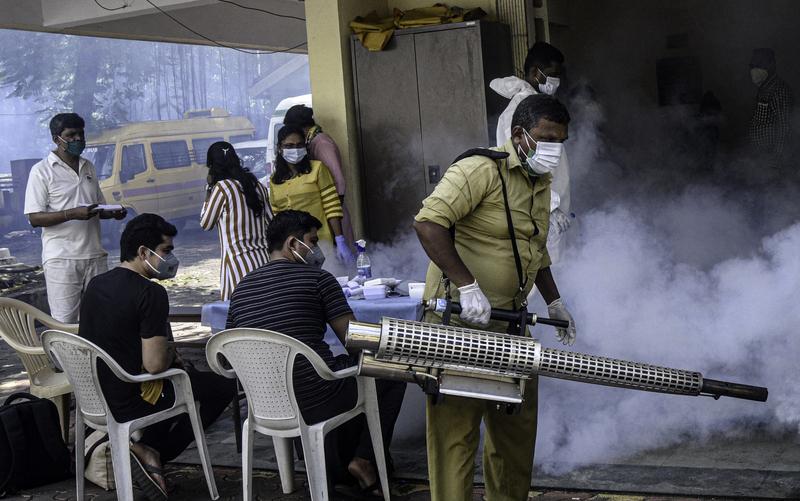 Workers cleanse a quarantine center in Mumbai on Sept 28. Newly confirmed COVID-19 cases in India have been decreasing over the past week, according to official data but remain high. XINHUA

Indian Union Health Minister Harsh Vardhan was just having a breath of relief from the country’s COVID-19 situation, when news of the vice-president came.

At a time when India’s pandemic tally has jumped over 6.2 million cases, Vice-President M. Venkaiah Naidu tested positive on Tuesday, though his official Twitter handle said he was asymptomatic and in good health.

In early September, India surpassed Brazil to become the country with the second highest number of coronavirus cases after the United States. But since Sept 17’s record high of 97,932 additional cases in a day, new confirmed cases have been on a steady decrease for the 12 consecutive days, according to Indian Council of Medical Research data, the first occurrence of such a continuous decline.

Another silver lining is that the total number of recovered people from the infection in India rose above 5.1 million, and a large portion of recoveries came within the last 11 days, Union Health Ministry said.

Vardhan said it is true that COVID-19 cases are likely to come down now, but “there should not be a sense of complacency among the people”.

The latest data in fact triggered a debate among the health care experts and policy makers in India about whether the pandemic has peaked or the worst is still ahead.

“Definitely we have crossed the peak,” said Mahesh Sharma, a member of parliament in Bhartiya Janata Party who represents the National Capital Region area and is also a doctor. “The gradual declining figure suggests that we have passed the worst situation. We expect it will go down now.”

But some health experts are predicting India will eventually overtake the US to claim the most cases globally.

“Although the government is making a lot of effort to conduct tests for all, in reality it is not possible,” said Sudhanshu Bankata a doctor at a private hospital in the national capital.

He said a large section of people are not coming for tests due to fear, because once they test positive, it will be difficult for them to afford the treatment, or to self-quarantine.

Vardhan said at this stage two things be crucial to further reducing the number of cases: government efforts and public behavior.

While the government is in the unlocking stage with the openings of hotels, restaurants, cinema halls, religious places and monuments, health experts are worried about the festive season later in October as there will be limited scope to ensure social distancing and keeping protocols in place.

A senior doctor at All India Institute of Medical Science who wished to remain anonymous said stern measures should be put in place “before it is too late”, in order to prevent a second wave.

Speaking about the findings of a second serological survey, ICMR Director General Balram Bhargava on Tuesday said it was found that urban slum and urban non-slum areas had higher SARS-CoV2 infection prevalence than that of rural areas.

Against this backdrop, the ICMR has recommended inventive containment strategies to be implemented by the states.

Vardhan emphasized that there is an urgent need to increase investment in healthcare infrastructure to prevent future pandemics.

The Union government is committed to increase public healthcare spending as a percentage of GDP from the existing 1.15 percent to 2.5 percent by 2025, Vardhan said.

India spends the least among BRICS countries: Brazil spends the most (9.2 percent), followed by South Africa (8.1 percent), Russia (5.3 percent), China (5 percent) of their GDP, according to the Organisation for Economic Cooperation and Development Developed nations spend more.

More horrifying pictures came from recent visits to a few crowded bus stops and marketplaces in the national capital.

At Anand Vihar bus terminus in Delhi, several people were found jostling to get into buses. Pointing to a long queue, a police officer said: “There are around 150 people in the queue. How can we control such crowds? Many in the queue did not have a mask on and complained that it is difficult to breathe through them.”

Another police officer said “We issue e-challans (citations) if we see vehicles carrying too many people without masks, but it becomes difficult to maintain decorum and distance.”

At a refilling station in Noida, Md Iqbal, who was refilling a car without a mask and hand sanitizer, said he could not afford them. Iqbal asked: “Who will pay to buy these?”

The author is a freelance writer for China Daily.