A game where culture wins

Players can enhance their knowledge of the country and good governance in an entertaining way, Xu Haoyu reports. 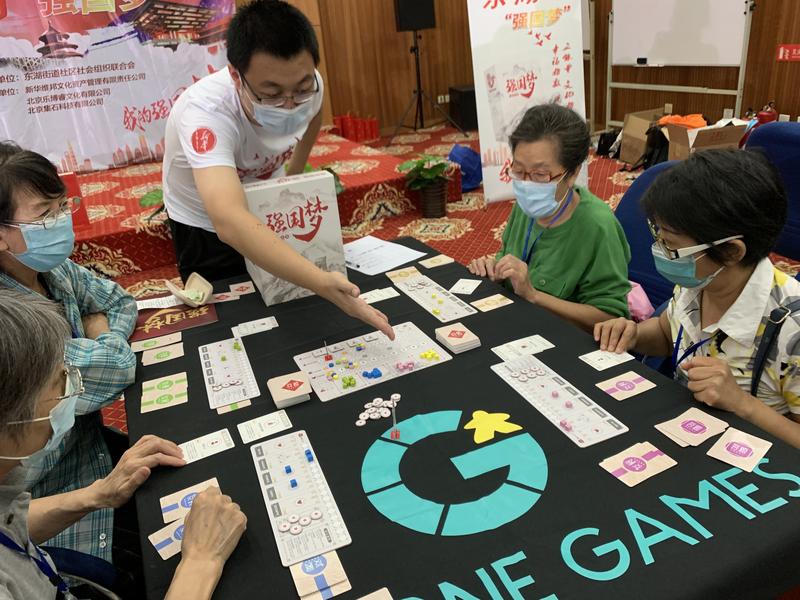 On Sept 11, a group of people at the Donghu community in Beijing's Chaoyang district play a newly-released board game, produced by Xinhua Bookstore, A Great Nation's Dream. (XU HAOYU / CHINA DAILY)

The atmosphere in the hall of the Donghu community in Beijing's Chaoyang district on Sept 11 was bristling. Forty people, ranging in age from 20-somethings to septuagenarians, were divided into groups of four, each group engrossed a board game.

It is a game that tests their knowledge of culture and history and casts a keen eye on the future. Players are given scenarios that challenge their ability to ensure good governance.

The game, A Great Nation's Dream, requires them to act as administrative figures to build a country in different scenarios while learning to apply the policies and theories of the Communist Party of China via series of questions and answers.

Pushing her glasses higher up on her nose, senior citizen Feng Xiulan took her time to carefully read what was written on the card in her hand before solemnly moving her pieces across the board. Her next move saw her sending specialists to oversee a construction project facilitated by high technology. "I never imagined myself playing a posh board game. My first experience is a good one," she says with a smile.

The game, launched in August, was produced by Xinhua Bookstore. The idea was conceived last April, during a brainstorming meeting of 20 insiders from various industries about the potential of creative cultural products. After much discussion came the decision to produce a board game, according to Zhou Guangyao, a marketing chief of Xinhua Bookstore.

Many of those present observed that board games remain a popular indoor pastime among young people, and that might prove to be an effective method for people to learn more about the nation by, for instance, implementing policies like a good provincial chief, as well as providing information on such issues as patriotism, culture and political theory, among other things, through gameplay.

The process of creating the game itself was "a happy dreamlike experience", according to Chen Minlu, 31, a co-founder of Beijing-based Gstone, an online board game community set up in 2018, which designed and created A Great Nation's Dream. 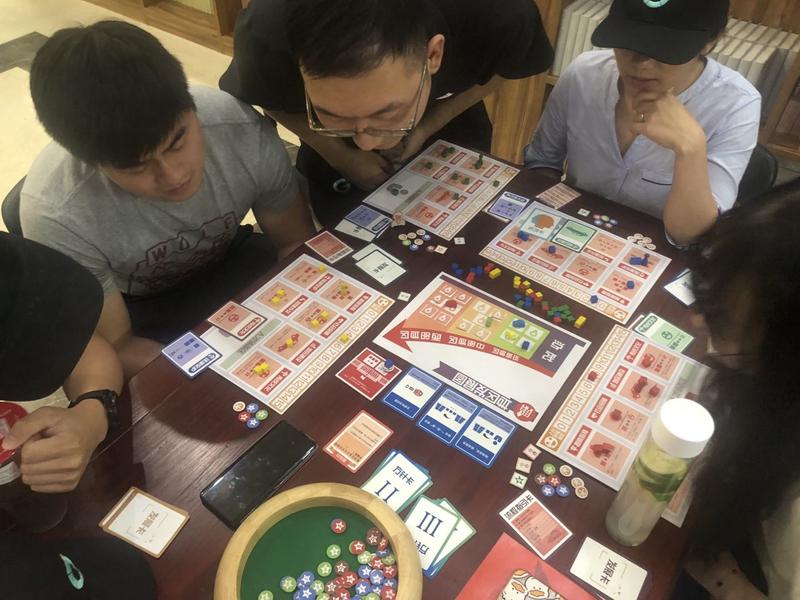 Young people play the board game, A Great Nation's Dream, through which they learn while being entertained－they are given scenarios of various types to act as administrative figures to build the country in a comprehensive way, meanwhile learning to apply the policies and theories of the Communist Party of China. (PHOTO PROVIDED TO CHINA DAILY)

To ensure quality design, the community gathered three teams to develop it. Four versions were showcased at five board game conventions, during which time more than 1,000 gamers test-played it over the course of 300-odd rounds of evaluations.

"Throughout the process we argued, fought and even screamed at each other over terminology, rules and game mechanics, yet we still felt good challenging each other. When seeing the testers' smiles, we were very content, like that we were all sharing the same dream," Chen says, who adds that in the game, all people, Chinese as default, work together to advance modernization in fields such as education, culture, social insurance and many other areas to attain harmony and happiness for all.

The game has received positive reviews from players, including Huang Xiaoling, a retired investigator of the Guangdong Federation of Trade Unions. "With the explosion of knowledge nowadays, this game provided a creative way to let our society embrace patriotism education," says Huang, a 30-year Party member.

Another player Ren Jinchao agrees. "The game can help people to learn more about Party principles and theories in a fun, relaxing way, to get better motivated toward building our nation together," Ren says. The military veteran adds that, during peacetime, a country needs to build its culture as a soft power.

The board game also won critical acclaim from experts in the field, such as Dan Bass, from the United States, who founded the board game convention Khan Kon a decade ago.

Bass came to China 27 years ago and studied at Peking University as an exchange student majoring in Chinese. He gave the game a thumbs-up.

He says it's pleasant to see that such a game can be enjoyed by people from different ages, and is suitable for the whole family to enjoy together. It was created to spread positive energy and promote the development of the gaming industry, he adds. The game, Bass says, is fun, easy and educational; it evolves great strategies and "by making your citizens happy, you win". 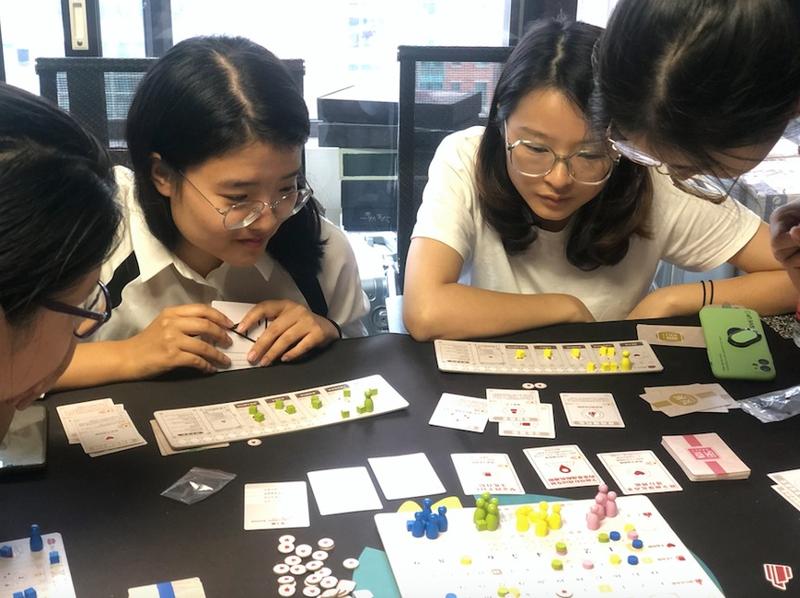 Young people play the board game, A Great Nation's Dream, through which they learn while being entertained－they are given scenarios of various types to act as administrative figures to build the country in a comprehensive way, meanwhile learning to apply the policies and theories of the Communist Party of China. (PHOTO PROVIDED TO CHINA DAILY)

The board game is the latest to actively highlight and promote Chinese elements and culture.

Two other previously launched games have also garnered attention for their focus on China and Chinese characteristics.

In 2018, Gugong (Forbidden City) designed by Andreas Steading from Germany won wide acclaim. Set in China in 1570, the game enables players to travel, sail down the Grand Canal, purchase precious jade, play a part in constructing the Great Wall, and meet the emperor. On BoardGameGeek, or BGG, an online community that provides a large database of board games, it scored 7.53 out of 10 after being played and rated by about 5,500 players.

Another game is Dunhuang: Pearl on the Silk Road, conceived by three Chinese designers. Players assume the role of landlords, seeking to achieve prosperity through utilization of property, making murals, creating porcelain, planting tea and producing clothes. It has achieved a score of 7.1 out of 10 on Gstone, and many reviews attest to its enjoyment, even after being played multiple times.

"In China, games used to be looked down upon as a waste of time," says Bass, "but these games might help overcome that prejudice."

Bass, who, as a child, started playing board games, such as Candy Land and Monopoly, says that they actually function as a good family pastime, creating bonds among relatives and friends.

However, compared to an advanced, mature board game market overseas, such as in the US, China's market scale has been growing somewhat slowly, and the market population is relatively fixed.

Zhang Zhiyang, a proficient player of the card game Magic: The Gathering, conceived by US mathematician Richard Garfield in 1993, says that players prefer board games that consume less time and online games with multiple players. Generally, a board game takes more than 45 minutes to play.

As the market remains in a developmental stage and problems like piracy still exist, Bass says, at present, board game producers are not making enough money.

Despite of all this, he is positive about the future of the industry, adding that people's awareness of copyright is improving, and the board game, A Great Nation's Dream, with its unique Chinese features, is proof that the domestic industry has something great to offer.