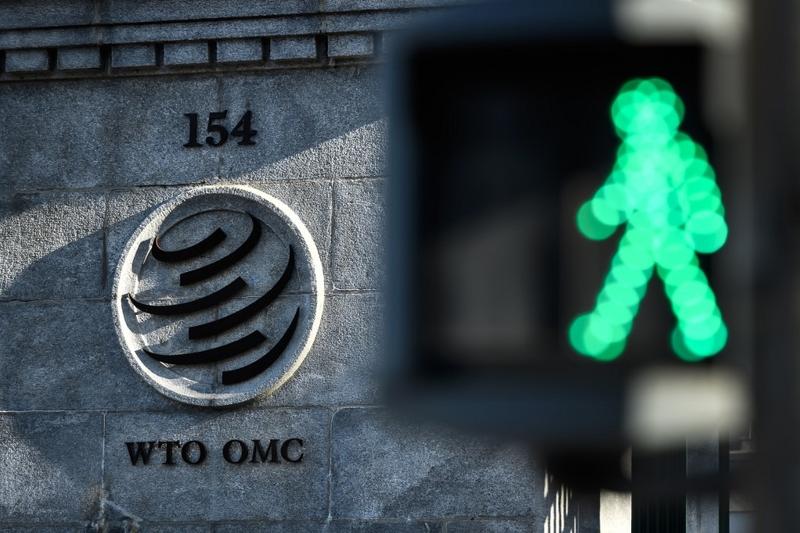 In this Dec 10, 2019 file photo, a green pedestrian traffic light is seen in front of the entrance of the headquarters of the World Trade Organization (WTO) in Geneva. (FABRICE COFFRINI / AFP)

The World Trade Organization has authorised the European Union to slap tariffs on US goods worth US$4 billion to retaliate against subsidies for US planemaker Boeing Co, people familiar with the matter said.

The delayed award provides a fresh source of potential trade friction weeks before November's US presidential election, after Washington last year began imposing tariffs on US$7.5 billion worth of EU goods over state support for Boeing rival Airbus

The delayed award provides a fresh source of potential trade friction weeks before November's US presidential election, after Washington last year began imposing tariffs on US$7.5 billion worth of EU goods over state support for Boeing rival Airbus.

The two sides have been locked in a 16-year-old dispute at the Geneva-based WTO over aid to their aircraft industries in a pair of cases that together represent the world’s largest-ever corporate trade dispute.

ALSO READ: US targets US$3.1 billion of EU, UK imports for new tariffs

They were informed of the decision by WTO arbitrators on Friday, and the award is expected to be published within weeks.

The US Trade Representative and the EU’s Washington office did not immediately answer requests for comment.

Boeing declined to comment on the confidential WTO report but accused Airbus of ignoring its recent decision to forgo tax breaks in Washington state to try to resolve the dispute.

Airbus, which recently announced its own concessions on funding in France and Spain, was not immediately available.

Sources on both sides said EU tariffs on products such as Boeing jets, which must still be adopted formally by the WTO, were unlikely to be imposed before the Nov 3 presidential election as Brussels seeks to avoid inflaming a bitter campaign.

Both sides are expected to claim victory, however, with US sources pointing to the higher core tariffs in favor of Boeing.

European sources said the latest award does not include some US$4.2 billion of tariffs against the United States left over from an earlier case, giving the EU US$8.2 billion in total firepower.

The United States says the previous award, granting the EU tariffs to retaliate against special tax treatment for US exporters, which the EU never implemented, is no longer valid because a law creating the disputed system was repealed in 2006.

The WTO has refused to be drawn into the controversy over unused tariffs, saying it has nothing to add to previous rulings on the former system of US Foreign Sales Corporations.

Analysts say the eagerly awaited ruling on EU counter-tariffs could finally ease years of deadlock, during which both sides signaled interest in settling the aircraft dispute while accusing the other of refusing to talk seriously.

“Everybody’s been waiting for this. It sets the stage for a negotiation,” said William Reinsch, a former senior US Commerce Department official and trade expert at the Council on Strategic and International Studies.