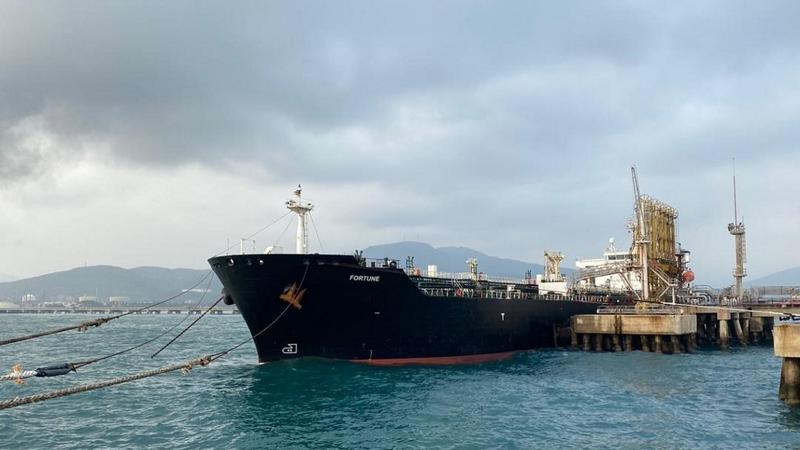 This file handout photo released by the Venezuelan Ministry of Popular Power for Communication and Information (Minci) on May 25, 2020 shows the Iranian-flagged oil tanker Fortune docked at the El Palito refinery after its arrival to Puerto Cabello, in the northern state of Carabobo, Venezuela. (PHOTO / AFP)

The first of a group of three tankers carrying Iranian fuel for gasoline-starved Venezuela entered the waters of the South American country on Monday, according to Refinitiv Eikon vessel tracking data.

Iran-flagged tanker Forest, transporting some 270,000 barrels of fuel loaded in the Middle East, entered Venezuela’s exclusive economic zone around 8:05 am local time (1205 GMT) without any disturbances, according to the data.

Iran-flagged tanker Forest, transporting some 270,000 barrels of fuel loaded in the Middle East, entered Venezuela’s exclusive economic zone around 8:05 am local time (1205 GMT) without any disturbances, according to the data

Two Iranian tankers following the same route, the Faxon and the Fortune, are crossing the Atlantic Ocean with estimated dates of arrival in early October.

The three vessels are expected to jointly deliver about 820,000 barrels of gasoline and other motor fuels to Venezuela, where lines of drivers waiting for fuel in front of gas stations have lengthened in recent weeks due to lack of domestic fuel output.

Even though both countries are under tough US sanctions, Washington has not moved to intercept the Iranian vessels, which made a previous fuel delivery to Venezuela between May and June. But the United States in July seized a separate group of Iranian cargoes bound for Venezuela through a civil forfeiture case.

The OPEC-member nations have tightened bilateral trade this year by exchanging crude, fuel, food, equipment for refineries and other industrial goods.

An Iranian very large crude carrier is expected to depart this week from Venezuela’s Jose port to export 1.9 million barrels of Venezuelan heavy oil for Iran’s national oil company, according to a source and loading schedules of state-run oil firm PDVSA.