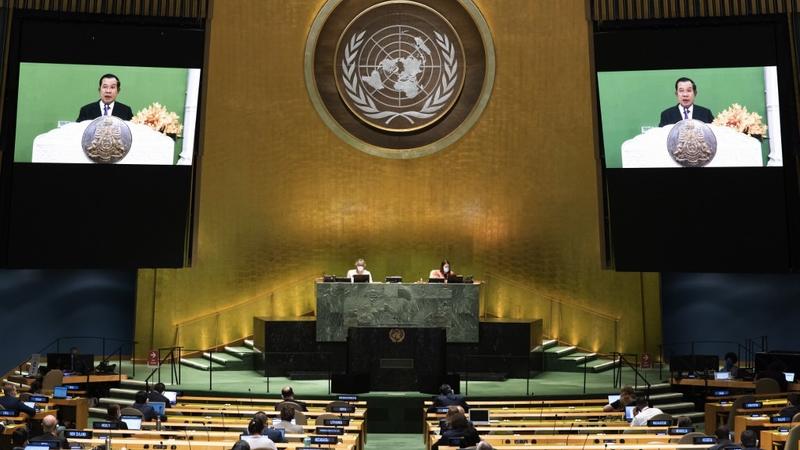 UNITED NATIONS - Prime ministers and foreign ministers on Saturday vowed to uphold the principles and purposes of the Charter of the United Nations and resist unilateralism through their pre-recorded speeches addressed to the ongoing 75th session of the UN General Assembly.

"It is important for all of us to reaffirm our conviction to the purposes and principles of the Charter of the United Nations which is the cornerstone of International law. This remains timeless, universal and an indispensable foundation for a more peaceful, prosperous, and just world," Mauritius Prime Minister Pravind Kumar Jugnauth said.

"It is also important that the institutions that we have collectively created operate independently and their rulings are respected by all countries irrespective of their size and power," he added.

"On this 75th anniversary of the United Nations, our commitment to multilateralism as embodied in the UN Charter remains unflinching," she said. "At the national level, despite numerous challenges, we are committed to upholding the values of multilateralism and working towards building a 'Sonar Bangla' free of poverty and exploitation based on democratic principles with full enjoyment of human rights, as envisioned by the Father of our Nation."

Bahamian Prime Minister Hubert Minnis told the virtual summit that his country will make "unwavering commitment" to the United Nations and always uphold the UN Charter principles "on which the organization was founded."

ALSO READ: US' political virus is a threat to multilateralism

"The trend of unilateralism and the exertion of force against weak countries is on the rise, undermining international order and multilateralism," said Cambodian Prime Minister Samdech Techo Hun Sen.

He said that voices of reason are stifled by the arbitrary practice of unilateral sanctions and other coercive political, economic and financial measures, because the strongest countries uphold their interests above everything else.

The prime minister underscored that "there is an abusive use of the right of interference, which has taken on such a proportion that it undermines one of the fundamental principles of the UN Charter, the right of peoples to self-determination and the national sovereignty."

"The damages on the current international order are causes for great concern. In addition, the possibility of a so-called new cold war has also become a significant concern because this small country, once caught in the midst of the cold war conflict, ideological rift and nationalist fanatism, paid a very high price," said Hun Sen.

"Thus, we must outright reject any attempt to allow tragic history to repeat itself," he added.

Syrian Foreign Minister Walid al-Moallem said that unilateral coercive measures imposed by some countries clearly violate international law. "The humanitarian exemptions they repeatedly invoke do not exist on the ground. These are false claims intended to cover their inhumanity and save face."

"We call on all affected countries and those that reject such measures to close ranks against them and alleviate their impact on our peoples. This should happen through cooperation, coordination, and concrete political, economic, and commercial means," he said.

Noting that the world is facing a period of prolonged turmoil, Singaporean Foreign Minister Vivian Balakrishnan said that the multilateral system is confronted by nationalism, xenophobia, the rejection of free trade and global economic integration, and the bifurcation of technology and supply chains.

"COVID-19 has in fact accelerated and intensified these pre-existing trends. Protectionism and unilateral action will ultimately be self-defeating," he said.