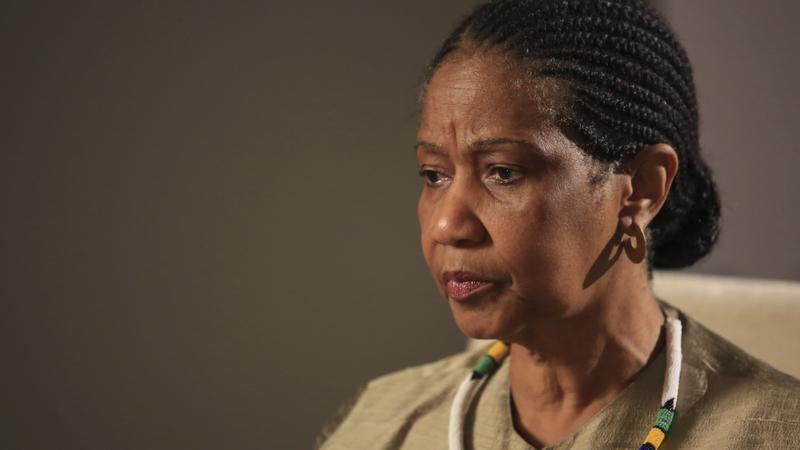 Phumzile Mlambo-Ngcuka, United Nations Under-Secretary-General and Executive Director of UN Women, speaks during an interview with The Associated Press in Sarajevo, Bosnia-Herzegovina, Nov  5, 2019. Mlambo-Ngcuka said the adoption of the 150-platform for action to achieve gender equality by 189 governments at the 1995 Beijing women's conference has pushed countries around the world to create a "gender machinery" including specific laws and government bodies dedicated to addressing the issue of gender equality. (KEMAL SOFTIC / AP)

UNITED NATIONS - UN undersecretary-general and executive director of UN Women, Mlambo-Ngcuka, has called for action to carry forward gender equality and prevent a reversal of hard-won progress because of COVID-19.

Exactly 25 years after the Fourth World Conference on Women in Beijing, the significance of the Beijing Declaration and Platform for Action is undimmed, she said in an exclusive written interview prior to a high-level UN meeting on the 25th anniversary of the Beijing Conference.

The outcome of the 1995 conference remains the most comprehensive and transformative global agenda for the achievement of gender equality and the empowerment of women and girls, she said.

Despite challenges, in the last quarter-century, countries in all regions have shown that change is possible, she said.

"We have seen the strength and the impact of collective activism grow and underline the importance of multilateralism and partnership. With laws to support women's equality, scaling up education, health and childcare services, and using gender quotas to boost women's representation, the world has found common solutions to shared problems."

However, progress for women in many areas has been unacceptably slow and the social and economic impacts of the COVID-19 pandemic threaten to reverse many of the hard-won advances made, said Mlambo-Ngcuka.

ALSO READ: UN official says fight for women's equality is far from over

In addition, due to persisting inequalities such as women's uneven access to paid work, it is estimated that without change, 47 million women and girls will be pushed into extreme poverty in 2021, bringing the total to 435 million with women between the ages of 25 to 34 especially affected, she noted.

First, supporting women's movements and leadership. This includes women in decision-making at all levels and a safe and enabling environment for civil society organizations.

Second, harnessing technology for gender equality. This includes closing the gender digital divide and ensuring that women have access to the digital economy.

Third, ensuring that no woman is left behind -- by empowering and guaranteeing the rights of those who have been pushed to the margins by decades of structural discrimination, and ending all forms of violence against women, including cyber violence.

"In 1995, the Beijing Conference raised attention to global issues that remain urgent today. Stepping up to this legacy, we must build back better, bringing women right into decision-making, and instituting the structural changes that intentionally enable this," she said.

A key to success is to support and promote the leadership of young people, she said.

UN Women has launched "Generation Equality" to mark this 25th anniversary and to engage young women and men in support of gender equality, in the hope that this process will mobilize and energize the world, in the same way that the Beijing Conference did, to create a clear path forward for the achievement of gender equality by 2030, said Mlambo-Ngcuka.

As UN Women celebrates its 10th anniversary amid the COVID-19 pandemic, the human rights of women and girls have more prominence, universality and more urgency than ever before, she said.

UN Women has supported more than 175 successful legal reforms and over 25 constitutional reforms to strengthen women's rights and trained more than 30,000 women political candidates to engage in successful campaigning

"We have been working to demonstrate the central role women can play in economic and social recovery, and to raise the alert on the dangers of failing to do so. We are proud to be the global champion and ally for women and girls. We are 10 years strong and ready for the next 10 years in the UN's Decade of Action (on the Sustainable Development Goals)," she said.

In the past decade, UN Women has worked with governments, civil society, the private sector and the UN system to place women's rights, priorities and voices high on the global agenda, she said.

UN Women has supported more than 175 successful legal reforms and over 25 constitutional reforms to strengthen women's rights and trained more than 30,000 women political candidates to engage in successful campaigning. Over 2 billion women benefit from better national policies to fully participate in economy. Thanks to its support, more than 1.5 billion women and girls benefit from enhanced legal protection and higher quality services to address violence, said Mlambo-Ngcuka.

UN Women has also deployed experts to investigate conflict-related sexual violence. This resulted in some of the first prosecutions of gender-related crimes under international law. And it has supported women's meaningful participation in peace processes in countries such as Colombia, Syria and Yemen, she said.