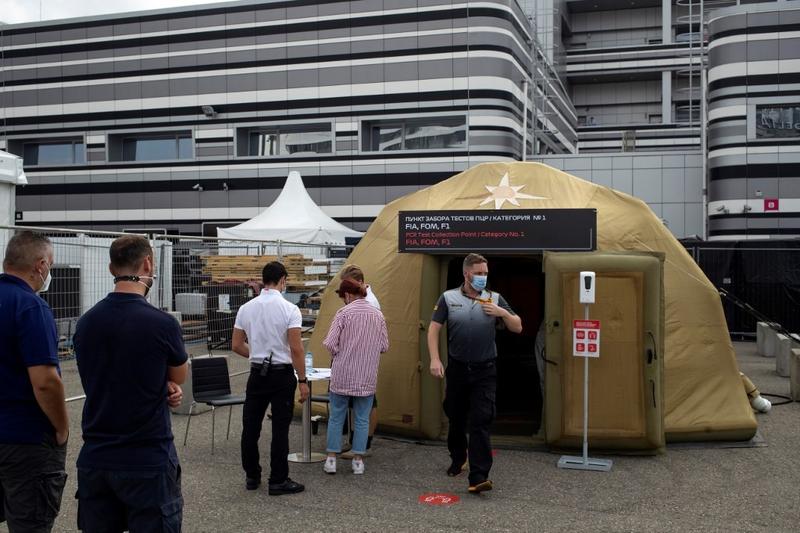 People queue in front of a medical tent to undergo a PCR test for the coronavirus disease at the Sochi Autodrom Circuit in Sochi on Sept 26, 2020. (PAVEL GOLOVKIN / POOL / AFP)

ALSO READ: WHO: Global virus toll could hit 2m before vaccine in wide use

Global COVID-19 deaths surpassed 990,000 on Saturday, according to the Center for Systems Science and Engineering (CSSE) at Johns Hopkins University.

The United States remains the nation worst hit by the pandemic, with 7,065,019 cases and 204,249 deaths, making up more than 20 percent of the global death toll.

Countries with over 30,000 fatalities also include Mexico, Britain, Italy, Peru, France and Spain.

Algeria on Saturday reported 160 new COVID-19 cases, the lowest daily increase since June 29, bringing the total tally of infections to 50,914, the Ministry of Health said.

The ministry also announced four new fatalities from coronavirus, raising the death toll in the North African country to 1,711.

Meanwhile, 102 more patients were discharged from hospitals, bringing the total number of recoveries to 35,756.

Algeria, which reported its first COVID-19 case on Feb 25, has been resuming economic and commercial activities since June 7 as part of its efforts to return to normal life. 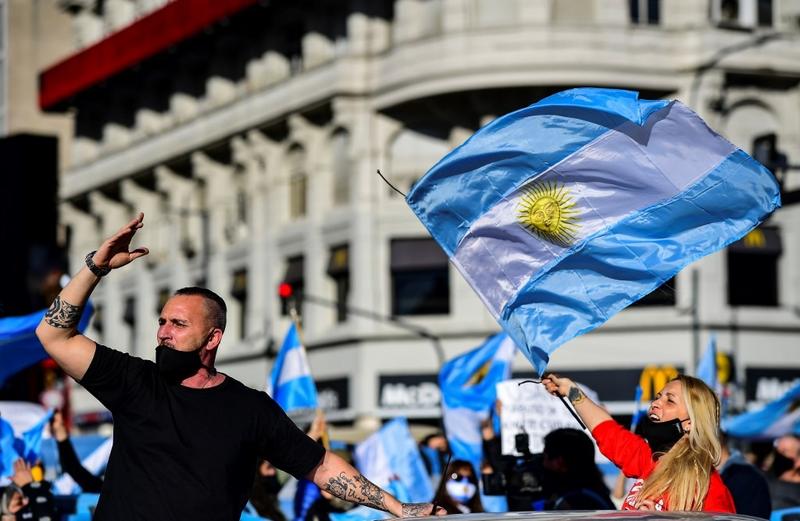 In this Aug 17, 2020, photo, people wave Argentine flags during a protest against the government health policies, regarding the tight lockdown measures against the spread of the novel COVID-19 coronavirus, at 9 de Julio avenue, in Buenos Aires, Argentina. (RONALDO SCHEMIDT / AFP)

Argentina’s coronavirus infections topped 700,000 on Saturday with new daily infections and deaths among the top five globally, Reuters data showed, despite seven months of quarantine that have ravaged the frail economy.

Health officials on Saturday reported 702,484 total infections since March and 15,543 deaths. On Friday, the province of Buenos Aires announced it had underestimated the death toll from COVID-19 by 3,523, outraging many Argentines already weary from months of lockdown that had failed to slam the breaks on the pandemic.

The additional deaths from Buenos Aires province were not incorporated in those figures, the health ministry said.

Argentina, which was already in the grips of a devastating economic crisis, was among the first countries in Latin America to implement a strict quarantine. But a gradual loosening over time and the spread of cases from the capital to the provinces have seen cases skyrocket. 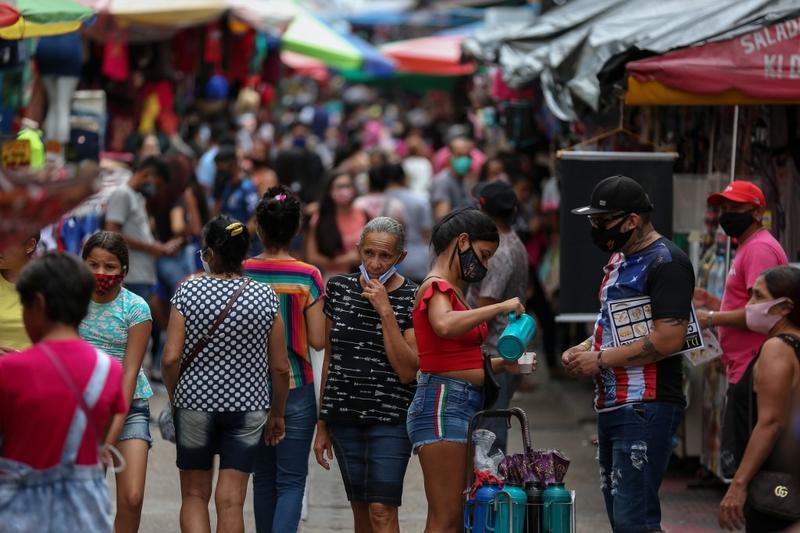 The Brazilian Ministry of Health on Saturday reported 869 new COVID-19 deaths in the last 24 hours, bringing the death toll to 141,406.

According to the Oswaldo Cruz Foundation, Brazil reduced deaths from COVID-19 by 10.35 percent over the last week compared with the previous week.

The number of infections in many states is also seeing a decline, with the northern states of Rondonia and Para, and the southern states of Santa Catarina and Rio Grande do Sul recording the best performance.

The Colombian Ministry of Health and Social Protection announced Saturday that the country's COVID-19 cases have risen to 806,038, with 25,296 deaths.

The National Indigenous Organization of Colombia revealed that to date, 27,608 members of various indigenous communities have been infected with the virus, of whom 1,013 have died.

A survey recently conducted by the National Administrative Department of Statistics showed that only 69.9 percent respondents said they would be willing to receive a vaccine in the future.

A new phase featuring Selective Isolation, Distancing, and Individual Responsibility began this month, as the country attempts to reactivate its economy amid the pandemic.

Egypt recorded late on Saturday 111 new COVID-19 cases, bringing the total infections in the country to 102,736, said the Health Ministry.

In a statement, the ministry's spokesman Khaled Megahed said 16 patients died from the novel coronavirus in the past 24 hours, taking the death toll to 5,869.

The spokesman also said 834 others were cured and discharged from hospitals, raising the total recoveries to 94,374.

The COVID-19 recovery rate has exceeded 90 percent in the most populous Arab country, according to Megahed.

Georgia reported 296 new COVID-19 cases on Saturday, the highest number since the outbreak of the virus in the country, bringing its total to 4,960.

A total of 166 of the 296 new cases were confirmed in the western region of Adjara, the National Center for Disease Control and Public Health said.

Public intercity transport has been suspended in the Adjara region since Saturday, in the wake of the recent suspension of municipal transport.

The National Center for Disease Control of Libya on Saturday announced 538 new COVID-19 cases, bringing the total confirmed cases in the country so far to 31,828.

The center said in a statement that it received a total of 1,900 suspected samples, of which 538 were tested positive, adding that 324 patients have recovered and eight died in the past 24 hours.

Since the first case was announced in March, Libyan authorities have taken a series of precautionary measures against the pandemic, which include closing the country's borders, shutting down schools and mosques, banning public gatherings and imposing a curfew.

Meanwhile, 399 additional deaths were reported, bringing the death toll from to 76,243, the ministry added.

Mexico's government plans to formalize its participation in the COVAX Facility, a global initiative to ensure equitable access to any vaccines against  COVID-19, Foreign Minister Marcelo Ebrard said on Tuesday.

Moldova reported a record 868 new COVID-19 cases Saturday, the highest single-day increase so far in the country, bringing the national total to 50,534.

Another 15 patients, including two medical employees, died of the disease in the past 24 hours, bringing the death toll to 1,279, the Health, Labour and Social Protection Ministry said late Saturday, adding that 37 medical employees have died of COVID-19 so far.

Currently, the country has a total of 11,815 infections, of whom 571 are in serious condition. A total of 37,440 patients have recovered from the disease so far.

Meanwhile, as the COVID-19 situation has rebounded in some countries, the country on Friday renewed the list of "Red Zone" countries from the current 53 to 62.

Morocco on Saturday reported 2,719 new COVID-19 cases, raising the total number of infections in the country to 115,241.

The death toll rose by 43 to 2,041, while 374 patients are in intensive care units, said the Moroccan Ministry of Health in a press release.

The number of recoveries from the coronavirus in Morocco increased to 94,150 after 2,218 more recoveries were added on Saturday, the ministry said.

The Peruvian health ministry said Saturday that the number of COVID-19 cases in the country has risen to 800,142, with 32,142 deaths.

"To date, 657,836 people have completed their period of home isolation or have been discharged from a health facility," said the ministry. Another 8,282 patients remain hospitalized, with 1,357 in intensive care units.

Despite the high number of positive cases, the government maintains that the numbers of infections and daily deaths have begun to decrease "progressively."

The government has announced that international flights will resume on Oct. 5.

Meanwhile, the government urged Peruvians not to lower their guard and to comply with preventive health measures, such as hand washing and social distancing to avoid new infections and a possible "second wave" of the disease. 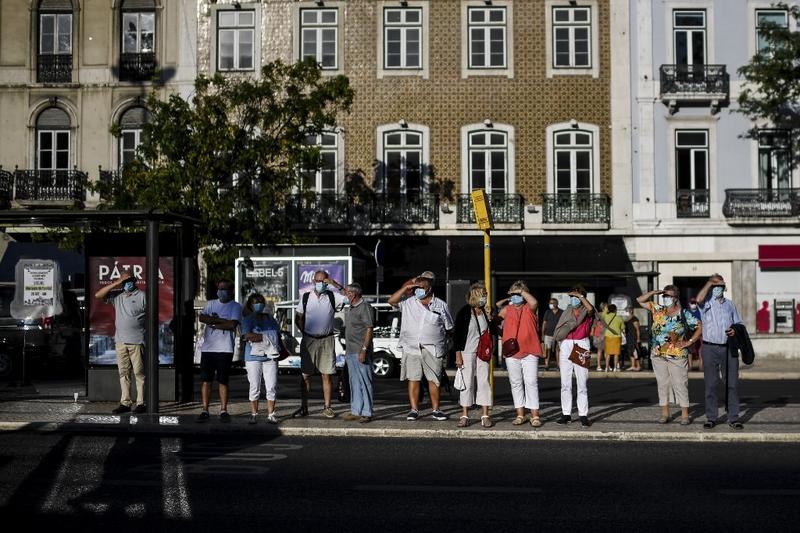 Thousands of workers gathered in cities and towns across Portugal on Saturday demanding higher wages and more government action to protect jobs threatened by the coronavirus pandemic.

During the peaceful protests, organised by Portugal’s biggest umbrella union, the CGTP, workers wearing masks and keeping a safe distance urged the country’s Socialist government to raise the national minimum wage to 850 euros from the current 635 euros, the lowest in western Europe.

“Workers’ rights are increasingly being stolen,” said Anabela Vogado, from trade union CESP, as she marched to Lisbon’s main square. “The fear of the pandemic cannot take our rights away.”

Unemployment in Portugal rose above 400,000 in August, according to the latest data, and is up more than a third on the same period last year.

In the southern Algarve region, which relies heavily on tourism, the number of people registered as unemployed soared 177 percent in August compared to a year ago.

It has also introduced a furlough scheme, allowing firms to temporarily suspend jobs or reduce working hours instead of firing workers. But those at Saturday’s protests believe the measures were not enough. 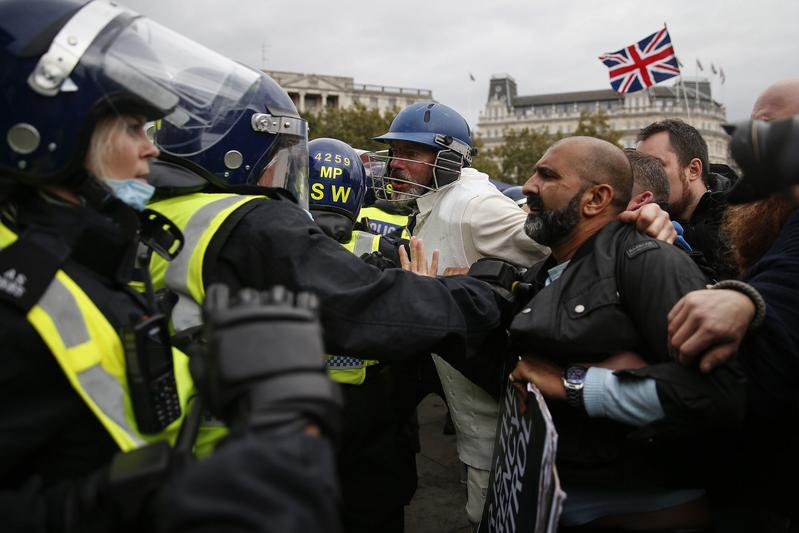 Protesters clash with police officers during a "We Do Not Consent" anti-lockdown rally at Trafalgar Square on Sept 26, 2020 in London, England. (HOLLIE ADAMS / GETTY IMAGES EUROPE / BLOOMBERG)

Thousands of maskless demonstrators took to the streets of central London to protest against the government’s expanded anti-coronavirus restrictions, sparking clashes with police.

Some in the crowd threw bottles at police, who used their batons against protesters and left some with visible injuries, according to Sky News. Many held placards with anti-lockdown and anti-mask messages, such as “This is Tyranny.” Sky showed images of a man with a bloodied head and said conspiracy theorists had addressed the crowd.

Public frustration has mounted as several European countries, including Britain, fight to contain the resurgence of coronavirus with piecemeal measures dubbed “lockdown lite.” Hospitalizations are climbing following a surge in cases to record levels in some countries. The UK reported more than 6,042 new cases on Saturday, down from a record 6,874 a day earlier.

There have been repeated anti-lockdown protests in London and Germany. Bar and restaurant owners in Marseille, France demonstrated as authorities ordered them to close for at least two weeks. There’s also dissent in Prime Minister Boris Johnson’s government: At least 40 members of parliament for the ruling Conservative Party have backed draft legislation that would give legislators more powers to challenge measures imposed by the government.

The London demonstration lost its exemption from rules that prohibit gatherings of more than six people, the police said, after protesters failed to stick to the organizers’ pledge to socially distance.

The London protest came days after Johnson’s government expanded restrictions to try to contain the surge in new cases.