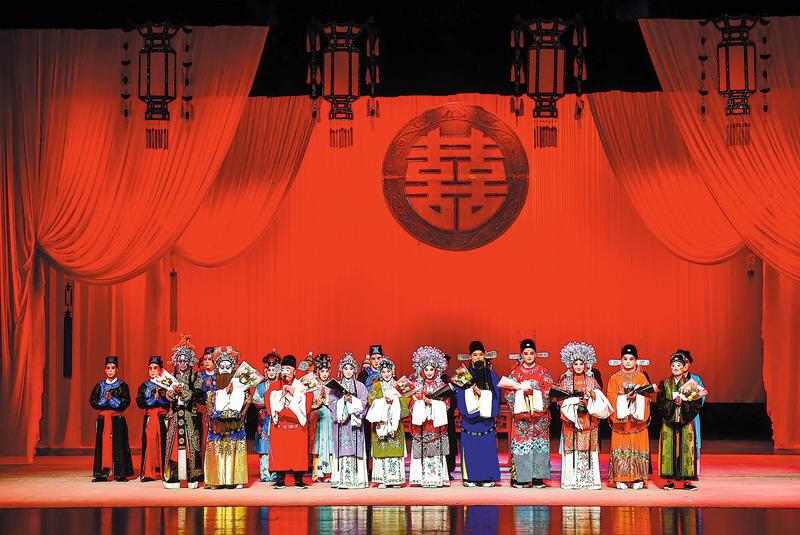 The 2020 Chinese Opera Gala (Kunshan) will celebrate 348 types of operas from across the country in Kunshan, Jiangsu province, from Oct 11 to late November. (PHOTO PROVIDED TO CHINA DAILY)

The 2020 Chinese Opera Gala (Kunshan) has now entered the final countdown. The festival will spotlight and celebrate 348 types of operas from across the country in Kunshan in East China’s Jiangsu province, the birthplace of Kunqu Opera, from Oct 11 to late November.

Lyu Yuzhong, the first-level inspector of the Art Department of the Ministry of Culture and Tourism, told a press conference last month that the festival this year has been upgraded to ministry level. The Ministry of Culture and Tourism and the local government of Jiangsu province will host the event instead of the ministry’s art division as has been the case in the last two years.

The Department of Culture and Tourism of Jiangsu province and the local government of Kunshan will both organize and oversee the event.

There will be 126 plays from 25 provinces, autonomous regions and municipalities directly under the central government across the country. These include 19 grand operas (one Cantonese Opera performed jointly by Guangdong, Hong Kong and Macao) and 107 opera highlights, which represent a milestone in the history of Chinese opera.

The festival is a carnival as it will showcase many traditional classic repertoires such as Pu Opera Xue Gang Opposing the Imperial Court, and the Shaoxing Opera The Monkey King’s Three Beats.

In addition, some of the dramas have brought unique regional characteristics, such as Guangxi’s Maonan Opera Combine Hearts with Hearts, and Yunnan’s Kunming Opera Heroes.

In terms of actors, 10 plays are to be led by 12 Plum Blossom Award (the highest theatrical award in China) actors, including Li Shujian, the two-time winner of the award in Henan Opera Cheng Ying Saves the Orphans.

Feng Huiqing, deputy director of Kunshan Culture, Sports, Radio, Television and Tourism Bureau, believes their role as both the planner and implementer of the festival for three consecutive years has helped them expand a considerably popular base, on which they aim to meet higher standards.

“All the plays that participated this time were selected by experts and scholars after conducting a census of China’s regional operas for more than two years. This is the third time that the rich forms of China’s multiple opera types will be fully displayed, and it is a great innovation as we focus on presenting the new beauty of Chinese operas,” Feng said.

“The southern and northern tunes gather in the birthplace of Kunqu Opera, one of the earliest traditional Chinese drama, showing the vigor and prosperity of excellent traditional culture in the new era.”

Feng reveals that a closing ceremony of the festival will also be held in late November, bringing together well-known contemporary opera artists.

“There are many unforgettable stories during the entire event every year, and it’s not easy to actually achieve a reunion. Many of the 348 types of dramas are constantly on the brink of extinction. And our festival can promote the endangered operas with our special funds, as well as attract the support of the local government for that particular opera, especially in poverty-stricken regions, to survive,” Feng added.

“The pandemic this year coupled with the transportation and weather conditions in some flood-hit regions have caused extra problems,” he said.

“We keep hearing various stories such as some troupes, under the efforts of their entire villagers, raise transportation fees household by household, break through many obstacles and overcoming many difficulties, and finally manage to make to our stage. The reunion is actually the final result of everyone’s concerted efforts and hard work.” 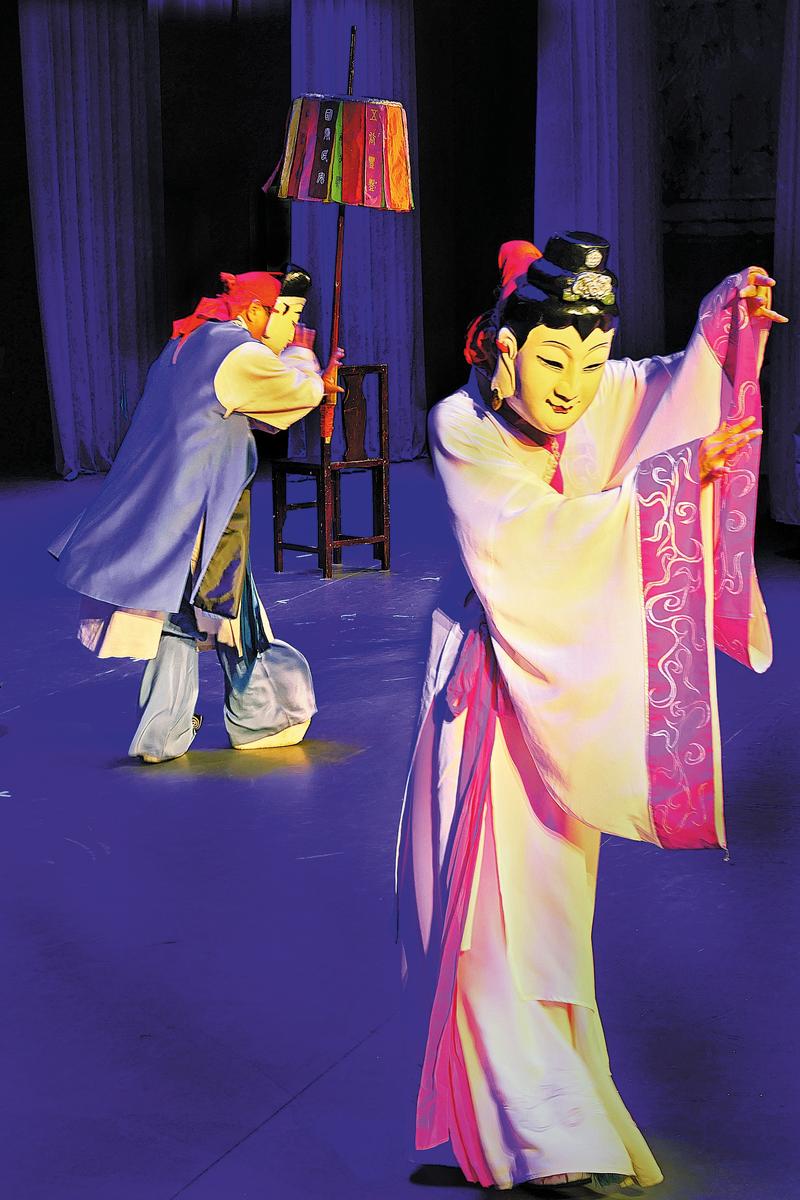 The 2020 Chinese Opera Gala (Kunshan) will celebrate 348 types of operas from across the country in Kunshan, Jiangsu province, from Oct 11 to late November. (PHOTO PROVIDED TO CHINA DAILY)

Feng and his team will also bring eight major derivative activities in the hope of “converging the new face of Chinese opera”. This year, it will highlight cultural exchanges and travel integration.

To dig out more potentials from the opera culture, the organizing committee will record the oral history of all participating opera types, and promote the development history and artistic characteristics of each opera type.

The cultural and tourism integration themed event of Watching Hundred Operas and Traveling in Jiangsu will be planned during the festival with six boutique cultural routes covering Suzhou, Wuxi, Changzhou, Huai’an and Yangzhou in Jiangsu province.

“These activities are to enrich the life of our audiences. It is also to promote an opera-loving atmosphere, an opportunity especially to cultivate young audiences, and then discover some young opera talents for the inheritance of operas,” said Ye Feng, chief of the art and culture department of Kunshan Culture, Sports, Radio, Television and Tourism Bureau.

The Chinese are familiar with famous Kunqu Operas such as The Peony Pavilion, Peach Blossom Fan and Eternal Life Palace.

Kunqu Opera is known for its beautiful, lingering and gentle tune. Originating in the late Yuan Dynasty (1271-1368) in Kunshan and giving birth to some of the most influential vocal dramas in the Ming (1368-1644) and Qing (1644-1911) dynasties, such as Peking Opera, Pu Opera, Xiang Opera and Sichuan Opera, Kunqu nurtured and nourished Chinese opera and earned the reputation as “the ancestor of hundreds of operas” and “the master of all operas”.

In May 2001, Kunqu Opera was listed as a masterpiece of human oral and intangible heritage by UNESCO. In March 2003, Kunshan was named the hometown of Chinese folk art Kunqu Opera by the Ministry of Culture.

The city has attached great importance to culture, especially in the protection, inheritance and development of traditional culture.

You Tengteng, a Kunqu artist formerly from Yongjia Kunqu Troupe in Zhejiang province, transferred to Kunshan Contemporary Kunqu Opera Co. She said what attracted her to Kunshan was the city’s emphasis on culture and opera. The first time she arrived in Kunshan at the train station, she was captivated by the promotion banners of the opera almost everywhere.

“So after two years of struggle, I decided to land in Kunshan Contemporary Kunqu Opera Co, and after that, I had a more in-depth understanding of the importance of hosting the Chinese Opera Gala,” she said.

“As a young actress, I am very lucky that we have entered the best of times for Chinese operas, and we are fortunate to be able to come on the same stage with some of the biggest actors of various opera types to attend the closing ceremony. I will also cooperate with the famous Kunqu Opera master Yu Jiulin for a highlight show of The Peony Pavilion.”

Although the festival will take place in Kunshan, Feng insists the spotlight should not be given to Kunqu Opera; all Chinese operas must have an equal opportunity. “In the course of the performances, Kunqu Opera is actually 1/348. In this respect, I think it embodies a kind of equality, a kind of responsibility,” Feng said.

The host of the festival has dedicated a plot of land of 348 trees, one for each type of drama. In a state of strolling in a leisurely courtyard, visitors will get to know the strength of the operas, and they are also constructing a museum for the hundred Chinese operas.

Since its inauguration in 2018, the festival has organized 232 opera types, 274 repertoires, and 134 performances in 30 provinces. About 80,000 people have watched the performances live and online. The number of viewership has exceeded 35 million. This cultural feast is unprecedented in the history of Chinese opera culture.

“It not only demonstrated the unique charm of classic operas, but also brought ethnic operas and endangered operas onto the national stage, stimulating the vitality and potential of Chinese operas,” Feng said.