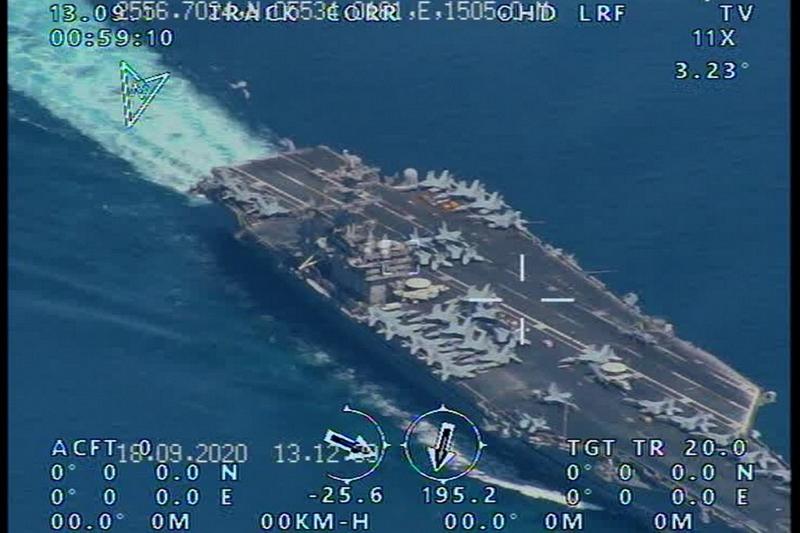 This handout photo provided by Iran's Revolutionary Guard Corps (IRGC) official website via SEPAH News on September 23, 2020 reportedly shows the USS Nimitz Aircraft carrier prior to entering the Strait of Hormuz and the Gulf. A US aircraft carrier passed the Strait of Hormuz to enter the Gulf on September 18 amid Washington threats to enforce "UN" sanctions without the backing of Security Council partners, the Navy announced. (HANDOUT / SEPAH NEWS / AFP)

Iran’s Islamic Revolutionary Guard Corps opened a new naval base along one of the world’s busiest oil transit routes on the Persian Gulf as the US is set to impose new sanctions on Tehran.

The Shaheed Rahbari base near the port of Sirik, on the eastern side of the Strait of Hormuz, took six years to build and will give Iran “full control” of various vessels that use the channel, the Persian Gulf and the Sea of Oman, a report on Press TV’s website said, citing an opening ceremony attended by IRGC commander Major General Hossein Salami.

“The country’s combat operations, ship operations, reconnaissance as well as defensive and offensive operations in the Persian Gulf will further develop,” Salami was quoted as saying on Thursday.

On Wednesday the IRGC said it had flown a surveillance drone over a US aircraft carrier, the USS Nimitz, as it transited through the Strait of Hormuz last week, the semi-official Tasnim news agency said

On Wednesday the IRGC said it had flown a surveillance drone over a US aircraft carrier, the USS Nimitz, as it transited through the Strait of Hormuz last week, the semi-official Tasnim news agency said. Its report included aerial pictures of the vessels which it said had been taken by the unmanned aircraft.

Thursday’s announcement comes a month after the United Arab Emirates, Iran’s neighbor across the Persian Gulf, normalized relations with Israel, opening the way for it to have an official presence in the waterway for the first time.

ALSO READ: US to slap sanctions on over two dozen targets tied to Iran arms

Tensions between Iran and the US have escalated dramatically since President Donald Trump withdrew from the 2015 nuclear deal two years ago and reimposed stringent sanctions on the Islamic Republic, triggering a security crisis in the region.

In Washington, US Special Representative for Iran and Venezuela Elliott Abrams told a hearing at the Senate Foreign Relations Committee on Thursday that the United States will slap new sanctions on a number of Iranian officials and entities including a judge who sentenced Iranian wrestler Navid Afkari to death.

Navid Afkari was executed earlier this month after being convicted of stabbing a security guard to death during anti-government protests in 2018, Iranian state media reported. Iran’s Supreme Court rejected a review of the case in late August.