By ​Liu Yinmeng in Los Angeles 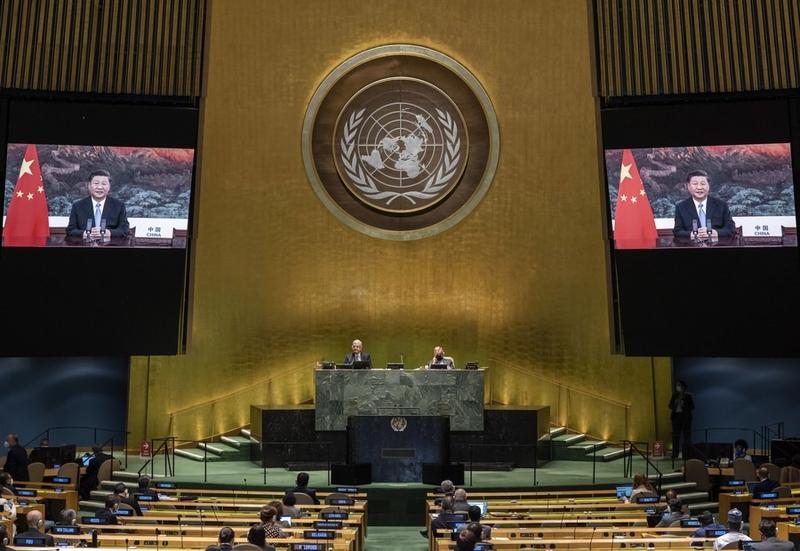 China's ambassador to the United Nations said President Xi Jinping's speech at a UN summit on Monday gave important guidance for a strong UN by conveying a clear message of support and confidence for multilateralism and a shared future for mankind.

The remarks by Zhang Jun, China's permanent representative to the United Nations, came after Xi's speech at a UN General Assembly high-level meeting to commemorate the 75th anniversary of the international organization.

"The feeling I want to highlight is that President Xi pointed out the direction for the future of the United Nations, added confidence and injected strength. This is also the common feeling of representatives of many countries," he said.

In his speech, President Xi reiterated his support for the United Nations, emphasizing that China will always be a practitioner of multilateralism, actively participate in the reform and construction of the global governance system, and promote the building of a community with a shared future for mankind, demonstrating the strategic vision of the leaders of major powers and world-class leaders.

ALSO READ: Xi: No nation should act like boss of the world

Zhang echoed Xi's remarks by reiterating China's commitment to uphold multilateralism against protectionism and unilateralism. He emphasized the need for a people-centric approach and stressed that China firmly upholds the UN-centered international system.

Xi affirmed the positive role played by the UN from a historical height, Zhang said, adding: "President Xi pointed out that the United Nations emerged with renewed vigor and vitality. It embodies the aspiration of the over 7 billion people for a better life and stressed the need to adhere to multilateralism and uphold the purposes and principles of the UN Charter.

"These important conclusions can be said to point out the right direction for the development of the world and the future of the United Nations and are of great and far-reaching significance in the current situation," the ambassador added.

Due to concerns about COVID-19, the General Assembly meeting has adopted a mixed format that includes in-person meetings and videos. Heads of states from more than 180 countries, including China, addressed the assembly in New York via recorded messages. This is a historic first for the international organ, Zhang said.

"At the same time, the world is facing unprecedented challenges. The US' aggressive practices of unilateralism, protectionism and bullying have severely impacted and destroyed the international order, multilateral cooperation and the role of the United Nations," said Zhang, adding that "the world is at a crossroads".

The international community generally has high hopes and expectations for the series of high-level events of the UN General Assembly and hopes to find answers from the speeches of leaders of various countries, Zhang said.

In light of "what kind of UN the world needs and how the UN should play its role in the post-epidemic era", Xi put forward four suggestions, Zhang said. He stressed that the United Nations should uphold justice, enforce the rule of law, promote cooperation and focus on real action.

"These important proposals grasp the key challenges facing the UN and meet the ardent expectations of the people of all countries for the United Nations. They are the Chinese wisdom that President Xi has contributed to the development of the UN at an important historical juncture," the ambassador said.

Zhang said that the support of China－as a permanent member of the Security Council and the world's second-largest economy－is vital and indispensable to the future of the UN, Zhang said.

"In his speech, President Xi reiterated his support for the United Nations, emphasizing that China will always be a practitioner of multilateralism, actively participate in the reform and construction of the global governance system, and promote the building of a community with a shared future for mankind, demonstrating the strategic vision of the leaders of major powers and world-class leaders," he added.

"The future development path of the UN will not be smooth, but we have reason to believe that with China's strong support and the joint efforts of all countries, the UN will continue to play an important role in maintaining world peace and promoting common development," he said.

Eric Heikkila, a professor in the Price School of Public Policy at the University of Southern California and the author of the book China from a US Policy Perspective, emphasized the importance of nations committing to the UN and working together.

"The United Nations was created in the aftermath of a terrible war that had engulfed much of the world and left the prior international order in ruins," Heikkila said. "Now, 75 years later, much has changed, but the need for a just and effective international order has not diminished.

"It is the responsibility of each nation to renew its commitment to the principles of the UN or to work constructively, in partnership with others, to replace it with something better."