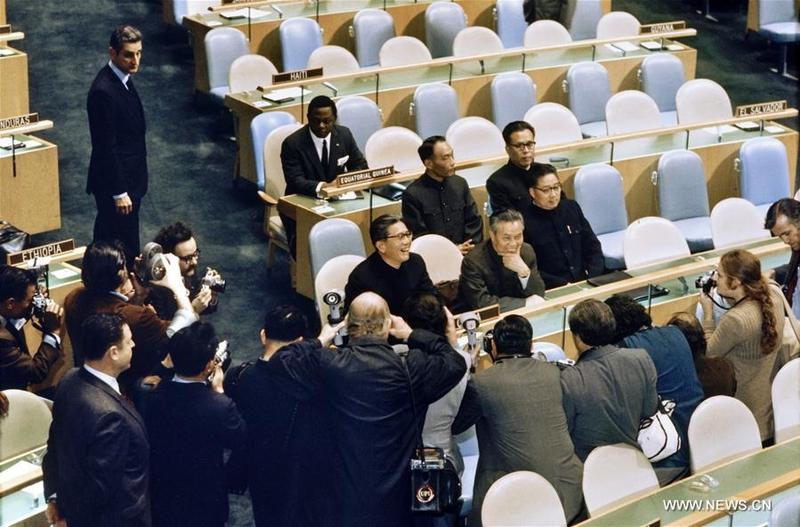 Photographers take pictures of the delegation of the People's Republic of China when the delegation attended the 26th UN General Assembly on Nov 15, 1971. (PHOTO / XINHUA)

It has been 75 years since the United Nations was founded. China's cooperation with the UN is growing stronger and deeper and is entering a new era.

China has taken a more proactive part in international affairs and made greater contributions to world peace and development. China stands for the international system built around the UN.

The UN officially came into existence on Oct 24, 1945. China is a founding member of the intergovernmental organization and the first country to sign the UN Charter.

On October 25, 1971, the 26th Session of the UN General Assembly, recalling the principles of the Charter, adopted Resolution 2758 with an overwhelming majority and decided to restore the lawful seat of the People's Republic of China in the UN. 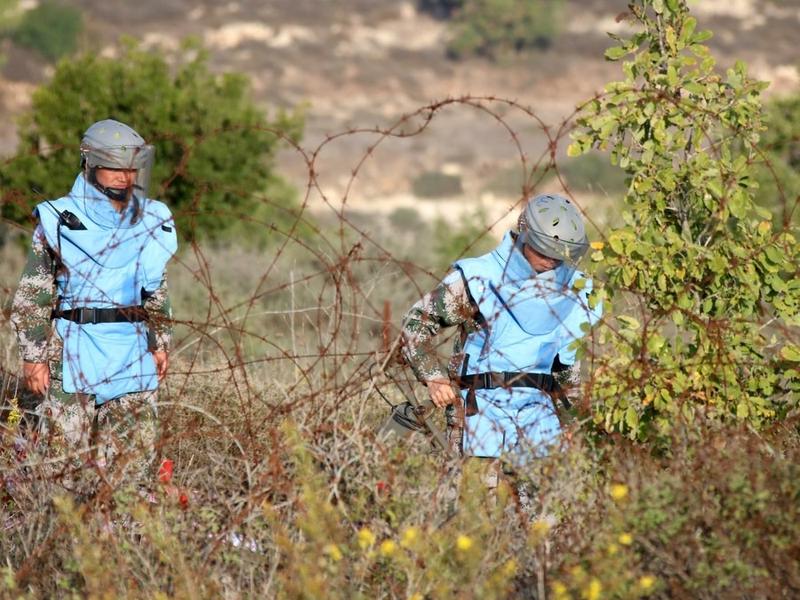 Over the past 30 years, China has dispatched over 40,000 peacekeepers to 25 operations. Sixteen Chinese military peacekeepers have sacrificed their lives for the noble cause of peace. The Chinese peacekeepers are highly commended by the UN and host countries for their strict discipline and professionalism.

With more than 2,500 peacekeepers on duty as of August 2020, China is the largest contributor of peacekeepers among the five permanent members of the UN Security Council.

In addition, in June 2016, the Chinese Ministry of Public Security set up a permanent peacekeeping police squad, the first of its kind in the world. 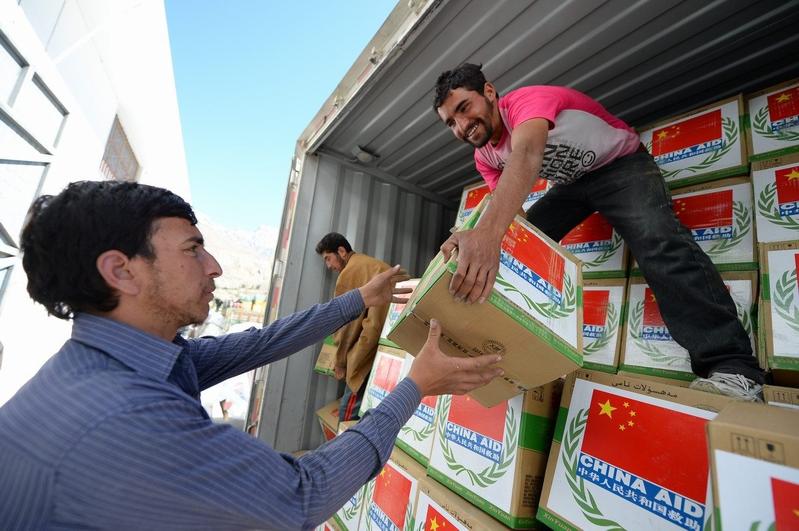 China seeks to advance both its own development interests and the shared interests of all nations. In the 40 years since 1978, when reform and opening-up began, more than 700 million Chinese people have been lifted out of poverty. This accounts for over 70 percent of poverty reduction worldwide.

Meanwhile, China has provided over 400 billion yuan in foreign aid and sent more than 600,000 aid workers to nearly 170 countries and international organizations. This is a big contribution to the global fight against poverty and to the development of all countries.

China is ready to share with other countries its experience in targeted poverty alleviation and eradication. Under the framework of South-South cooperation, China will continue to do its best to help other developing countries implement the 2030 Agenda. 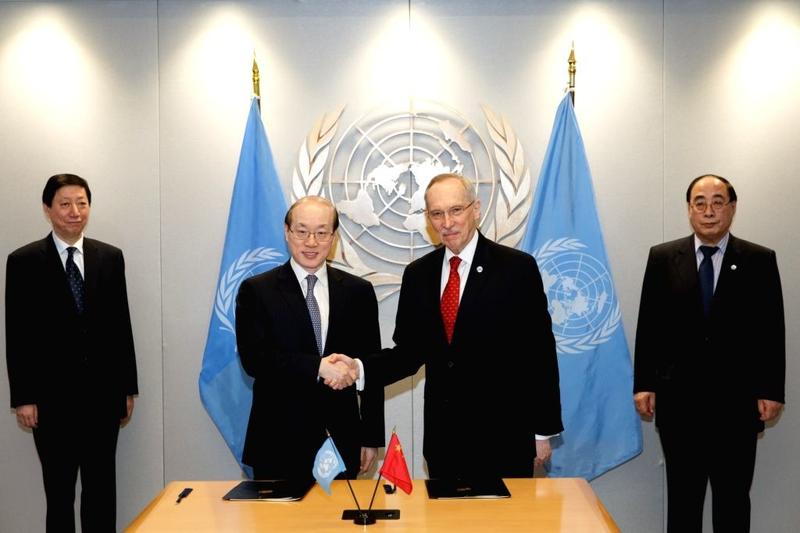 Liu Jieyi (left), then China's permanent representative to the UN, shakes hands with Edmond Mulet, the UN secretary-general's chef de cabinet, after signing an agreement covering a contribution of 200 million dollars from China to the UN to finance activities relating to peace, security and development, at UN headquarters in New York, May 6, 2016. (PHOTO / XINHUA)

China supports Secretary-General Antonio Guterres' efforts to reform the UN system in the areas of peace and security, economic development and internal management. The reform should be led by member states and give full consideration to the concerns of developing members.

Stable and predictable funding is crucial to keep the UN running. China believes that the "capacity to pay" principle should be upheld and calls on member states to pay their assessments for both regular budget and peacekeeping operations on time and in full.

Since 2019, China has become the second largest contributor to the UN's regular and peacekeeping budgets and will continue to fulfill its financial obligations.

In 2015, a China-UN Peace and Development Fund was established, marking China's strong support for multilateralism and for the UN. Since its launch, the fund has financed about 100 projects and become a new platform for China-UN cooperation. 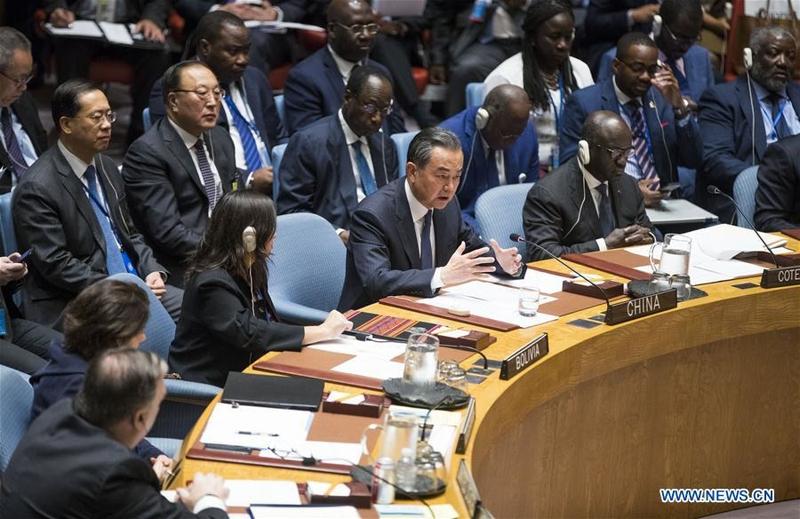 As a permanent member of the UN Security Council, China always stands on the side of peace, justice and the purposes and principles of the UN Charter.

On the Korean Peninsula nuclear issue, China stands for denuclearization, peace and stability on the peninsula and for a negotiated solution. 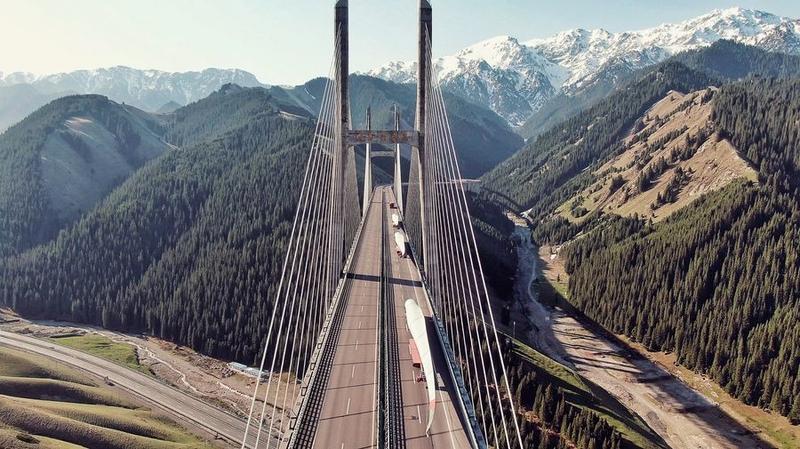 Belt and Road and international cooperation

As of January 2020, 138 countries and 30 international organizations have signed Belt and Road cooperation documents with China. The initiative has become the largest platform for international cooperation and a popular public good in the world.

China has hosted the first and second Belt and Road Forum for International Cooperation. Two separate lists of 279 and 283 practical cooperation deliverables were released at the two forums respectively.

During the second Belt and Road Forum for International Cooperation, a CEO conference was held for the first time, where participants signed project cooperation agreements worth over US$64 billion.

China also has initiated 20-plus platforms for multilateral dialogue and cooperation under the Belt and Road Initiative in areas like finance, ports, taxation, energy and environmental protection. 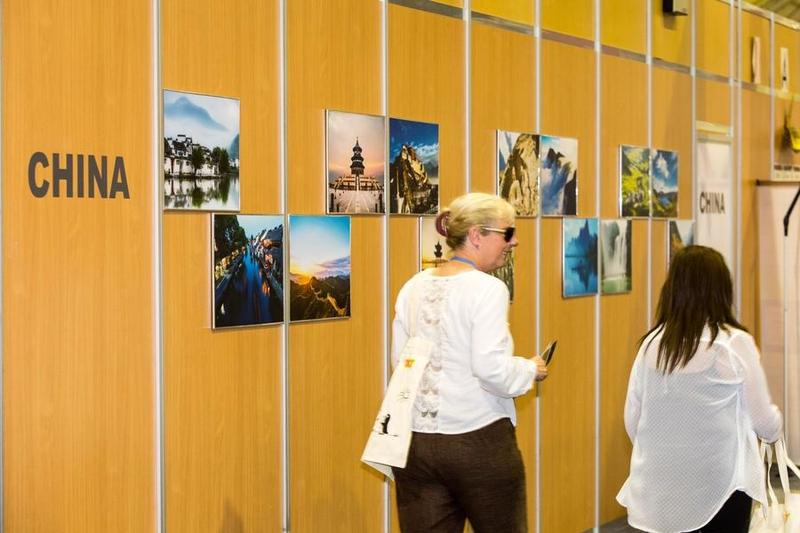 Pedestrians walk past a wall of photos featuring Chinese landscapes at the China Pavilion during the UN Climate Change Conference in Lima, capital of Peru, Dec 3, 2014. (PHOTO / XINHUA)

China is among the first signatories to the UN Framework Convention on Climate Change, and played an important part in the conclusion of the Kyoto Protocol and the Paris Agreement.

Since the adoption of the Paris Agreement, China has worked actively for its ratification, entry into force and implementation worldwide.

At the 2018 UN Climate Change Conference in Katowice, China encouraged all parties to take a constructive approach and show flexibility, and put forward its solutions to key issues, thus playing an essential role in seeing the implementation rules of the Paris Agreement adopted as scheduled.

China supports the initiative of Secretary-General Guterres to convene a UN Climate Action Summit. As a co-lead of the Nature-Based Solutions, China is working closely with all other parties for a productive summit.

China has stayed a participant in the international arms control treaty system. China is a party to over 20 international treaties on arms control. China follows a defense policy that is defensive in nature, and never takes part in any form of arms race.