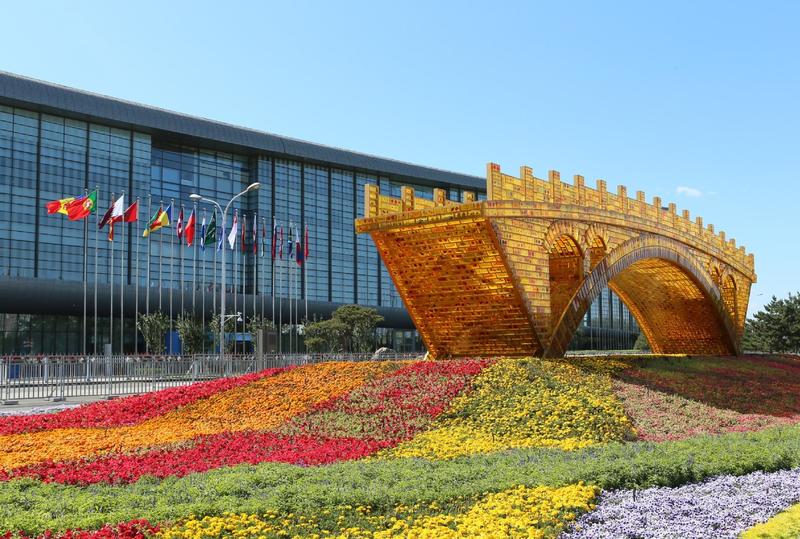 Photo taken on May 13, 2017 is the "Golden Bridge on Silk Road" structure in front of China National Convention Center in Beijing. (PHOTO / XINHUA)

When President Xi Jinping attended the high-level meetings for the 70th anniversary of the United Nations in New York in 2015, he called on the international community to remain committed to multilateralism and mutually beneficial cooperation for a better world.

Xi will participate in a series of high-level meetings for the UN's 75th anniversary via video link starting this week. Among them are a meeting commemorating the 75th anniversary of the UN and the general debate of the 75th Session of the UN General Assembly.

The past five years have witnessed dramatic changes in the international landscape featuring a battle between multilateralism and unilateralism as well as between cooperation and confrontation, observers said.

The United States administration's "America first" policy has undermined the international order established since World War II, while the different ways that countries respond to the unprecedented public health crisis have further widened the global divide, they said.

Zhou Fangyin, president of Guangdong University of Foreign Studies' School of International Relations, said that China would use the multilateral meetings to reaffirm its strong position in support of multilateralism and the fundamental role of multilateral institutions, including the UN and the World Trade Organization, in exercising global governance and upholding the international order.

While continuing to strengthen solidarity and international cooperation in fighting the unprecedented global public health crisis, Zhou said China would also reaffirm its commitment to extensive opening-up and stabilizing the industrial and supply chains in order to boost global confidence in recovering from the deep economic recession

Given the mounting tensions between Beijing and Washington, Zhou said China is likely to illustrate its policies and initiatives on dealing with relations between major countries to promote strategic stability in Sino-US relations, and ultimately avert the negative effects of increased strategic competition between the world's two largest economies on the international community.

While continuing to strengthen solidarity and international cooperation in fighting the unprecedented global public health crisis, Zhou said China would also reaffirm its commitment to extensive opening-up and stabilizing the industrial and supply chains in order to boost global confidence in recovering from the deep economic recession.

Since 2017, the US has been withdrawing from international treaties such as the landmark Paris climate agreement and the Iran nuclear deal, and international organizations such as UNESCO, the UN Human Rights Council and the World Health Organization. In stark contrast with the US, China strongly supports the UN, which has multilateralism as the core value of its charter.

China has contributed US$1.3 billion, the full amount of its financial obligations for the UN regular and peacekeeping budgets for this year. Following the start of the pandemic, China donated $50 million to the WHO to help it coordinate global efforts in combating the virus.

In his speech at the general debate of the 70th Session of the UN General Assembly, Xi underlined the need to build partnerships in which countries treat each other as equals, engage in mutual consultation and show mutual understanding.

Countries should abandon the Cold War mentality, foster a new vision of common, comprehensive, cooperative and sustainable security, and promote open, innovative and inclusive development that benefits all, he said.

Xi made it clear in his speech that China remains a champion of world peace, a contributor to global development and a promoter of the international order. He announced a host of initiatives to support the UN in promoting world peace and development. All of the initiatives have been delivered on the ground, according to the Foreign Ministry.

Among the initiatives, China has registered a standby force of 8,000 troops and a police squad of 300 troops for UN peacekeeping missions. As such, China has the biggest standby force and most varieties of contingents among all UN member states in the UN Peacekeeping Capability Readiness System. Over 2,500 Chinese "blue helmets" are deployed in nations including Mali and South Sudan.

Zhang Jun, China's permanent representative to the UN, said the UN is needed now more than ever to resist US unilateralism

A 10-year, US$1 billion China-UN Peace and Development Fund has provided total funding of US$67.7 million to over 80 projects. These projects have facilitated the UN's efforts in different areas such as peacekeeping, counterterrorism, energy, agriculture, infrastructure and education.

In addition, over the past five years, China has assisted other developing countries with hundreds of projects in poverty reduction, agriculture, trade facilitation, environmental protection and climate change, hospitals and educational and vocational training facilities. The South-South Cooperation Assistance Fund, which China established, has supported over 80 projects in more than 30 developing countries, injecting impetus into global sustainable development, according to the Foreign Ministry.

In a telephone conversation with UN Secretary-General Antonio Guterres in March, Xi said China will unswervingly support the UN and its work. He said that as the UN marks its 75th anniversary this year, China supports the international community in taking the commemorative events as an opportunity to renew the commitment to multilateralism and strengthening and improving the global governance system with the UN at its core.

Zhang Jun, China's permanent representative to the UN, said the UN is needed now more than ever to resist US unilateralism.

"The overwhelming majority of UN member states believe multilateral cooperation is crucial in addressing global challenges, and see the UN as essential. This demonstrates a clear choice of unity over division, cooperation over confrontation, mutual benefit over a zero-sum game," Zhang said in an opinion piece published by the South China Morning Post on Friday.

Tatiana Valovaya, director-general of the UN at Geneva, said global citizens have realized that all the economic and social challenges the world is facing need cooperation among participants in the multilateral system to find a global solution

Highlighting the need for the UN to defend multilateralism, fairness and justice, and mutually beneficial cooperation, Zhang said "commitments must be kept, rules must be followed, agreements must be fulfilled". He added that exceptionalism leads nowhere, and power politics does nothing but revive the law of the jungle.

Tatiana Valovaya, director-general of the UN at Geneva, said global citizens have realized that all the economic and social challenges the world is facing, such as COVID-19 and the climate emergency, need cooperation among participants in the multilateral system to find a global solution.

Saying that the Sustainable Development Goals are priorities for the UN, Valovaya said she is absolutely sure that China could be a "crucial partner" in this work.

Christopher Bovis, a professor of international business law at the University of Hull in the United Kingdom, said China is keen to promote responsive and responsible political and economic leadership as the basis of sustainable development, which would strike a meaningful and workable balance between free trade and international and regional concerns, especially the elimination of poverty, raising living standards, combating inequality and combating the effects of the recent global pandemic.

China is committed to the functioning of a workable, fair and sustainable international trade system, and now has a bigger role to play in fostering the UN and its agenda of sustainable development while promoting peace among nations, Bovis said.