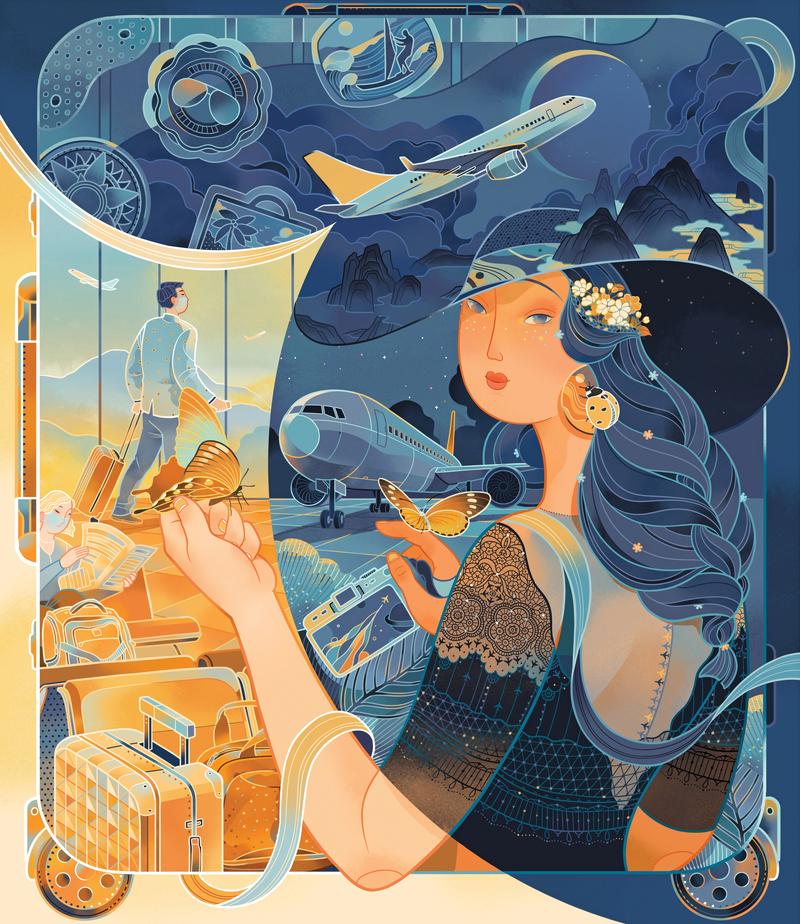 Even if a vaccine is found for COVID-19, it will not alter the fact that our lives have been changed forever.

Nothing will be the same, especially how we travel the world.

Bruce Thompson, dean of the School of Health Sciences at Swinburne University of Technology in Melbourne, Australia, said: “Everything will change. It has to.”

Should a vaccine be found, he doubts people will be eager to board aircraft for long-haul flights in the foreseeable future.

“From the minute we walk into an airport, things will be different,” he said.

Screens will separate staff from passengers. Checking in and clearing customs and immigration will take longer.

“If you thought the lines were long now, wait until the curtains lift post-pandemic,” Thompson said.

Shopping and eating at airports will change, as will departure gate waiting areas.

Airline lounge buffets will disappear. Temperature scans throughout an airport will become the norm.

Airlines are considering boarding from the rear — economy through to first class.

In April, United States carrier Delta began boarding flights by row from the back of planes to the front, with passengers asked to stay seated until their row was announced.

With international aviation largely shut down, airlines are experiencing huge losses. Aircraft have been left on desert airstrips around the world, while thousands — maybe millions — of workers have been laid off, from pilots to baggage handlers.

Forecasts for when the sector will return to pre-COVID-19 levels span a few years to never.

According to the International Air Transport Association, the global airline trade association, it may not achieve last year’s levels until at least 2024.

“Even this number is on the optimistic side,” said Ian Douglas, honorary senior lecturer with the School of Aviation at the University of New South Wales in Australia.

“Even if demand starts to come back, there will be less capacity available for long-haul flying … and probably smaller short-haul fleets with order cancellations,” he said.

Airlines and aircraft manufacturers are exploring how to make flying virus-free.

Airbus has launched a campaign called ‘Travel with trust’, with Jean-Brice Dumont, its executive vice-president for engineering, saying: “We are bringing you solutions for a safe and healthy journey so you can continue trusting in air travel, from the moment you consider boarding an aircraft to the minute you leave the airport.”

The manufacturer is examining the feasibility of ‘fogging’, also known as spraying or misting, to spray disinfectant on aircraft surfaces.

It is also studying thermal treatment, where an aircraft cabin is heated between flights to temperatures much higher than ambient levels.

For carriers, social distancing on aircraft, along with clean air and cleanliness, will be paramount.

Using face masks aboard planes is still being debated by airlines.

Some airlines will test passengers at departure gates. Anyone showing signs of fever will not be allowed to board.

Some German airports, including those in Munich and Frankfurt, are encouraging passengers to reduce the size of their carry-ons, creating a fast lane for those with small, single items. The Indian government is considering totally banning carry-ons.

These factors mean rising costs for airlines and inevitably, the traveling public. 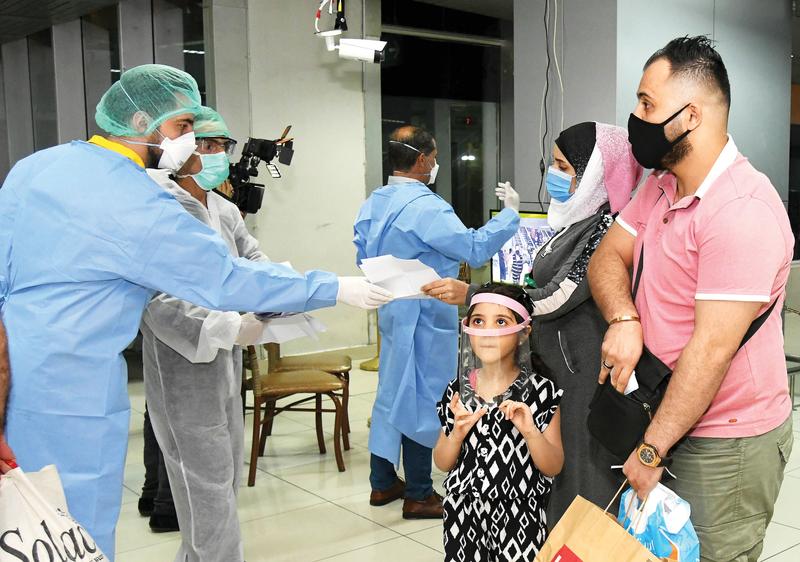 Swinburne University’s Thompson said: “It will be hard. I don’t think anyone has got their head around it at the moment.”

He said the introduction of vaccination cards — issued some 40 years ago for such diseases as typhoid and yellow fever — is highly likely.

Li Xiang, director of the US-Asia Center for Tourism and Hospitality Research at Temple University in Philadelphia, US, said people are anxious to resume traveling after extended lockdowns, but also more cautious and will not come flooding back.

“I expect they will be more safety sensitive than price sensitive … at least for a while.”

Li expects the public will switch to a “lighter” way of traveling and vacationing.

“They will take shorter excursions closer to home and adopt a DIY style of travel such as private transportation, recreational vehicles and camping, or visiting friends and relatives.”

“While lowering price is intuitively effective, offering value and adding service elements is a better solution.

“However, as some countries have been able to control their domestic COVID-19 case numbers, domestic air travel has begun to recover in some key APAC countries, including China and South Korea.”

The collapse of international passenger traffic and the effect on their balance sheets have been devastating for APAC airlines, with many seeking government bailouts or other forms of capital injection.

Virgin Australia has entered voluntary administration, with Bain Capital acquiring the airline, while Thai Airways is being restructured under the supervision of a bankruptcy court.

Many will require further government support or capital injections from the private sector through raising new debt financing or by selling equity stakes to avoid bankruptcy.

Airlines in countries with relatively large domestic air travel markets, such as China and Japan, enjoy better situations. Travel in these countries has improved in recent months, providing some revenue flow.

In China, domestic air passenger volume in the first half of 2020 was down by about 50 percent year-on-year. This indicated a substantial rebound in activity given the scale of nationwide lockdowns and travel restrictions imposed during February and March.

Seeing no end to international travel bans in the region, Biswas said APAC airlines have suffered “tremendous financial damage to their balance sheets”.

“Hopes for a recovery in APAC air travel are increasingly being linked to the rollout of COVID-19 vaccines, with the timing still very uncertain about when this will happen,” he said.

The near-term financial stress for airlines will continue to mount.

“In the medium term, if the pandemic fades away with the rollout of vaccines, then a gradual normalization of air travel could occur in step with mass vaccination programs,” he said, adding international air travel could recover in 2021, assuming the vaccines are effective.

“This would allow a return to the more-positive medium-term growth outlook for Asian commercial aviation, driven by strong growth in tourism and business air travel, which had been occurring during the decade prior to the pandemic.”

The tourism industries across APAC, badly hit by lockdowns and travel bans, have collapsed in many countries including Singapore, Malaysia and Indonesia, which rely heavily on international travelers.

Many countries are also feeling the effects of the collapse in conferences and events, which is hitting hotel revenue hard in Singapore and Thailand.

Due to international travel bans across APAC, Biswas said overseas tourism in the region is unlikely to restart until mass COVID-19 inoculation programs are implemented.

“This is in contrast to Europe, which already had a full-blown pandemic and has reopened since June for tourism and air travel throughout the EU and with selected other countries with a low number of daily cases.”

With APAC international travel unlikely to resume on a large scale in the near term, limited, quarantine-free travel corridors have been considered between countries with no new COVID-19 cases for long periods.

But recent cases in Vietnam and New Zealand, which had no infections for more than three months, have reduced the likelihood of such plans being realized soon.

Even if a COVID-19 vaccine is approved before the end of 2020, mass inoculation programs across the region are unlikely to be completed until mid-2021, if not later.

This means the region’s tourism industry will face financial distress for another nine to 12 months, shuttering many small to medium-sized businesses in the sector and permanently closing numerous hotels.

No one expects travel to return to how it was pre-COVID-19, but one thing is certain — the future will be very different.