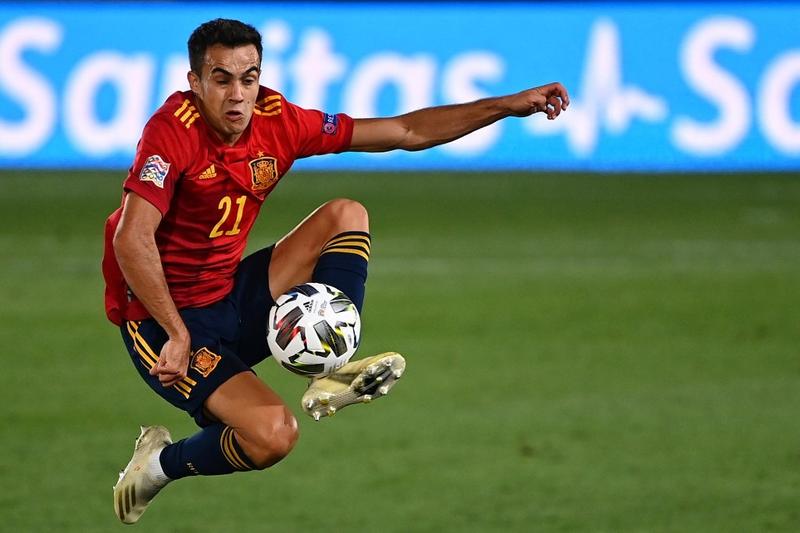 Spain's defender Sergio Reguilon controls the ball during the UEFA Nations League A group 4 football match between Spain and Ukraine at the Alfredo Di Stefano Stadium in Madrid on Sept 6, 2020. (GABRIEL BOUYS / AFP)

MADRID - Real Madrid and Tottenham have reached an agreement for the sale of Madrid's Spain international left back Sergio Reguilon to the north-London based club.

Sergio Reguilon broke into the Real Madrid first team in the 2018-19 season, making 22 appearances and moving ahead of the Brazilian left back Marcelo in the pecking order

Reguilon will cost the Spurs 30 million euros, and according to Spanish sports paper Diario AS, has agreed a deal until the end of June 2025 with Real Madrid reserving the right to buy him back for 40 million euros before the summer of 2022.

Reguilon broke into the Real Madrid first team in the 2018-19 season, making 22 appearances and moving ahead of the Brazilian left back Marcelo in the pecking order.

However, the return of Zinedine Zidane saw Marcelo return to favor and the signing of Ferland Mendy in 2019 saw Reguilon loaned to Sevilla (who are now coached by former Madrid boss Julen Lopetegui), where he played 38 times and scored three goals as Sevilla finished fourth in La Liga and won the Europa League for the sixth time in the club's history.

The 23-year-old's displays last season earned him his first cap for Spain on September 6th as he started in his country's 4-0 UEFA Nations League win against the Ukraine.

The Spanish press also report on Wednesday that Real Madrid and Tottenham are also talking about a loan deal to see Gareth Bale go back to White Hart Lane, seven years after leaving the club to join Real Madrid.

The 31-year-old recently commented that he would like to return to the Premier League and said Madrid had blocked previous attempts to leave.

Any deal would almost certainly see Real Madrid continue to pay part of the wages of a player whose relationship with coach Zinedine Zidane has broken down completely in recent months.