Editor’s Note: Xinjiang Development Research Center, a think tank set up in 2019, released an essay on Sept 3 to refute a German scholar’s so-called report on Xinjiang’s population. Full text below: 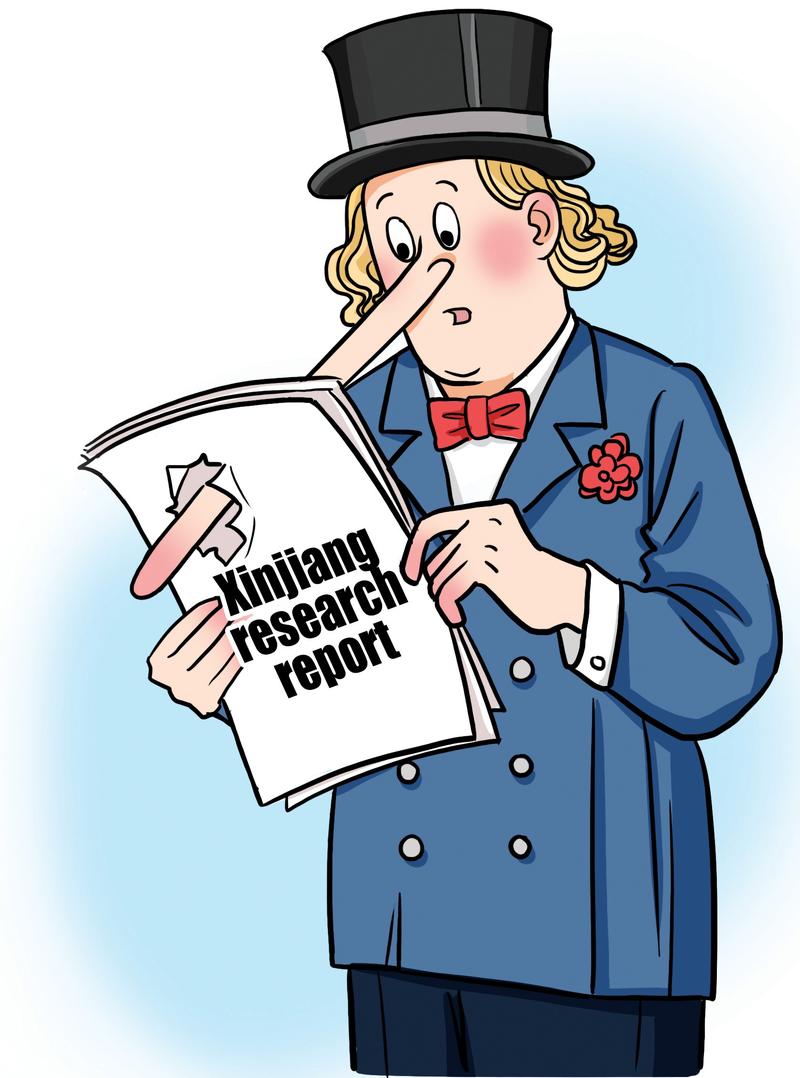 His findings are not derived from academic research methodologies and run counter to the reality in Xinjiang. The truth is Xinjiang’s Uygur population has been increasing. The rights of all residents in the region, including those of Uygurs, have been protected during the law-based implementation of the family planning policy.

Xinjiang’s population has continued to grow in recent years, and the birth rate of the Uygur population has been higher than Xinjiang’s average level. Zenz’s claim that government policies in Xinjiang represent a “demographic campaign of genocide” has no basis whatsoever.

The data from 2010 to 2018 show Xinjiang’s total population has increased steadily, including that of the Uygur population, whereas the Han population in the region has registered just a meager increase.

The decline of Xinjiang’s population growth in 2018 is the result of the full implementation of the family planning policy, which also reflects Xinjiang’s economic and social development and the changing attitude towards childbearing among all ethnic groups.

Before 2017, the family planning policy was not implemented adequately in the region’s southern prefectures such as Kashgar and Hotan, which resulted in more newborns than the policy allowed. In recent years, during Xinjiang’s poverty alleviation campaign, home visit and information soliciting have identified and registered a large number of children born outside of the policy, accounting for 20 percent of the newborns registered in that year, echoing the estimations of health and statistics authorities.

Meanwhile, as the poverty alleviation campaign advanced, living and production conditions have improved significantly in southern Xinjiang. Urbanization has accelerated and more people live in urban areas, people’s education and cultural level have also improved a lot, and their attitude toward childbearing has changed, with more people favoring delayed marriage and fewer children.

Family planning is a basic State policy of China. The implementation of the family planning policy in Xinjiang has promoted the long-term, balanced development of its population. The current population growth patterns conform to the objective law of economic and social development.

Xinjiang is an arid region with severe desertification problems. An average of 48,300 cubic meters of water is produced per square kilometer in Xinjiang, which is only 16.7 percent of the national average (29,000 m3/km2). Of the Xinjiang region’s 1.66 million sq km, oases account for only 0.17 million sq km. In the southern part of Xinjiang, due to the rapid growth of the population, farming land has become a scarce resource. In 2018, per capita farming land in the four southern prefectures was 2.32 mu (1,547 square meters), which is only 67.78 percent of the world’s average.

Due to the “three evil forces” of terrorism, separatism and extremism, for a long time the family planning policy could not be fully implemented in the southern prefectures of Kashgar and Hotan. In addition, many were born outside of State family planning policy and marriage, which led to a rapid population rise in Xinjiang, causing the inappropriate allocation of limited natural resources and placing a huge burden on households.

In order to resolve the problems of water and farmland allocation and to enable the people of Xinjiang to lead a better life, Xinjiang needed to implement the family planning policy to foster the long-term and balanced development of the population so as to promote the sound development of Xinjiang society and its economy.

After implementing the family planning policy in Xinjiang, the pressure due to the rapid rise of the population has been alleviated, and the health condition of people from various ethnic groups, particularly women and children, has improved. Xinjiang’s maternal mortality rate was down from 43.41 per 100,000 in 2010 to 26.65 per 100,000 in 2018, the infant mortality rate declined from 26.58 permil to 14.02 permil. Xinjiang’s average life expectancy was 74.82 years in 2015.

The trend of world population development shows that as the level of economic and social development of an area rises, the fertility rate and the natural growth rate of the population will decline.

With the continuous development of Xinjiang’s economy and society, the living conditions of people of all ethnic groups, including residences, education, medical treatment and employment have undergone fundamental improvements, which has promoted the decline in the fertility rate and the natural growth rate. The birth rates in Xinjiang dropped from 22.55 permil, 7.69 permil and 14.86 permil in 1978 to 10.69 permil, 4.56 permil and 6.13 permil in 2018, respectively. Xinjiang’s population development has entered a modern population growth type featuring low birth, low death and low population growth rates.

Xinjiang implements the family planning policy according to the law, and people independently choose safe, effective and appropriate birth control measures. There has been no “mandatory sterilization” in the region.

From 1975, the family planning policy was implemented first in predominantly Han-populated cities such as Urumqi. “Provisional Regulations on Several Issues of the Family Planning Policy” was published in 1981, starting with the policy for Han couples. “Measures for the Implementation of Family Planning of Xinjiang Uygur Autonomous Region” was published in 1992, according to which urban Han couples could have one child and rural Han couples could have two; while urban couples of ethnic minority groups could have two children and those in rural areas can have three.

In 2017, Xinjiang revised its population and family planning regulations, applying a uniform policy to all ethnic groups, whereby urban couples can have two children and rural couples can have three. As can be seen, the family planning policy was implemented toward ethnic minority couples 17 years later than it was to Han couples, and it is still more relaxed compared to China’s other provinces.

In recent years, Xinjiang has taken measures in accordance with the law to implement the family planning policy by promoting management, scaling up policy publicity and advocacy, and providing quality services and so on, which has had remarkable results. People make independent choices on safe, effective, and proper contraception practices. Women of childbearing age voluntarily take tubal ligation and use intrauterine devices (IUDs), especially those who have completed their childbearing but not taken birth control measures since 2014.

Some areas like Hotan prefecture have applied the principle that combines voluntary participation with technical guidance, encouraging people to choose long effective contraceptives that are suitable for themselves. For a period of time, there was a spike in tubal ligation and IUDs out of people’s voluntary choice, as the practice has proven that, among all kinds of contraceptives, tubal ligation and IUDs are internationally recognized, safe and enduring methods with few side effects but high effectiveness. And such contraceptives have been widely used in other areas in China and are also accepted willingly by childbearing women in Xinjiang.