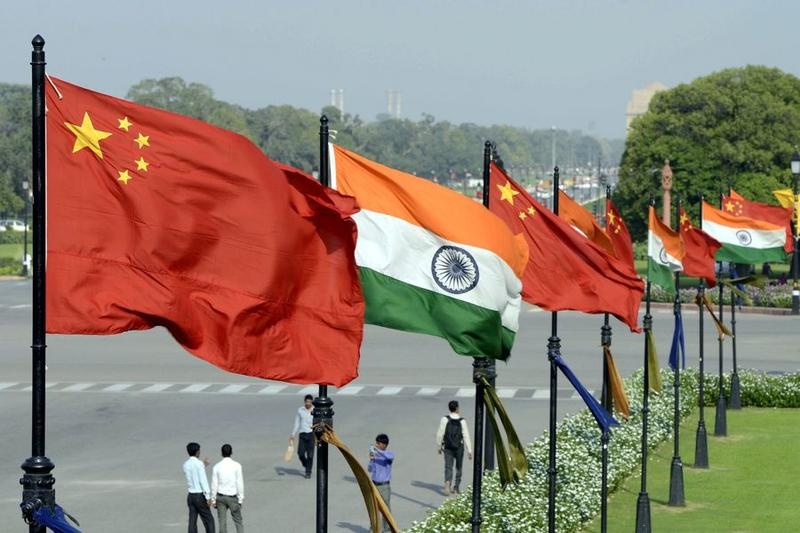 This undated photo shows Indian and Chinese national flags flutter side by side at the Raisina hills in New Delhi, India. (PHOTO / XINHUA)

The Ministry of Commerce said on Thursday that it was firmly opposed to the Indian government's decision to ban 118 Chinese apps and urged the neighboring country to desist from such actions against Chinese enterprises.

The Indian government is abusing the concept of national security, and has adopted discriminatory and restrictive measures against Chinese enterprises, which are in violation of the World Trade Organization rules, ministry spokesman Gao Feng said during a news briefing.

"The Chinese government insists that all Chinese companies operating abroad abide by international rules and work in accordance with the laws and regulations," Gao said.

"The Indian government's decision will not only harm the legitimate rights and interests of Chinese investors, but will also be detrimental to Indian customers and the overall investment environment in the country."

According to Gao, cooperation between the two countries in areas like trade and economy have been mutually beneficial with win-win outcomes. "It is hoped that India and China would jointly maintain the hard-won cooperation and development gains and create an open, fair and just business environment for international investors and service providers, including Chinese companies," Gao said.

The Indian government's decision will not only harm the legitimate rights and interests of Chinese investors, but will also be detrimental to Indian customers and the overall investment environment in the country.

Gao Feng, spokesman for the Ministry of Commerce

Gao made the remarks after the Indian government through its Ministry of Electronics and Information Technology announced a ban on 118 Chinese apps which it said were "engaged in activities prejudicial to the sovereignty and integrity of India, defense of India, security of the state and public order".

Raymond Wang, a global partner at consultancy Roland Berger, said the bans are part of the Indian government's move to counter China's growing presence in the country's IT market amid rising tensions and increasing competition in the digital economy.

Wang said many Chinese internet companies have invested heavily in India and created several growth opportunities in the country. "In the long run, China will continue to be among the global leaders in the mobile internet sector. The bans will leave less room for cooperation with leading Chinese internet powerhouses, which will in turn influence Indian IT development," he said.

This is not the first time that the Indian government has restricted apps with links to China. In June, it blocked 59 Chinese apps which was followed by another ban on 47 more Chinese apps in July.

Wang Peng, a distinguished research fellow with the Center for Hong Kong, Macao, Taiwan and World Affairs at the Communication University of China, said the bans are a reminder for Chinese companies that they should be aware of the potential political risks when expanding abroad.

Zhou Xibing, a Chinese researcher who has written extensively on the internationalization of Chinese companies, said the bans on Chinese apps will not affect Chinese firms' ongoing global efforts and there is plenty of room for their further expansion.