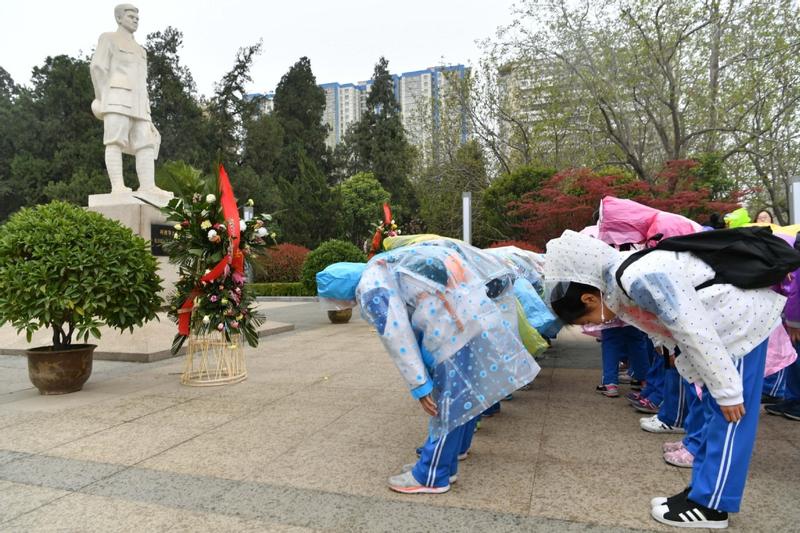 SHIJIAZHUANG/NEW DELHI－A bronze statue of an Indian man erected outside a medical school in North China is to be formally unveiled early next month. When passers-by look up, they might not recognize the face but most of them have heard the name: Ke Dihua.

Ke Dihua is a household name in China. With his full name being Dwarkanath Kotnis, he was one of five Indian physicians sent to China to provide medical assistance during World War II, where he breathed his last breath.

Apart from the school named after him as the Shijiazhuang Ke Dihua Medical Science Secondary Specialized School, there are memorials of Kotnis in both Shijiazhuang, the capital of Hebei province, and Tangxian county where he once worked.

"We were astonished to see how the Chinese people did not forget their foreign friends who helped them in their anti-fascist and liberation struggle," says Mrigendranath Gantait, president of the Dr Kotnis Memorial Committee in West Bengal, India, once after a tour to China.

Kotnis was born in 1910 to a middle-class family, and studied medicine before coming to China in 1938, one year after China began a fullscale resistance against the aggression of Japanese invaders.

"At that time, China was in tremendous difficulty," says Lou Yue, a research fellow with the North China Martyrs' Memorial Cemetery who spent years studying the life of Kotnis.

"We had an acute shortage of practitioners and medicines," she says."Many injured soldiers died or were crippled because they couldn't receive timely treatment."

"At the request of Chinese leader Zhu De, the Indian National Congress, under the leadership of Jawaharlal Nehru and Subhas Chandra Bose, sent a five-member team of doctors on behalf of the Indian people to China to show solidarity with the Chinese in their fight against Japanese fascist aggression," says Gantait.

Lou can tell many stories about Kotnis, collected from ordinary people. "He helped his patients with food. He was careful and quick while changing dressings so that the wounded wouldn't feel too much pain. He gave his horse and hat to patients on the march," she says.

Kotnis was so hardworking that during one battle in 1940, he performed operations for up to 72 hours, and treated more than 800 patients in 13 days.

"Despite hearing news of his father's death, he did not return to India. Instead, he reaffirmed his commitment to continue his work in China. Such mental strength for a peoples' cause is exemplary," Gantait recalls.

The efforts of Kotnis won him the nicknames "Dr Thoughtful" and "Old Ke", a way the Chinese used to refer affectionately to their friends.

In 1941, he was appointed as director of the Dr Bethune International Peace Hospital, named after the famous Canadian surgeon Norman Bethune. After his appointment, he performed about 2,000 operations.

Without textbooks, Kotnis would compile them himself.

On the evening of Dec 8, 1942, when he was writing on page 173 of his second surgery textbook, he collapsed, with the pen leaving a long line on the paper. He later died of epileptic seizures at the age of 32.

"He made his highest sacrifice by giving his life for the cause of the Chinese peoples' liberation movement," says Gantait.

Late Chinese leader Mao Zedong was deeply affected by his death. He wrote in his eulogy that "the army has lost a helping hand, the nation has lost a friend. Let us always bear in mind his internationalist spirit".

More than 3,000 km away in Shijiazhuang, the legacy of Kotnis has also been handed down in a school.

Hu Bangzhong, a researcher who has helped prepare the founding of the Kotnis memorial in Shijiazhuang since 1975, retired in 1990. Bored with solitary life at home, he got a job at a local school.

One day a friend asked him why he never founded his own medical school.

Years of research had planted the stories of Kotnis deep into Hu's mind. It suddenly occurred to him that perhaps he could start a medical school, and name it after the revered Indian doctor.

He then wrote a letter to the wife of Kotnis, Guo Qinglan. Ten days later he received a reply. Guo was happy to be the honorary president of the school.

According to Liu Wenzhu, an official of the Shijiazhuang Ke Dihua Medical Science Secondary Specialized School, since the founding of the school in 1992, more than 45,000 medical professionals have graduated from it.

Each of the new students and staff must swear in front of a stone statue of Kotnis that they would work like him.

Liu hopes that Kotnis will be remembered not only as a symbol inspiring medical students to work hard, but also an eternal bond between the peoples in China and India.

"We are the world's two most populous countries ... We should always be friends, coexisting peacefully," he says.

The wish was shared by Gantait, who noted that the two countries should strengthen exchanges and cooperation in various fields, which is "the right tribute" to the celebration of the 75th anniversary of the victory of the Chinese People's War of Resistance Against Japanese Aggression this year, and the 70th anniversary of the establishment of diplomatic relations between India and China.