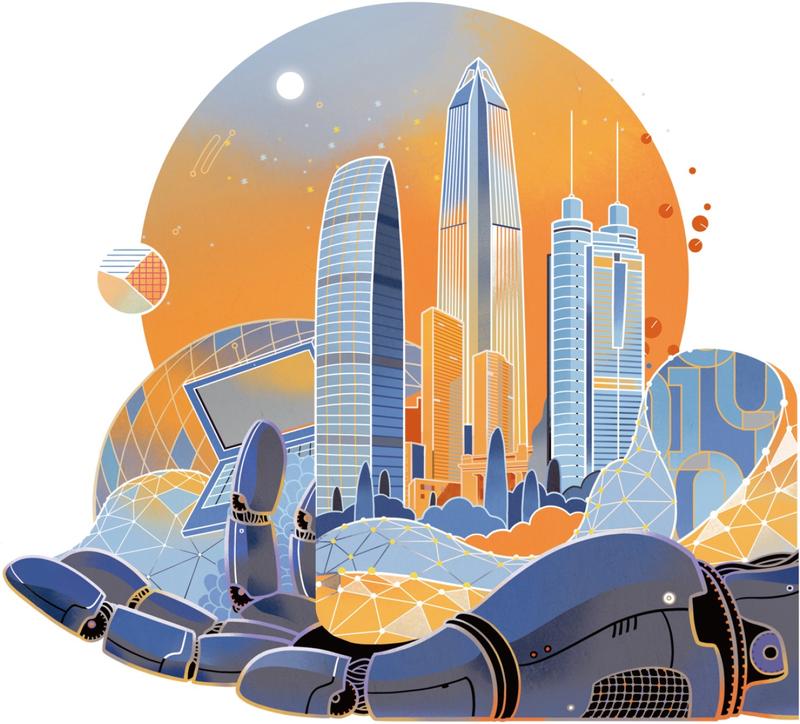 Paced by strong economic growth, industrialization and urbanization, which took the West almost a century to achieve, have occurred in China in just a few decades, following more than a century of colonial intrusions.

Nothing exemplifies the success story more than Shenzhen.

In 1979, Shenzhen was a poor fishing and market town with some 20,000 people struggling at the subsistence level. It was a rural backwater, next to the modern and thriving Hong Kong. Yet in less than half a decade, per capita GDP of Nanshan, a district of Shenzhen, has reached US$49,000, the highest for any district in China, overtaking Hong Kong, and catching up with Singapore.

Today, Shenzhen's urban population hovers around 14 million, while the metro area is some 10 million larger. The megacity's GDP is US$390 billion, which－if Shenzhen were a country－would include it among the top 30 economies of the world.

More importantly, Shenzhen's per capita GDP has surpassed US$30,000, even at the nominal level, and is at par with that of the Republic of Korea and Spain.

What accounts for such an "economic miracle"? The key to Shenzhen's transformation is Deng Xiaoping's reform and opening-up policy－most notably, the rise of special economic zones (SEZs).

Shenzhen was China's first major SEZ experiment in which special tax incentives were offered for foreign investments and the companies enjoyed greater independence from the central government in international trade. Driven by market forces, the products manufactured in the city were mainly export-oriented.

Embracing reform, Shenzhen developed its four pillar sectors of advanced technology, supportive finance, efficient logistics, and entrepreneurial culture. Today, it hosts some of the world's most advanced information and communication technology giants, including Huawei, Tencent, ZTE and the drone-maker DJI.

In addition to "China's Silicon Valley," Shenzhen is seen as one of the world's top-10 financial centers housing mighty financial institutions. In logistics and transportation, its courier giants (SF Express), shipping companies (CIMC), ports and railway networks are some of the busiest in the world, while real estate accounts for one-tenth of its economy.

Shenzhen's GDP surpassed that of neighboring Hong Kong a couple of years ago. In the Chinese mainland, it ranks third, right after Shanghai and Beijing. And with growth at 6.7 percent last year, it is still expanding two to three times faster than Hong Kong and Singapore, and the stagnating metropolises in the West.

If Guangdong province is the trendsetter in global innovation today, Shenzhen is the very center of its technology progress. Measured by research and development as a percentage of GDP, China's innovation expenditure has steadily climbed to about 2.2 percent. Despite the huge population, it puts the mainland ahead of Singapore and Australia, and far ahead of the United Kingdom and Canada.

In relative terms, China's R&D per GDP is already twice as high as that of Italy and France. In Guangdong, which has a population of 115 million, the comparable R&D figure is more than 2.7 percent－right behind Germany but ahead of the United States.

In Shenzhen, however, R&D per GDP is even higher－estimated at 4.2 percent－which puts it right behind the current world leaders, Israel 4.9 percent and the ROK 4.3 percent.

Like Western Europe and Japan in the postwar era, Chinese companies in the past used to imitate the global technology leaders. But today, Chinese giants innovate, and their products and apps are copied by both their global competitors and cooperators.

Until recently, industrial transformation and innovation were driven by Shenzhen and supported by Guangdong and the Pearl River Delta region. But the region moved to a new stage when the blueprint of the Guangdong-Hong Kong-Macao Greater Bay Area was launched in February 2018.

The GBA is driven by multiple metropolises, intercity and regional railway networks, and several world-class airports, it comprises the nine cities of Guangdong－including Guangzhou, Shenzhen, Dongguan, Zhuhai and Foshan－and the special administrative regions of Hong Kong and Macao. It thus interconnects some 125 million people.

Just as San Francisco has its Silicon Valley in the Santa Clara Valley, the GBA aspires to become the sprawling economic engine in China.

Last year, Silicon Valley's GDP was US$275 billion, according to the US Bureau of Economic Analysis. As a regional giant, the GBA, which accounts for 40 percent of China's total exports, is already nearly three times bigger. Its combined GDP is US$810 billion.

Obviously, living standards remain significantly higher in Silicon Valley. But again, the US regional engine has evolved since the end of World War II, whereas the GBA has barely been born.

Perhaps the rise of China's high-tech sector is one reason why the US administration has expanded the trade war into the tech. Unlike previous US administrations, the incumbent one hopes to marginalize Chinese innovators in the US, neutralize their executives, sanction their international partners, and ultimately destabilize their broad global ecosystems.

Such a trade war against regional innovation engines in China, Europe, Japan and elsewhere violates the very rules of international trade. They reflect a desperate presidential re-election campaign, which has alienated most Americans and is undermining the role of the US as a responsible stakeholder in the world economy.

Not so long ago, international observers projected doom in Shenzhen because the forces that once boosted Guangdong's economic boom－industrialization, world trade and low-cost manufacturing－were fading. But they missed the big picture.

As industrialization decelerated, Guangdong was already moving into post-industrial society while transforming into an advanced manufacturing and global innovation hub. In that scheme, Shenzhen will have a central role as the global center for high-tech, innovation and venture capital, and social media.

In the short-term, the GBA will have to cope with adverse international headwinds but its time horizon is not based on quarterly results, or even four-year outlook. It is looking toward the mid-21st century.

The author is the founder of Difference Group and has served at the India, China and America Institute (USA), Shanghai Institutes for International Studies (China) and the EU Centre (Singapore).