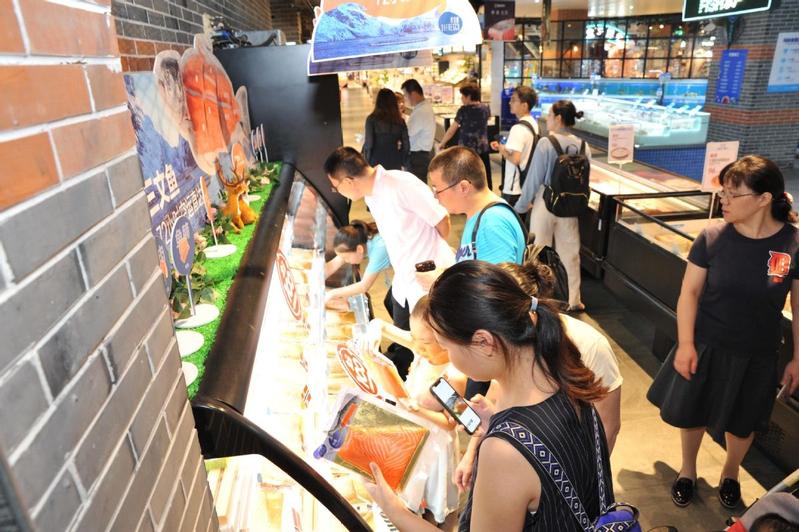 Consumers shop for imported salmon fillets at a Freshippo store in Shanghai. (PROVIDED TO CHINA DAILY)

BEIJING - Alibaba-owned supermarket chain Freshippo said on Saturday it has shut 21 of its Shenzhen stores and was requiring all its employees in the city to undergo tests for the novel coronavirus after three cases were found at one of its outlets there.

The new case in Guangdong involved a 41-year-old woman who sells yogurt at a supermarket run by Alibaba Group Holding in Shenzhen, the city's health commission said

One of the cases involved a 41-year-old woman who sells yogurt at a store in Luohu district, the city's health commission said late Friday night. Two other staff members of the store who later tested positive have yet to show any symptoms, local authorities said.

Health authorities in the region have sealed off the Freshippo store in the Luohu district and the residential compound the woman lives in. The supermarket operator Hema said it will sterilize the stores and test all its employees and fresh foods.

The local government is providing free testing for anyone who has visited the market in the past four weeks.

The emergence of local infections in the city comes just days after traces of the highly infectious pathogen was detected on frozen chicken wings imported from Brazil.

The virus has been found on the packaging of frozen shrimps from overseas through random testing, while imported salmon was also found to have been contaminated in a resurgence that led to more than 300 infections in Beijing in June.

It isn’t yet known how the supermarket worker contracted the virus and there’s little evidence that it can be transmitted from seafood.

Apart from the Shenzhen cases, the seven other locally transmitted cases were reported in Xinjiang Uygur Autonomous Region, the National Health Commission said in its daily report.

One new suspected COVID-19 case, which was imported from outside the mainland, was reported in Shanghai, and no deaths related to the disease were reported on Friday, the commission said.

As of Friday, the total number of confirmed COVID-19 cases on the mainland had reached 84,808, including 655 patients who were still being treated, with 36 in severe conditions

On Friday, 57 COVID-19 patients were discharged from hospitals after recovery, the commission said.

As of Friday, the total number of confirmed COVID-19 cases on the mainland had reached 84,808, including 655 patients who were still being treated, with 36 in severe conditions.

Altogether 79,519 people had been discharged after recovery, and 4,634 had died of the disease on the mainland, the commission said.

There were still three suspected COVID-19 cases on the mainland, it added.

According to the commission, 20,441 close contacts were still under medical observation after 1,905 were discharged on Friday.

The commission said 318 asymptomatic cases, including 175 from outside the mainland, were still under medical observation.