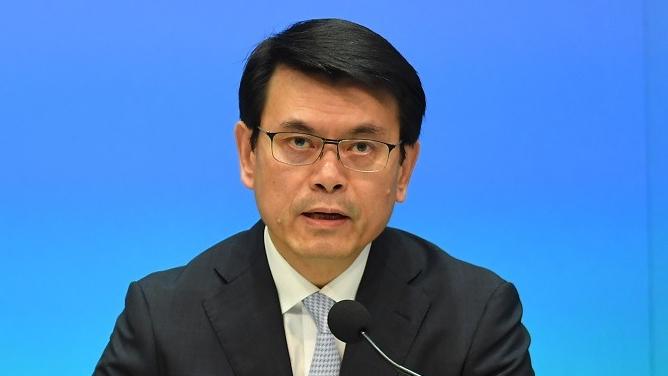 Yau said the new US Customs and Border Protection rule was basically asking Hong Kong traders “to tell a lie” when it requires HK-made products exported to the US to be labelled as made in China.

The new rule takes effect 45 days after it was published on the US Federal Register on Tuesday.

“By common sense, by international practices of origin rules, and by WTO (World Trade Organization) requirements, all these are exceptions and unacceptable,” Yau said during a media session after meeting with major local trade chambers.

“For a product made in Hong Kong, being a separate customs territory and a WTO member, we have to call a spade a spade. How could a Hong Kong-made product be mislabeled as (being from) some other places?” he said. "I think it defies common sense.”

Yau said the new rule was a “deliberate attempt” to undermine Hong Kong's separate customs status, “which is a very important pillar, for Hong Kong is an international trading centre which is well recognized by all members of WTO.”

“I hope the US would not be the exception because they are also a fellow member, together with Hong Kong, in WTO,” he said.

“So if there is something so blatant and irresponsible, it will only be our natural response to safeguard our interests under WTO to guard our separate customs territory which is given to us by the Basic Law under the ‘one country, two systems,’” he added.

Yau said the aggregate value of Hong Kong products exported to the US amounted to HK$3.7 billion last year.

“That constitutes less than 0.1 per cent of Hong Kong's total export which in a way represents the reducing significance of the US market to us,” he said.

Yau said that the new US rule would make things difficult not just for Hong Kong exporters but also for US importers.

“To individual companies or selected sectors, if they focus on the US market, this uncertainty, this chaos, this confusion would create difficulties to both the exporting end as well as the importing end,” Yau said.

“Trade is a two-way street. We are not talking about (just) one side selling. How could a buyer place an order to satisfy his customer with a wrongful description of the product and told by his own government?” he added.