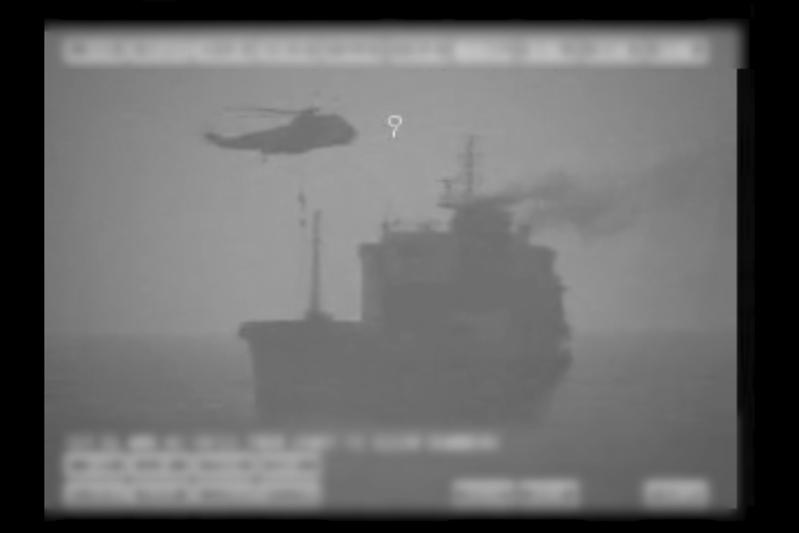 In this image made from video released by the US military's Central Command, Iranian commandos fast-rope down from a helicopter onto the MV Wila oil tanker in the Gulf of Oman off the coast of the United Arab Emirates on Aug 12, 2020. The Iranian navy boarded and briefly seized the Liberian-flagged oil tanker near the strategic Strait of Hormuz amid heightened tensions between Tehran and the US, a US military official said Aug 13, 2020. (US MILITARY'S CENTRAL COMMAND VIA AP)

Iranian special forces boarded a tanker in international waters for between four and five hours on Wednesday before releasing it, according to an US official familiar with the matter.

The Wila was in the Gulf of Oman and around 20 miles from the United Arab Emirates, said the official

Two Iranian ships were in the vicinity when the personnel roped down from a helicopter onto the Wila, a Liberian-flagged chemicals and oil-products tanker, around 5.30 pm Dubai time, said the official, asked not to be named because they’re not authorized to speak publicly.

The Wila was in the Gulf of Oman and around 20 miles from the United Arab Emirates, said the official. It passed through the Strait of Hormuz, a critical choke-point that borders Iran and accounts for about one-third of the world’s seaborne oil flows, on July 16, according to ship-tracking data compiled by Bloomberg.

While Iran regularly intercepts ships it alleges have entered its waters or are illegally smuggling fuel, the incident comes as US President Donald Trump looks to tighten United Nations sanctions on the Islamic Republic and renew an arms embargo.

The US military was only involved in monitoring and did not receive a distress call, the person said. US Central Command tweeted footage of the event on Wednesday.

The White House and National Security Council didn’t immediately respond to requests for comment. Neither did officials in Iran, while the Ministry of Foreign Affairs in Tehran didn’t answer calls during the Iranian weekend on Thursday.

Wila has been floating off the eastern coast of the United Arab Emirates for about a month and is now near Khor Fakkan port, according to the ship-tracking data. The vessel’s previous stop was around July 8 near the Iraqi oil terminal of Al Basra where its draft increased, indicating it picked up a shipment.

With a capacity of about 50,000 barrels, the Wila is small compared with the tankers that ship Middle East crude. Those can usually hold as much as 2 million barrels.

A larger oil ship anchored off Khor Fakkan sailed to Iran in July under mysterious circumstances. The crew of the 1-million-barrel Gulf Sky said it was hijacked. It left UAE waters on July 5 while under arrest pending a court decision on its ownership.

In May, the US intercepted US$23.4 million in payments from an entity it said was acting on behalf of the Islamic Revolutionary Guard Corps’ elite Quds Force to buy the Gulf Sky. It was the largest US seizure of funds from the organization. The loss of the vessel dealt a blow to the US’s efforts to contain Iran’s activities beyond its borders.

Iran has been accused of disrupting oil shipping near the Strait of Hormuz on several occasions since then. Four oil vessels were attacked with explosives in May 2019 while at anchorage off Fujairah, less than 15 miles from Khor Fakkan. Two more were sabotaged in the Gulf of Oman in June. Iran was blamed for the incidents but denied involvement.

The country’s navy seized a British oil tanker in the strait last year for about two months, triggering volatility in oil prices.

The US has recently stepped up efforts to limit trade between Iran and Venezuela, which is also under American sanctions. Five Iranian tankers carrying a total of 1.5 million barrels of gasoline arrived in Venezuela in May and June. US prosecutors last month said they’re seeking to seize gasoline on board four more Venezuela-bound Iranian vessels.