PSG vs Atalanta: A David & Goliath tie, that could see a surprise 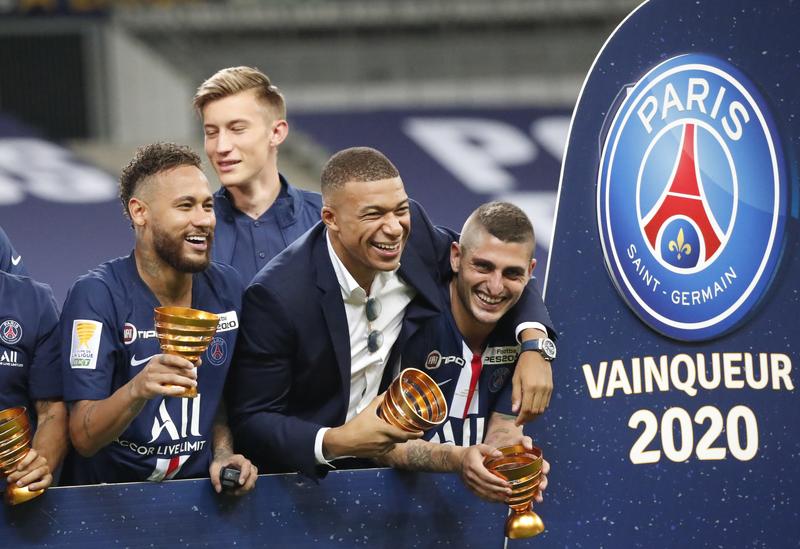 PSG's Kylian Mbappe, centre, who did not play due to an injury, celebrates with his teammate Neymar, left, and other teammates, after winning the French League Cup, following the soccer final match against Lyon at Stade de France stadium, in Saint Denis, north of Paris, July 31, 2020. (FRANCOIS MORI / AP)

MADRID - Italian side Atalanta and Paris Saint Germain kick off the quarter-finals of a Champions League much altered by the coronavirus in Lisbon on Wednesday night in what on paper looks like a 'David against Goliath' encounter, but which in reality could prove to be a surprise.

Atalanta look well equipped to exploit any weakness in their rival, with Gian Piero Gasperini's men basing their game around intense pressing and swift counter-attacks

Big spending PSG have time and again failed to get into the semi-finals of the competition under their big-spending Qatari owners, while Atalanta have been underdogs all the way through the competition.

The Italians have an annual revenue of just under 190 million euros, while PSG can boast over three times that with 636 million and have won the treble in France four times in the last six seasons.

However, for all their domestic success, PSG have always looked 'top-heavy' with too much weight placed on their two star players, Neymar Jr and Kylian Mbappe. Although they do look better balanced with Thomas Tuchel in charge, they still at times give the impression of being a star vehicle than a football team.

Mbappe might not even play on Wednesday after suffering an ankle injury in the French Cup final in July. Although he has recovered faster than expected, Tuchel has commented that it would be a "miracle" for him to play 90 minutes and the best that can probably be expected is to start on the bench as an impact sub.

Another problem for the French side is that while Italy's Serie A returned to action after the COVID-19 lockdown, France's Ligue 1 didn't, meaning that PSG go into this vital game with just two matches in the last five months. That is likely to be a factor - especially if the tie goes into extra time.

Atalanta look well equipped to exploit any weakness in their rival, with Gian Piero Gasperini's men basing their game around intense pressing and swift counter-attacks.

If PSG are sluggish at the back and in the middle (as looks likely given their lack of football), players such as Josip Ilicic, Mario Pasalic and Alejandro Gomez could run riot as they did when the side from Bergamo put eight past Valencia in two games of the last 16, with Ilicic scoring four times in Valencia's Mestalla Stadium.